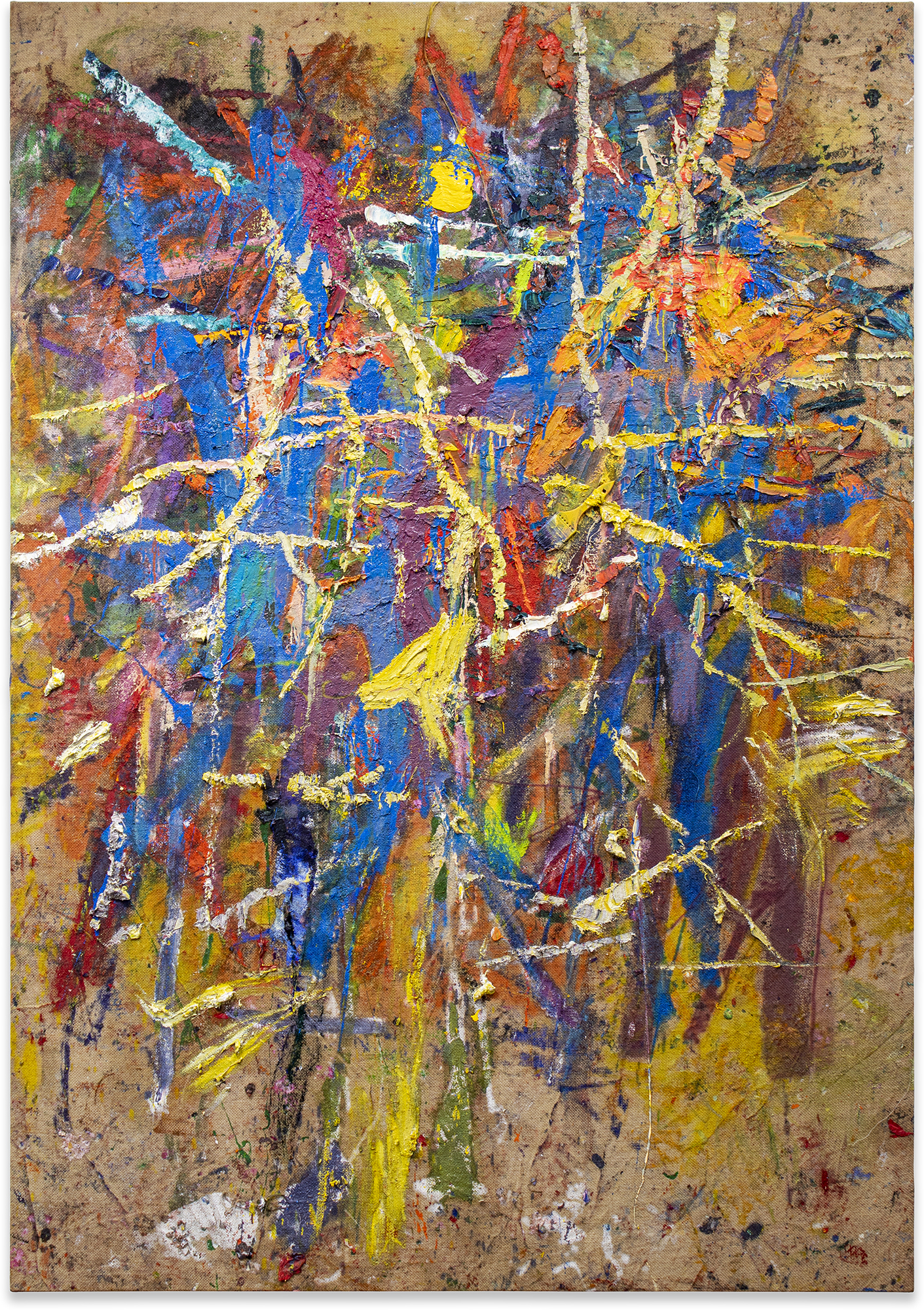 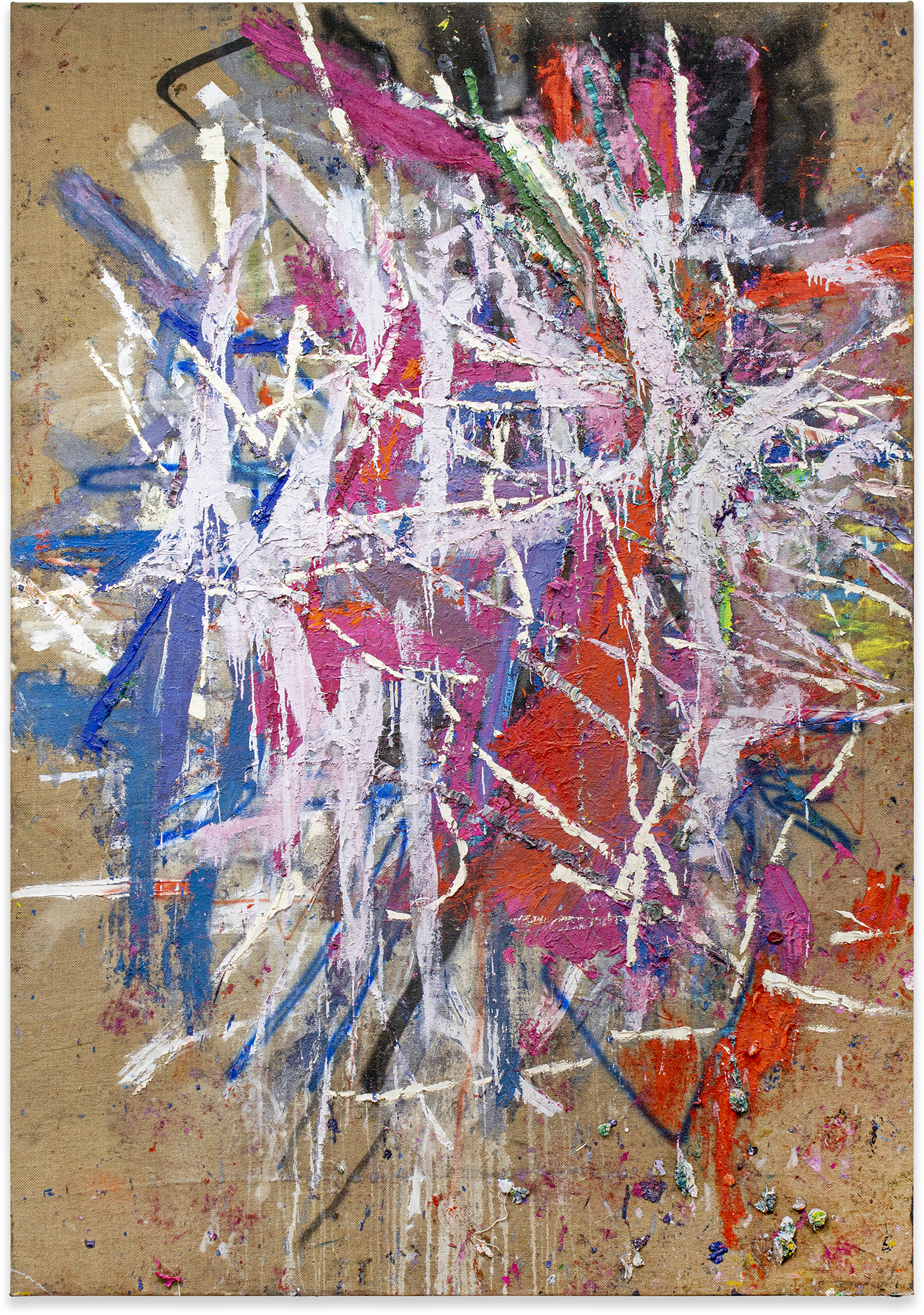 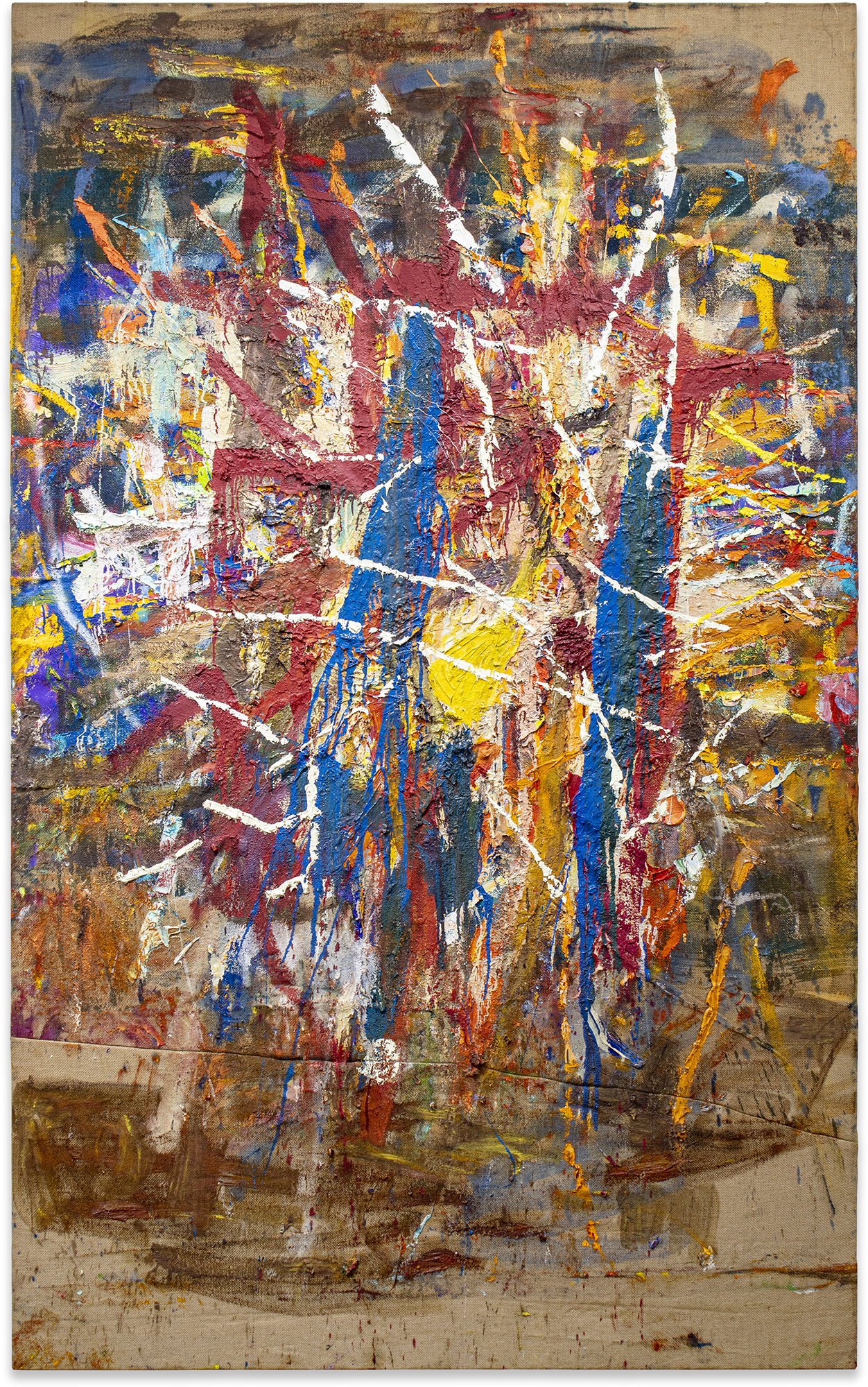 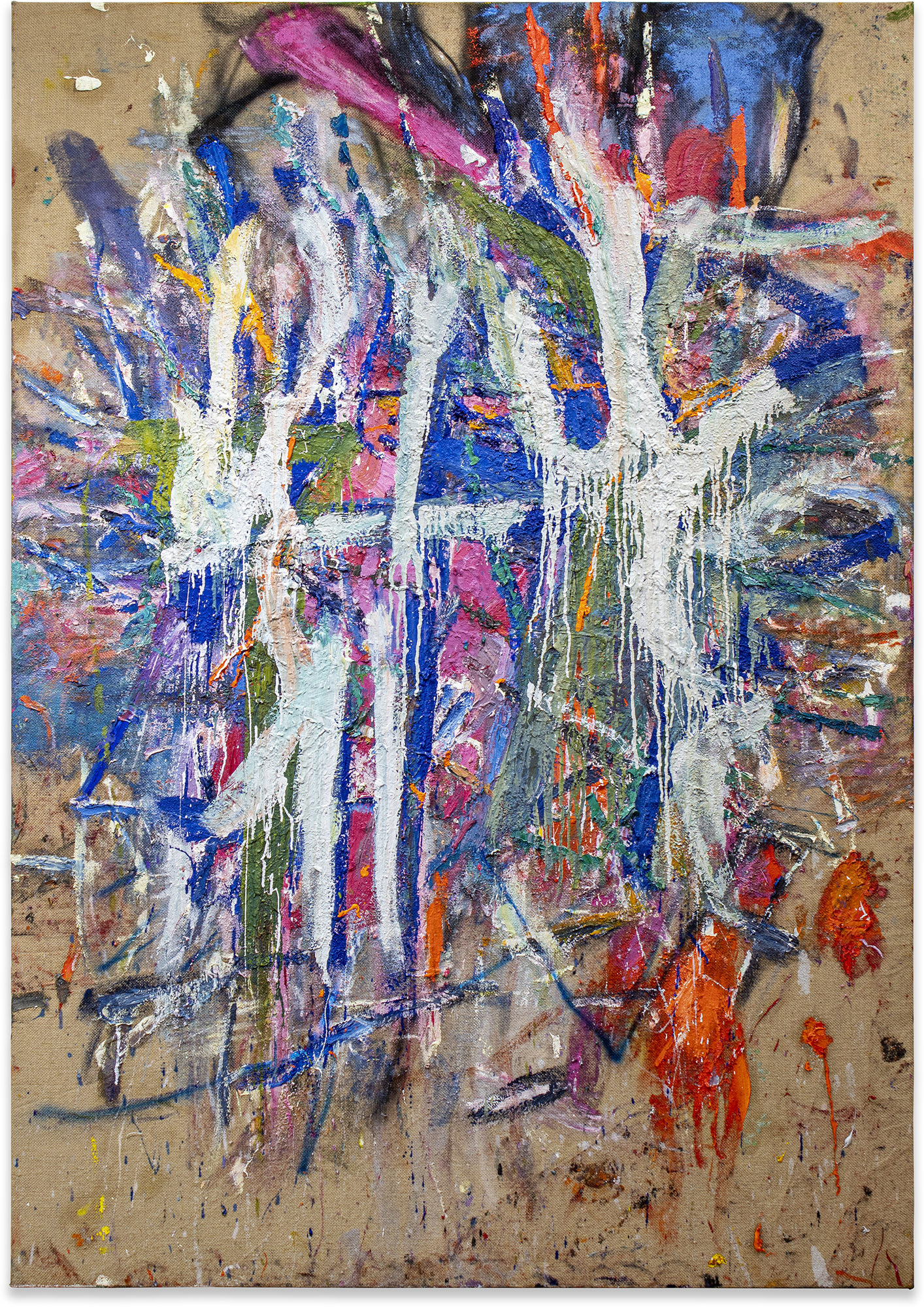 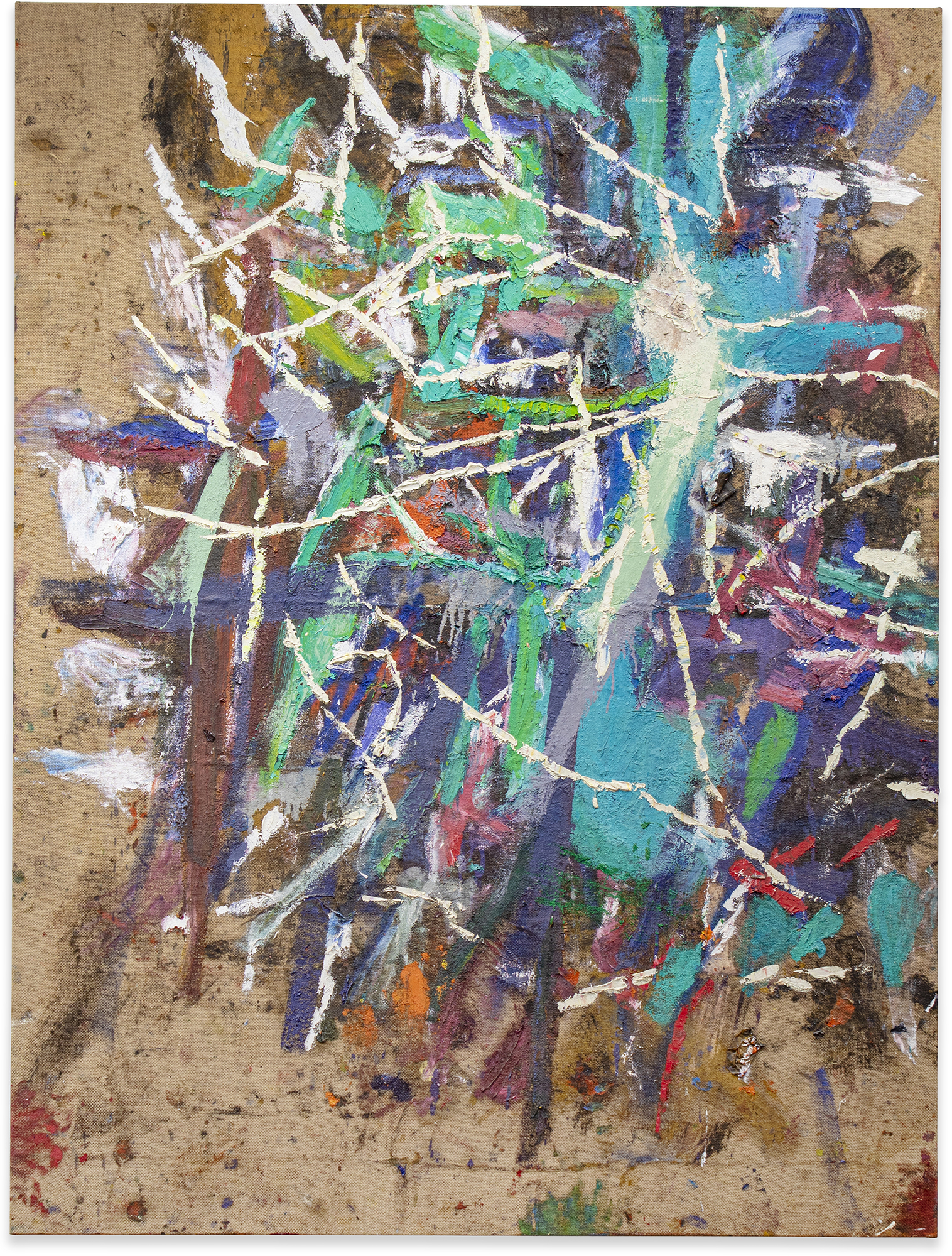 Harper’s is pleased to announce Six Jutes, a two-part solo exhibition by Spencer Lewis. Eleven new paintings on jute will be presented in two combinations of six, with one painting anchoring both immersive installations. Six Jutes is Lewis’s fourth solo exhibition with the gallery and will inaugurate Harper’s Chelsea at 534 West 22nd Street. The gallery is open to the public Tuesday through Saturday, 10am to 6pm; no appointment necessary.

Lewis’s raw jute canvases, dressed in thick layers of oil and acrylic pigments, are characterized by their bold, gestural marks that welt across the surface. Sweeping lines accumulate over softer underpaintings applied with dry brushed washes and spray cans, chaotically intersecting one another as they traverse the picture plane. Deliberately exposing the brown jute canvas in contrast with the vibrant pigments, Lewis embeds each painting literally and figuratively with pieces of his life: screws, brushes, and other odd detritus from the studio can be found peppered throughout the surfaces of the works, revealing a vulnerability distilled from loss and learning. Towering well above human scale, these paintings engulf the gallery walls and invoke a provocative and visceral experience that is invariably tied to the artist’s psyche.

Nearly a decade ago, while dealing with a personal hardship, Lewis began working on cardboard as a means to displace the preciousness of painting and to liberate his emotive impulses, which included physically assaulting his paintings with rocks. Painting on cardboard, and eventually jute, became a form of catharsis, because, as Lewis put it, “nothing mattered and so anything was possible.” Lewis’s painting lexicon has expanded in response to the new “neutral” he found on the surfaces of the jute canvases that have since become an indelible part of his practice.

With a dedication to painting spanning his adult life, Lewis is fluent in the varied temperaments of oil and acrylic media, which he manipulates to yield dripping strokes, sumptuous piles of marbled colors, and macabre crusts. Each finished work—which he considers to be a singular gesture—foregrounds the act of painting itself. However, Lewis’s performance is an orchestration, a constant oscillation between observation and mark making.

Spencer Lewis (b. 1979) received his BFA from Rhode Island School of Design in 2001, and his MFA from the University of California, Los Angeles, in 2008. His work has been the subject of numerous solo exhibitions, including Harper’s, New York City and East Hampton (2020, 2019, and 2017); Sorry We’re Closed, Brussels (forthcoming, 2021); Nino Mier, Los Angeles (2016); and Edward Cella, Los Angeles (2014). His paintings have also been included in recent group shows at No Gallery, Los Angeles; LTD, Los Angeles; Lowell Ryan Projects, Los Angeles; Harper’s, East Hampton; and Brennan and Griffin, New York; among others. Lewis currently lives and works in Los Angeles.