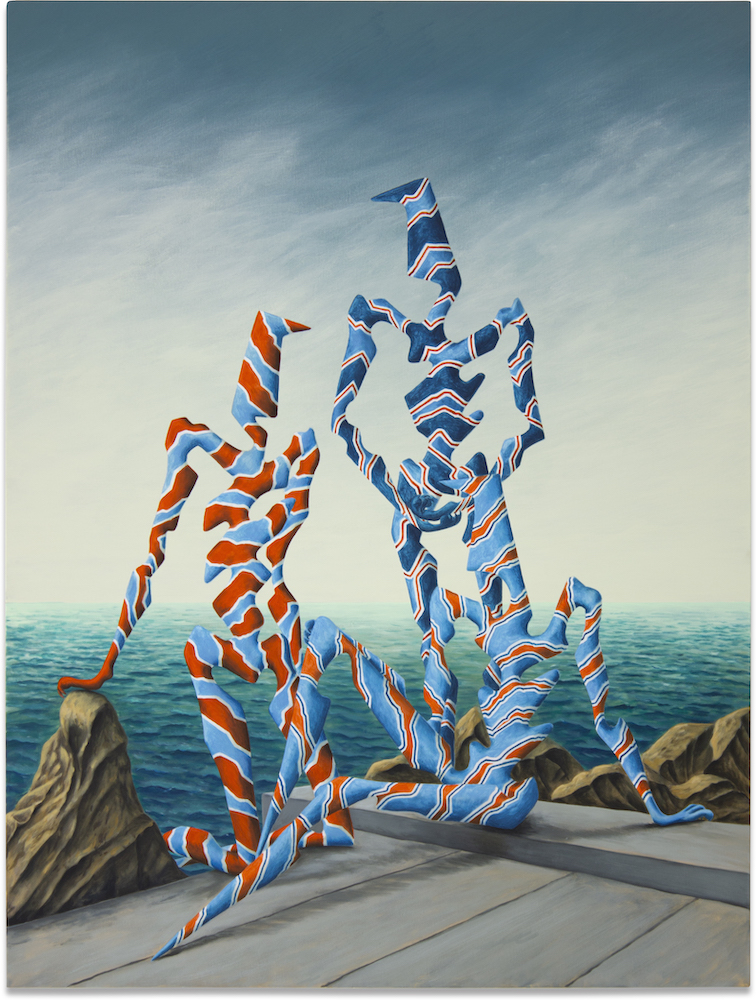 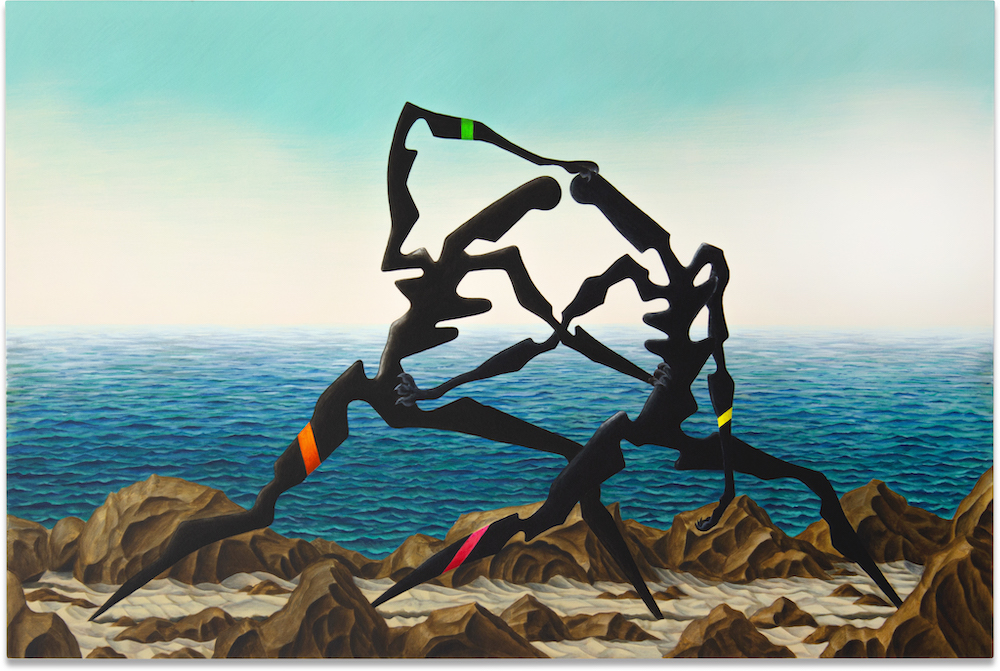 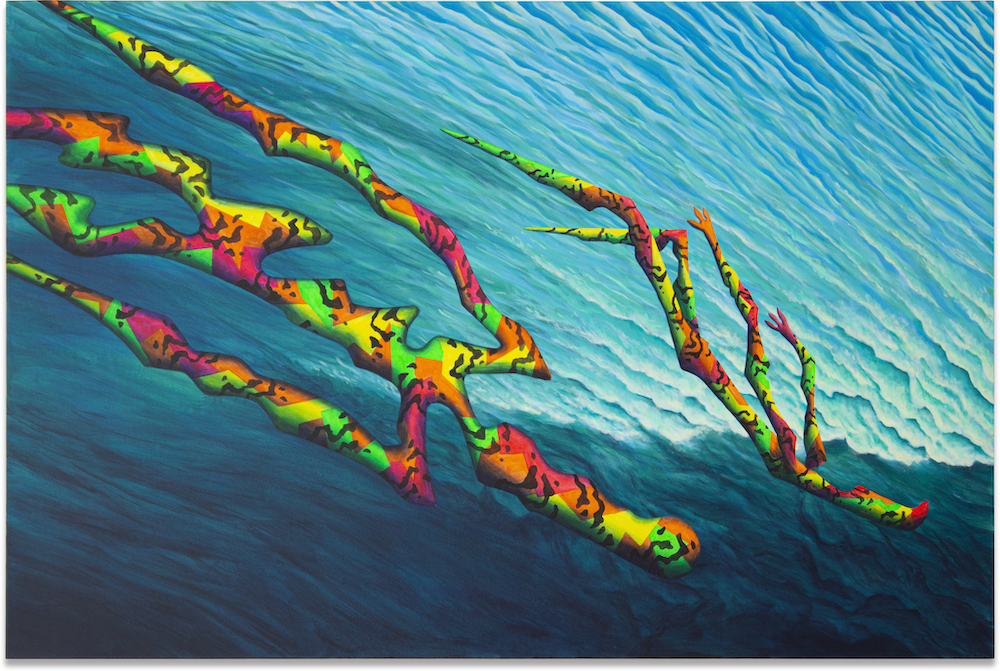 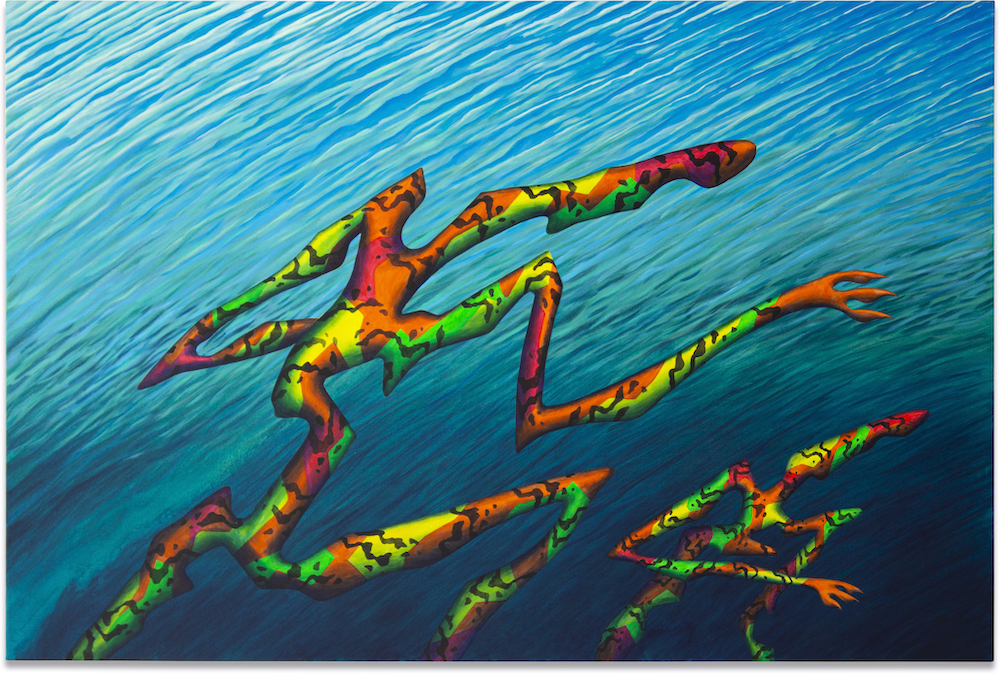 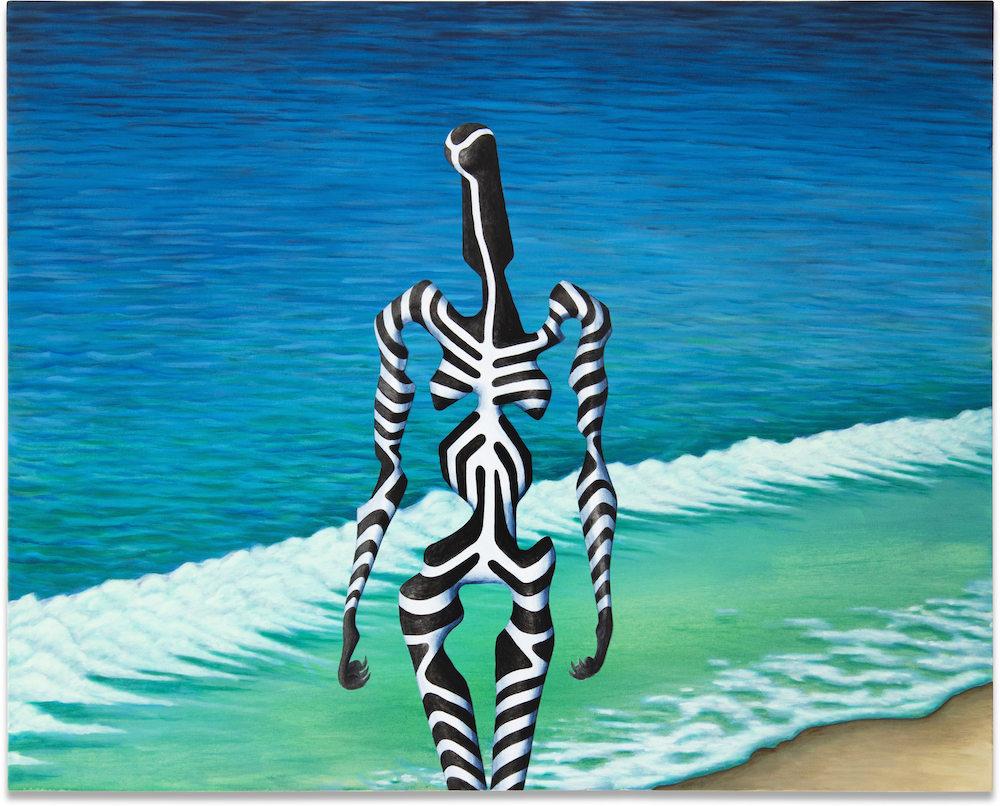 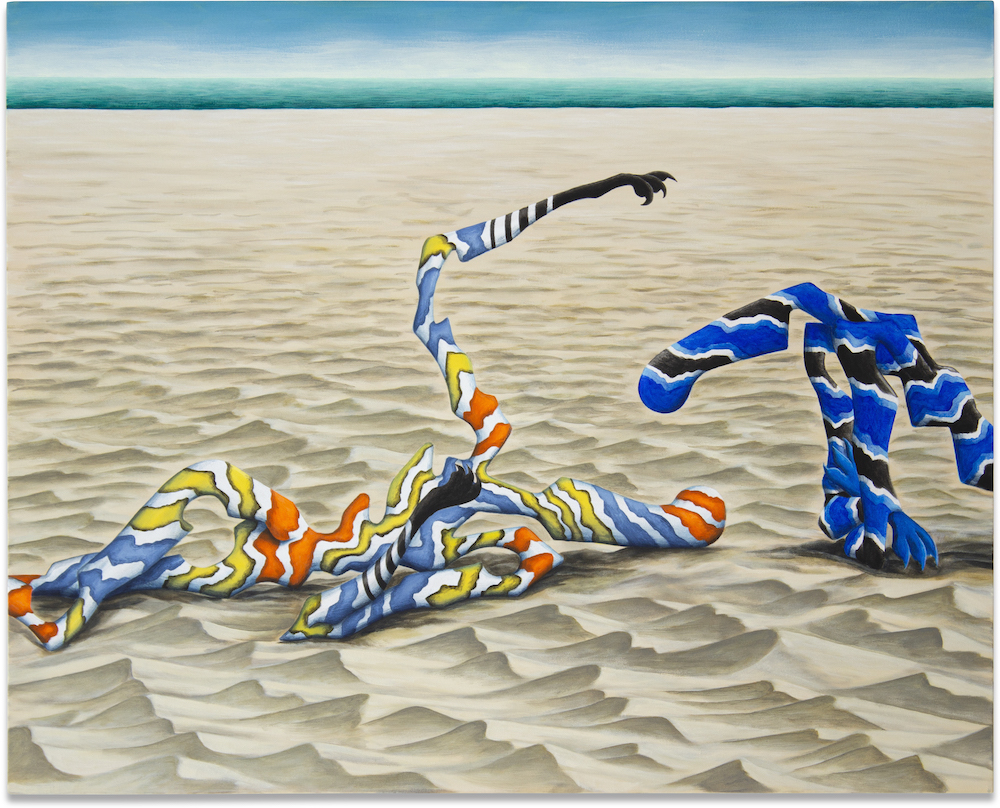 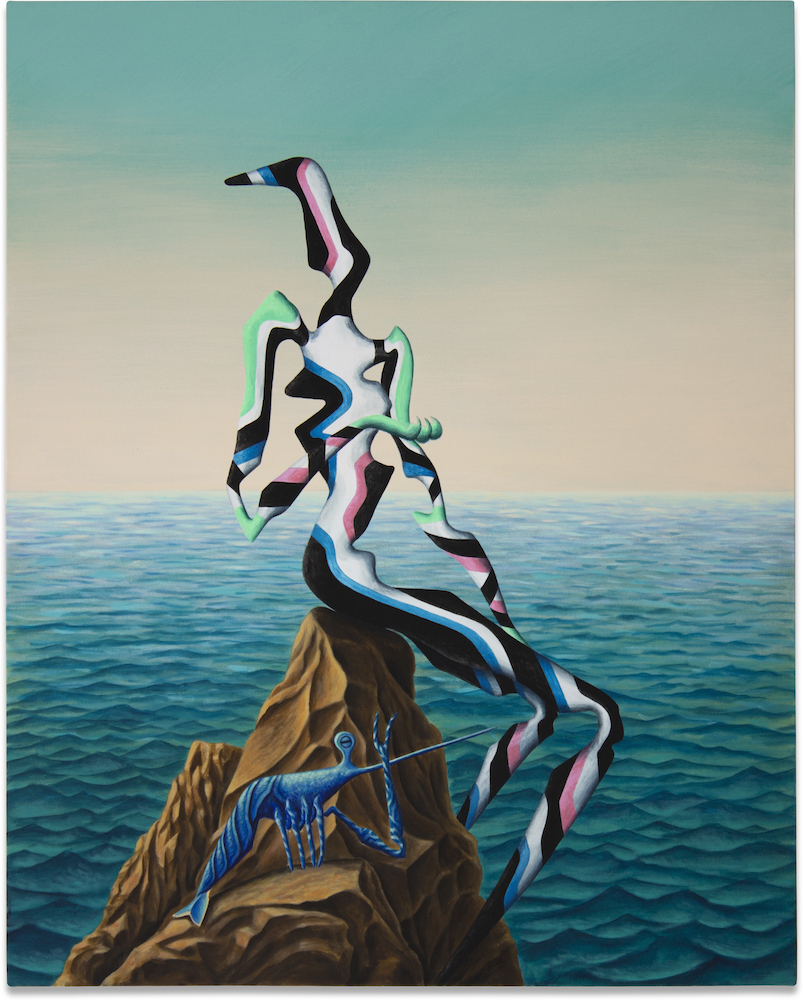 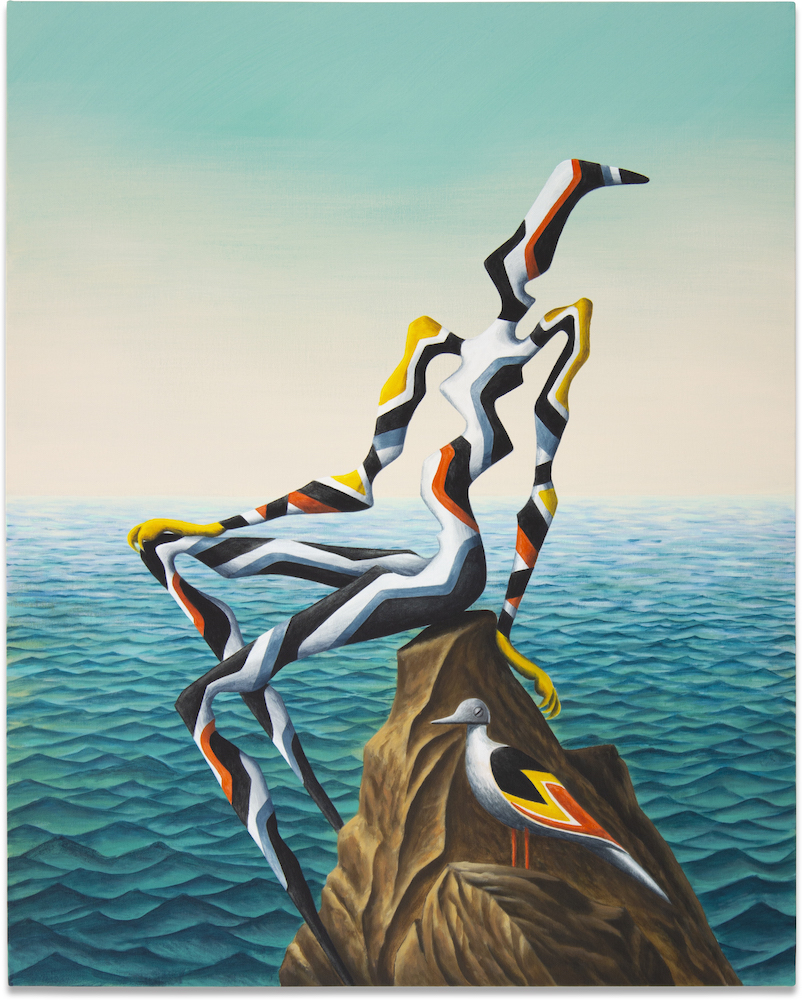 Harper’s is pleased to present AEAEA, an exhibition of eight paintings by the Los Angeles–based artist Alejandro Cardenas. Building on a prolific background as an illustrator and fashion designer, Cardenas has developed a unique aesthetic in recent years, grounded in abstract figuration and informed by a variety of formal and literary influences. AEAEA will open on Saturday, August 15 and will remain on view through September 17, 2020. Harper’s is open from 10am to 6pm daily; no appointment is necessary to visit the gallery.

In his lyrically surreal canvases, Cardenas renders domestic and natural environments with meticulous precision, deftly reimagining sterile interiors and abandoned expanses evocative of a gradually unraveling world. Woven into his eclectic scenes are faceless humanoid figures in expressive poses, their undulating, puttylike contours wrapped in pulsating bands of color. Prowling, lounging, and cascading across his compositions, Cardenas’s lithe, shadowy subjects wind through their surroundings, yielding a beguiling contrast with the real-world settings they inhabit.

Inspired by the seascapes of the Hamptons, Greek mythology, and the Covid-19 pandemic, the enigmatic paintings in AEAEA amplify the dreamlike quality of Cardenas’s distinctive style, conveying themes of isolation and the ascendance of nature through the lens of Madeline Miller’s 2018 novel Circe. A first-person retelling of the mythological sorceress’s life story, Miller’s narrative chronicles Circe’s banishment to the solitary island of Aeaea, where she attentively hones her powers for transformation, and underscores the intensifying friction between the gods and humankind amid the deities’ waning dominion. In Cardenas’s paintings, alternatively pensive and animated lone figures perch atop craggy waterfront cliffs reminiscent of Aeaea’s topography, surrounded by the sea’s gradually receding, seemingly infinite waves, inviting comparison to the contemporary experience of quarantine.

Drawing upon Circe’s central premise, AEAEA highlights the fraught relationship between humans and the natural world—between what can and cannot be controlled—forming a generative allegory for our increasingly visible entanglement with external forces in the age of the novel coronavirus. Waves tower above luminous Day-Glo-hued figures in Descending Senses, while drifting dune peaks surround the sprawling subjects in A Current Affair, suggestive of our shared capitulation to nature’s whims. Resonating with the isolating circumstances of the recent lockdown, Cardenas’s paintings capture a world in transition, teetering on the brink of uncertainty.

Alejandro Cardenas (b. 1977, Santiago, Chile) completed his BFA at the Cooper Union School of Art in 2000. He has exhibited his work in group and solo shows at Anat Ebgi (2019), the Hammer Museum (2003), and Marc Foxx (2002) in Los Angeles; in New York, he has shown at Harper’s Apartment (2019), James Fuentes (2008 and 2010), Daniel Reich Gallery (2005), and Rivington Arms (2003). Before becoming a full-time studio painter, Cardenas had a successful career as a multimedia artist, working in illustration, graphic design, and videography. For over a decade, he served as the lead textile designer and art director for the influential fashion label Proenza Schouler. He was also a founding member of Lansing-Dreiden, a New York–based transdisciplinary art collective that produced musical albums, a literary journal, and artworks. Reviews of his art and design projects have appeared in the New York Times, Vogue, and Another Magazine. Cardenas currently lives and works in Los Angeles.