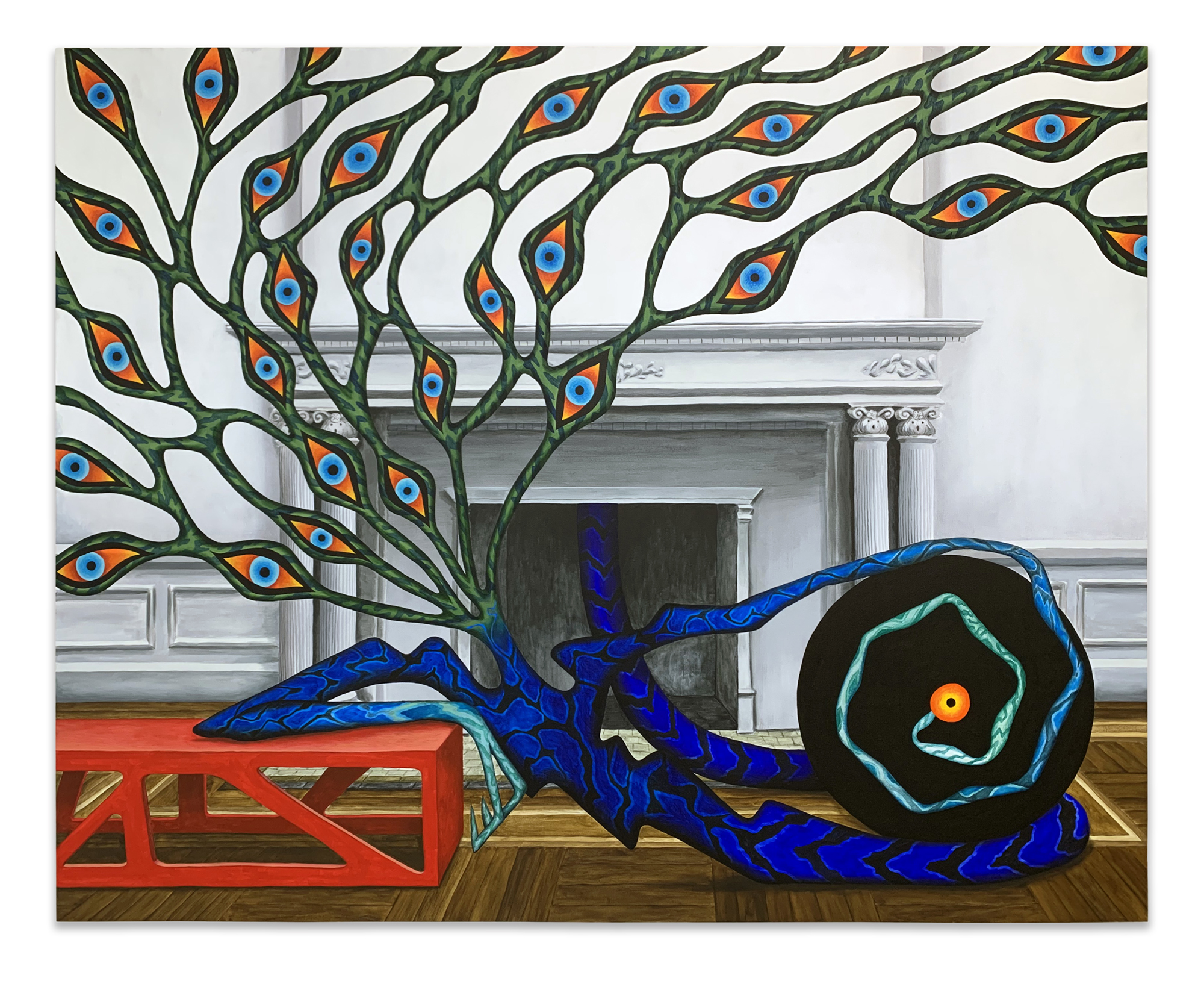 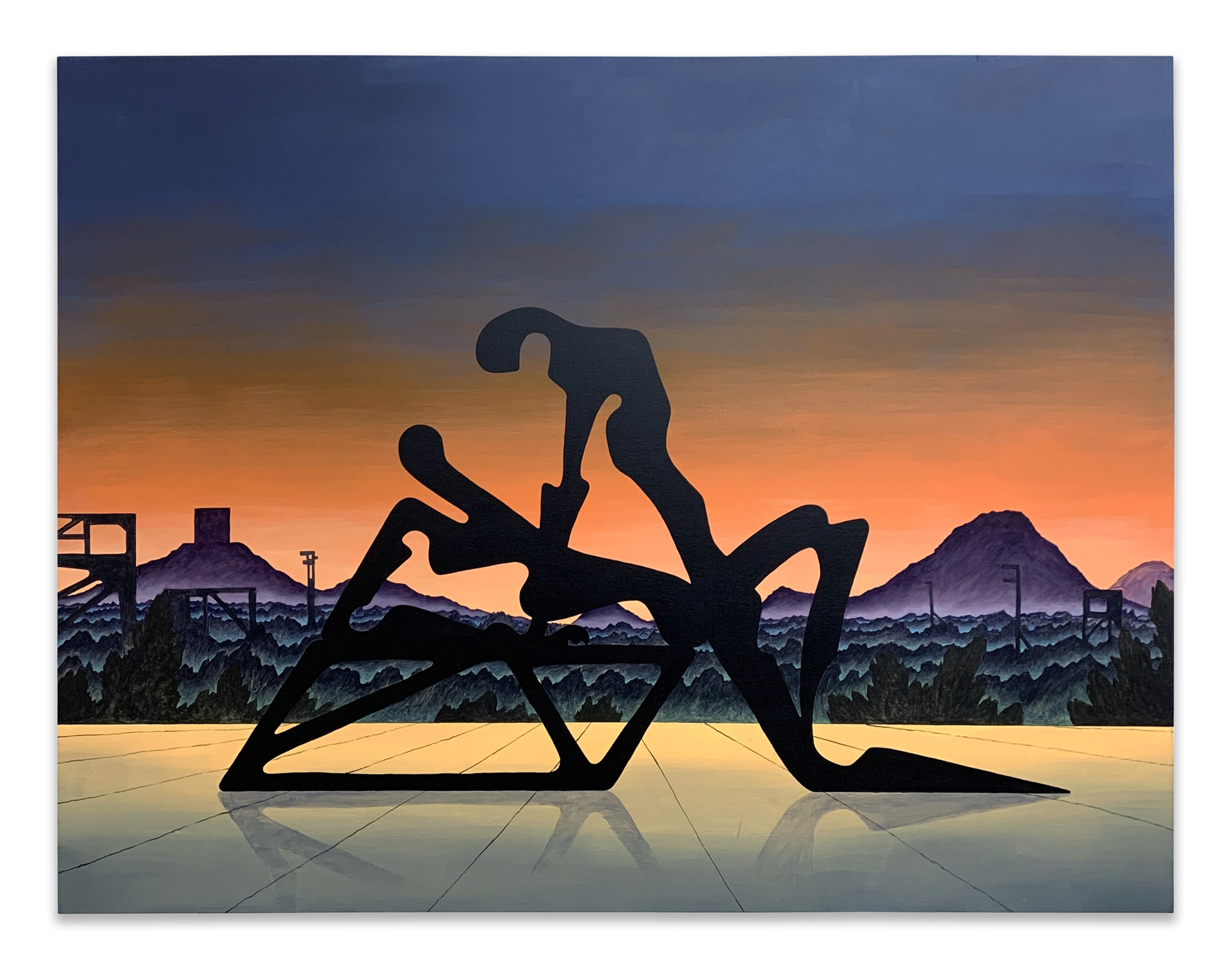 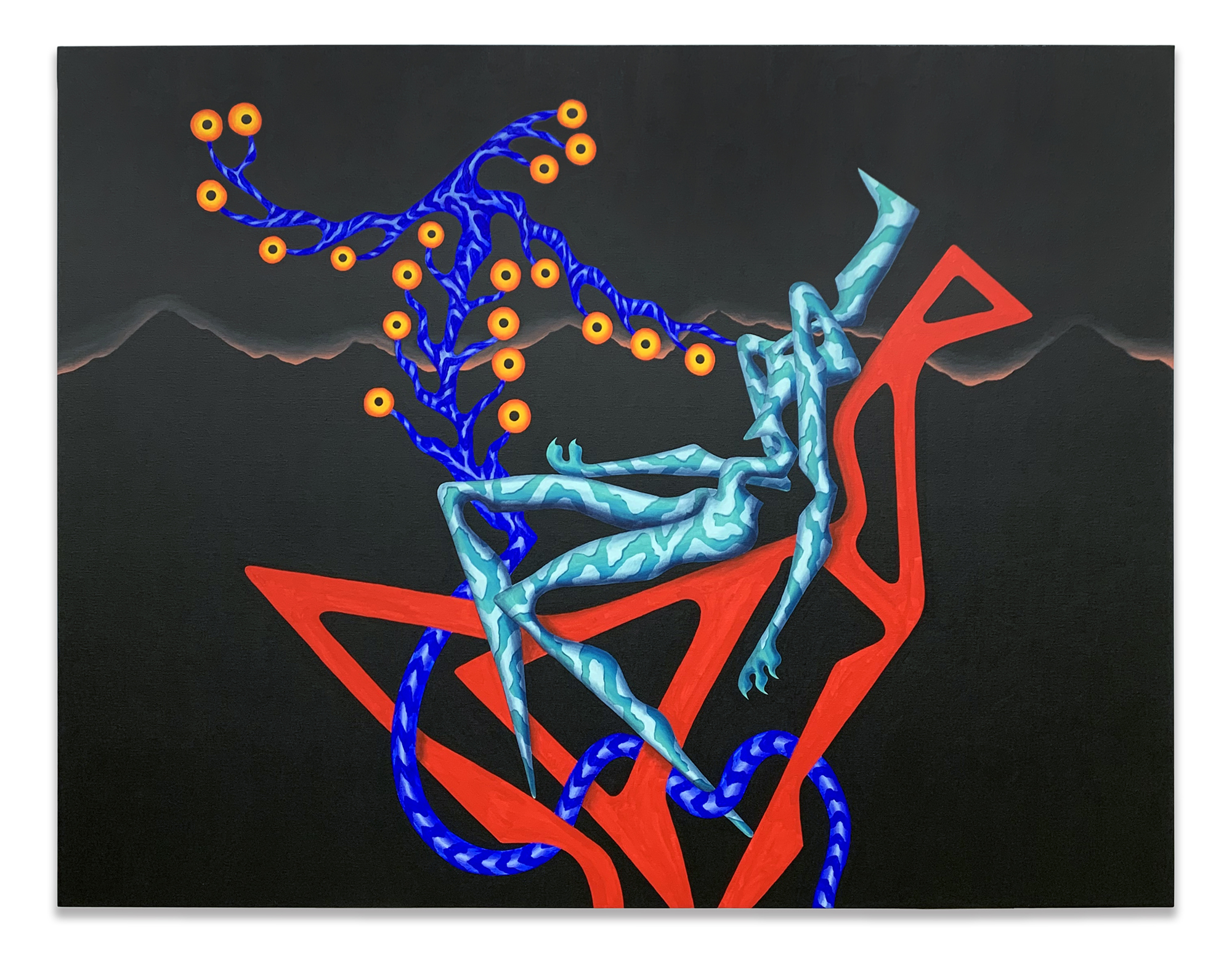 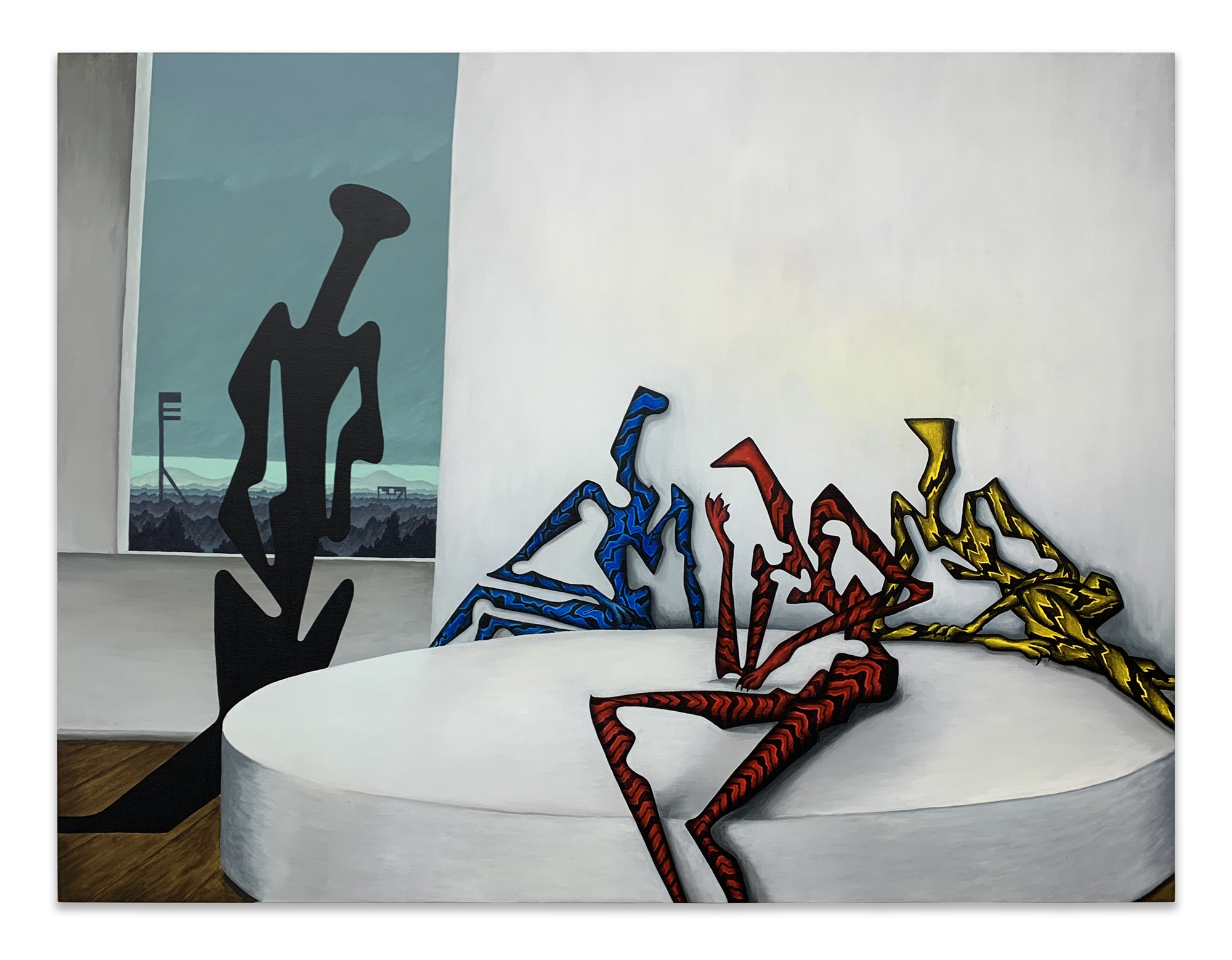 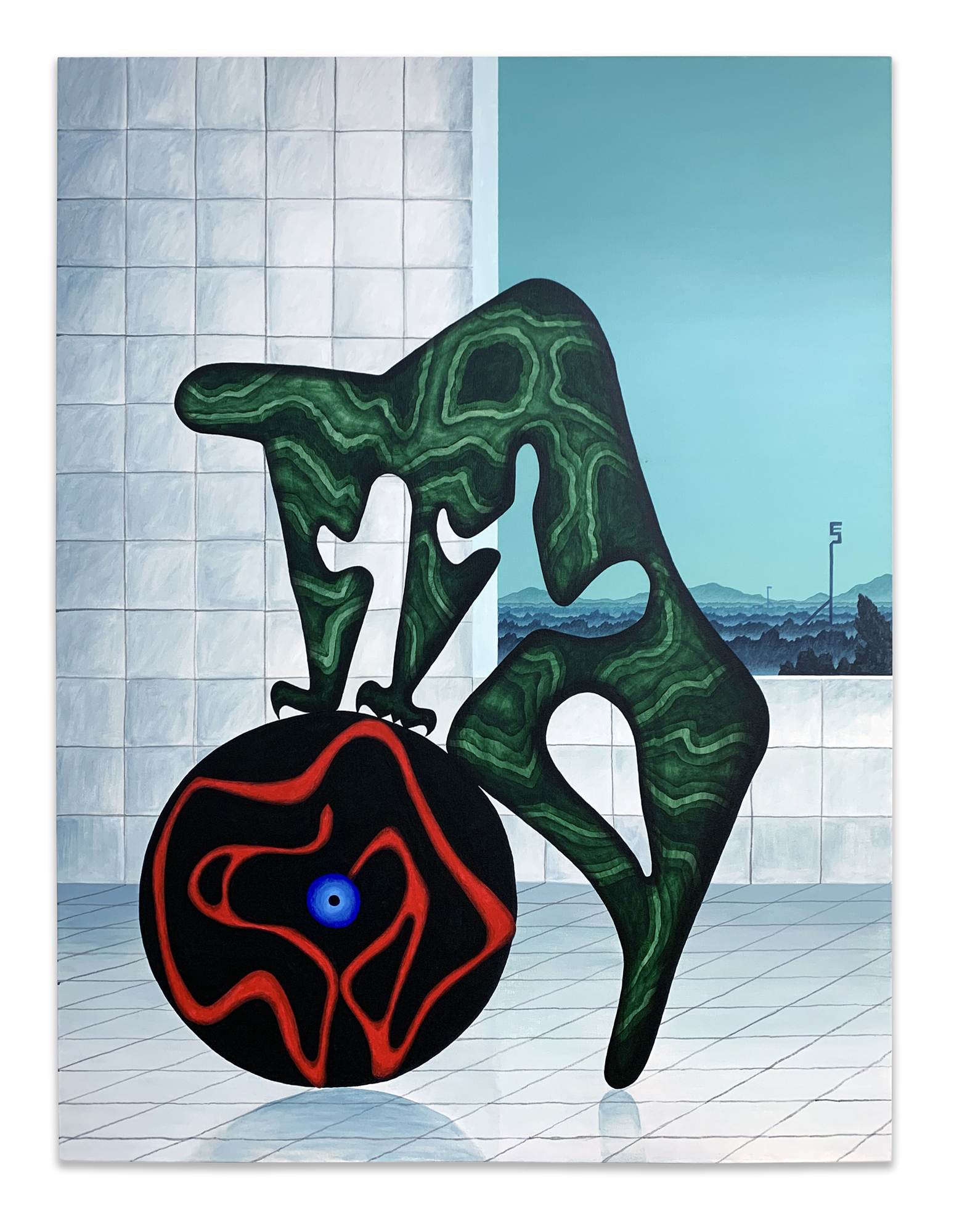 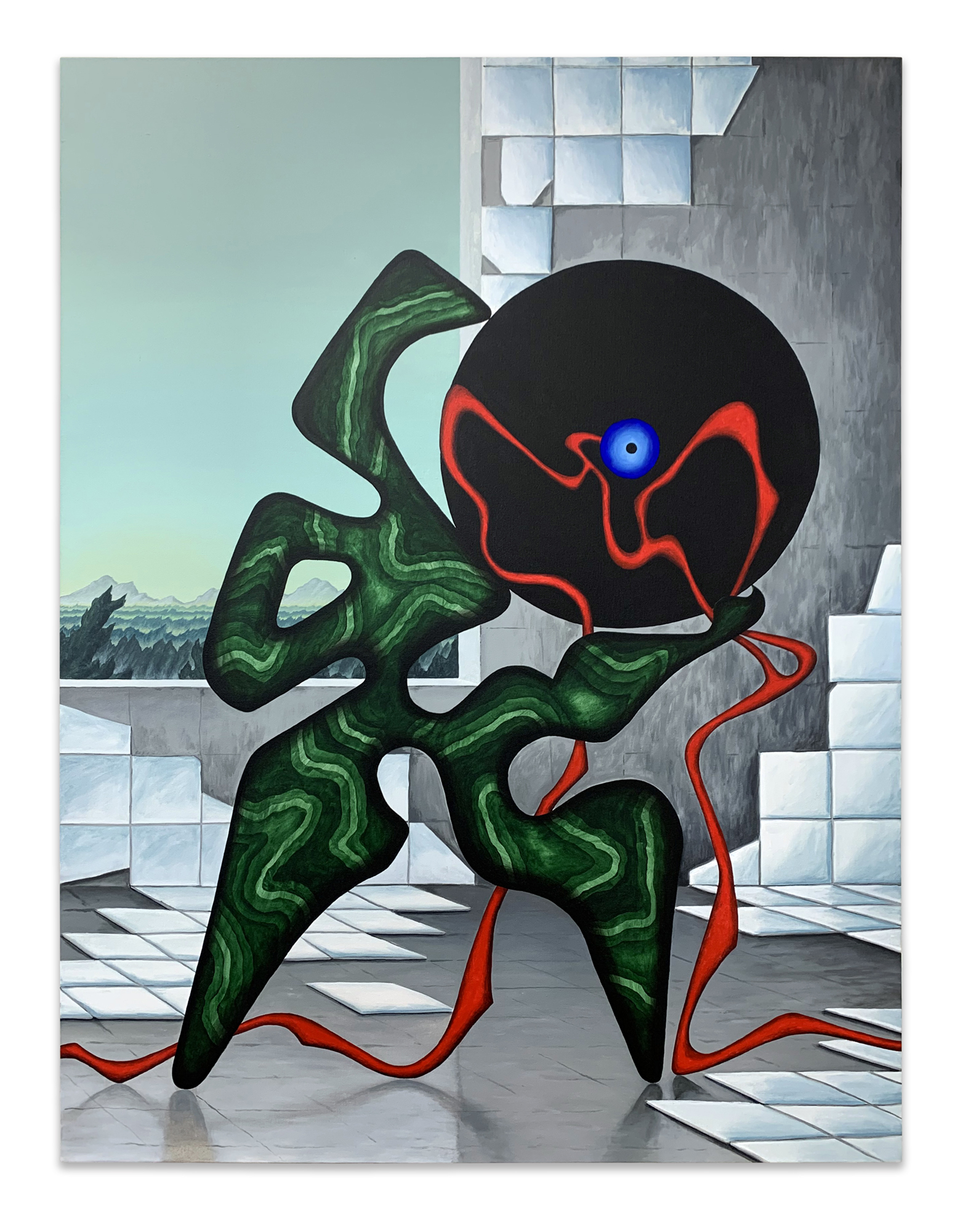 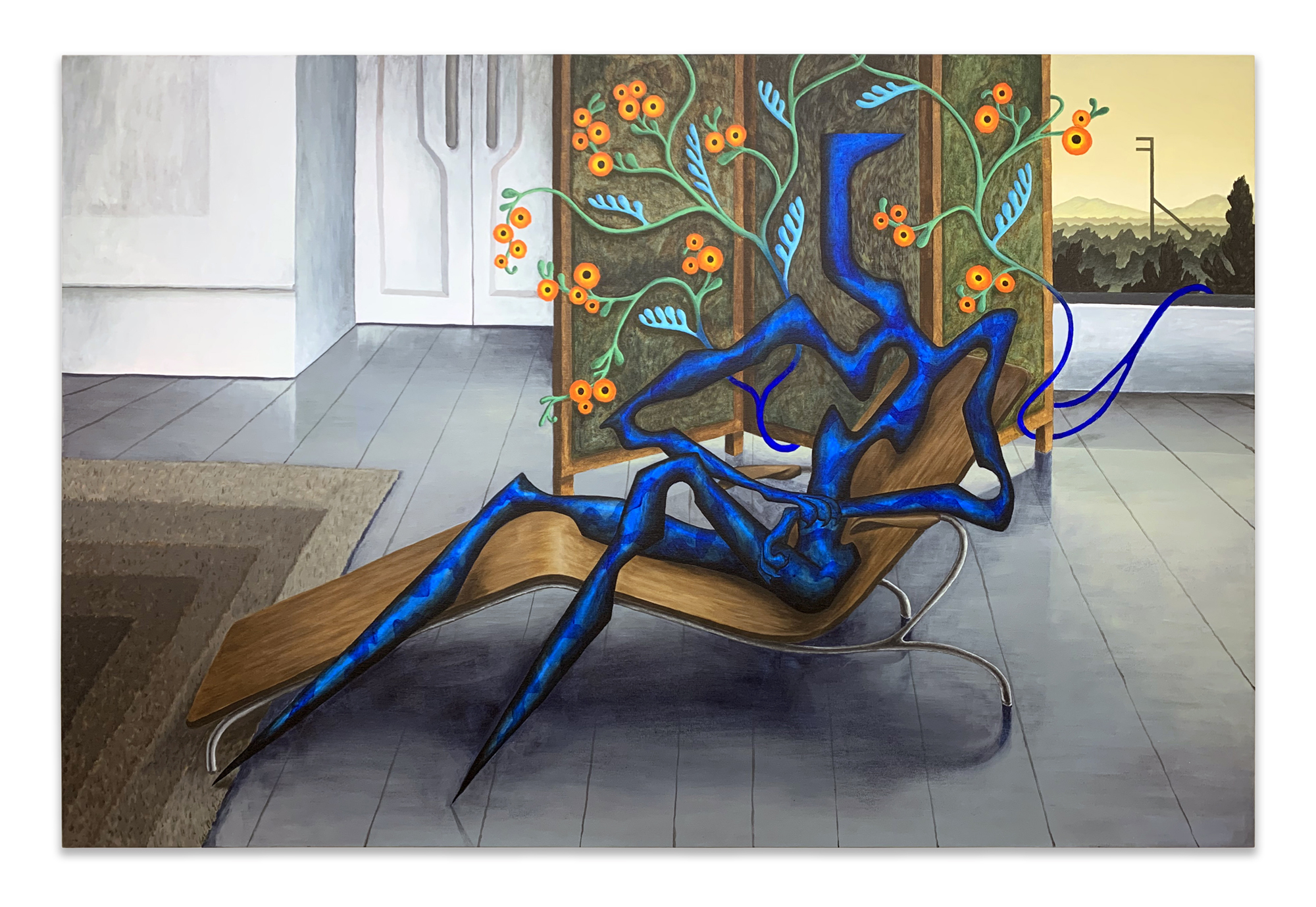 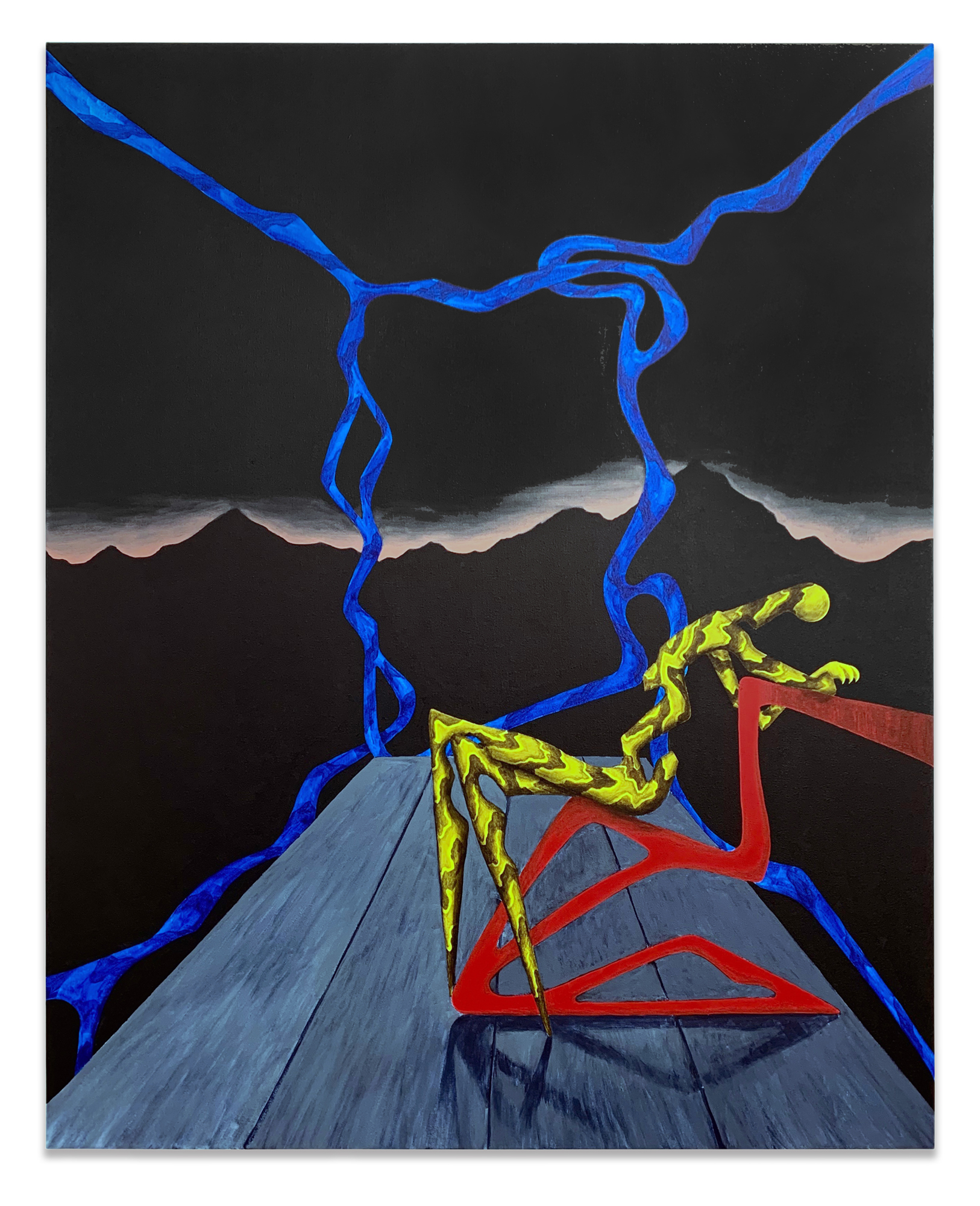 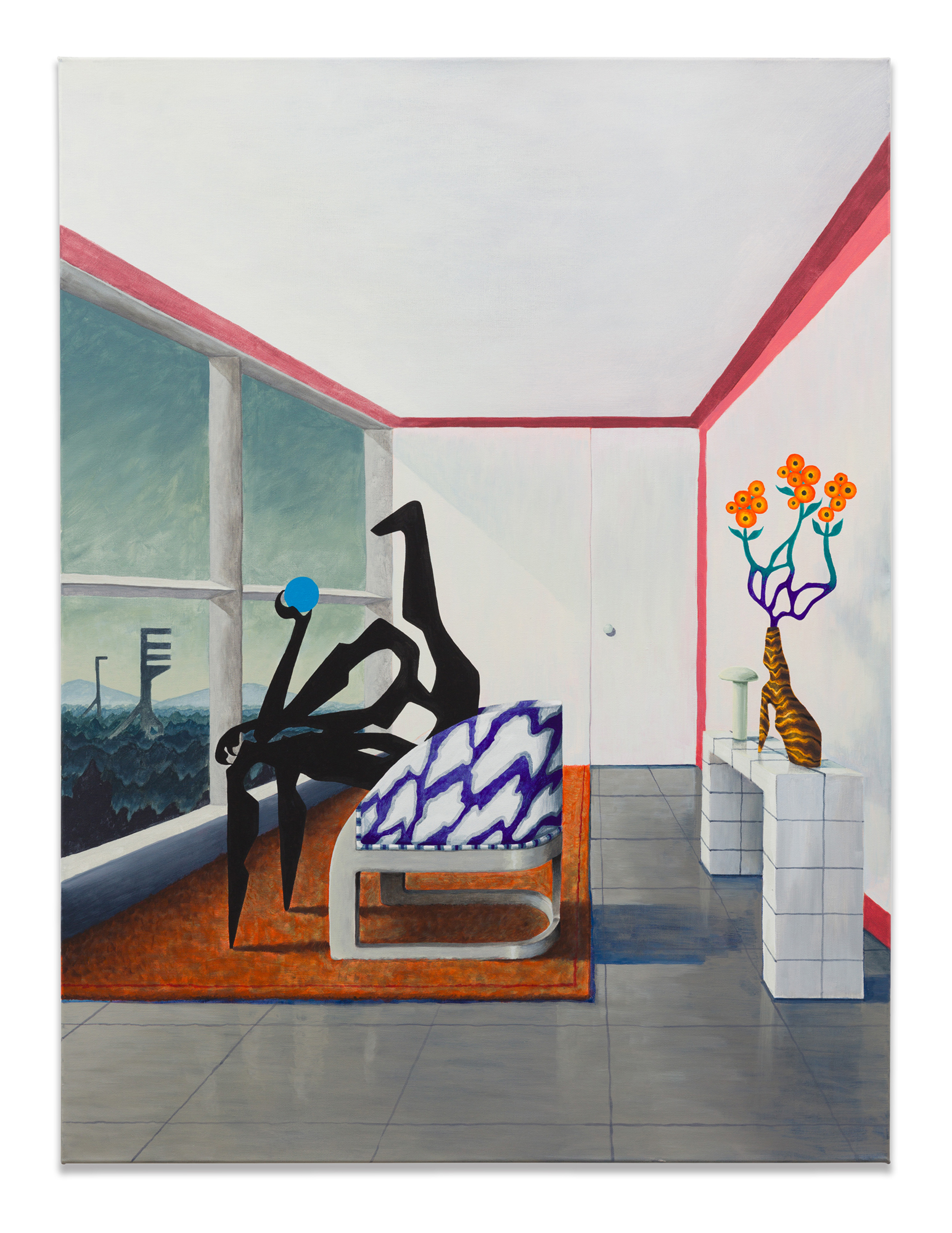 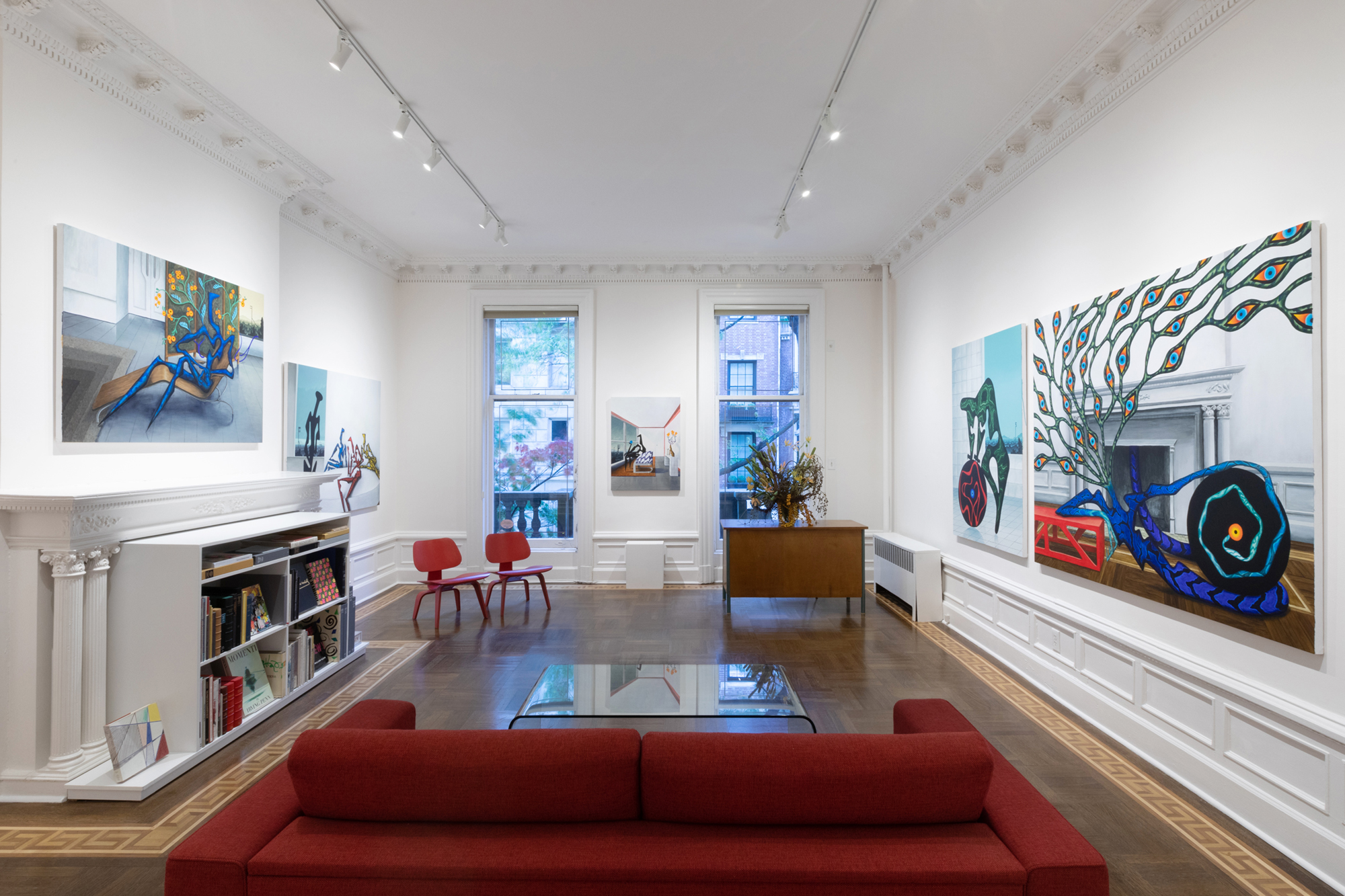 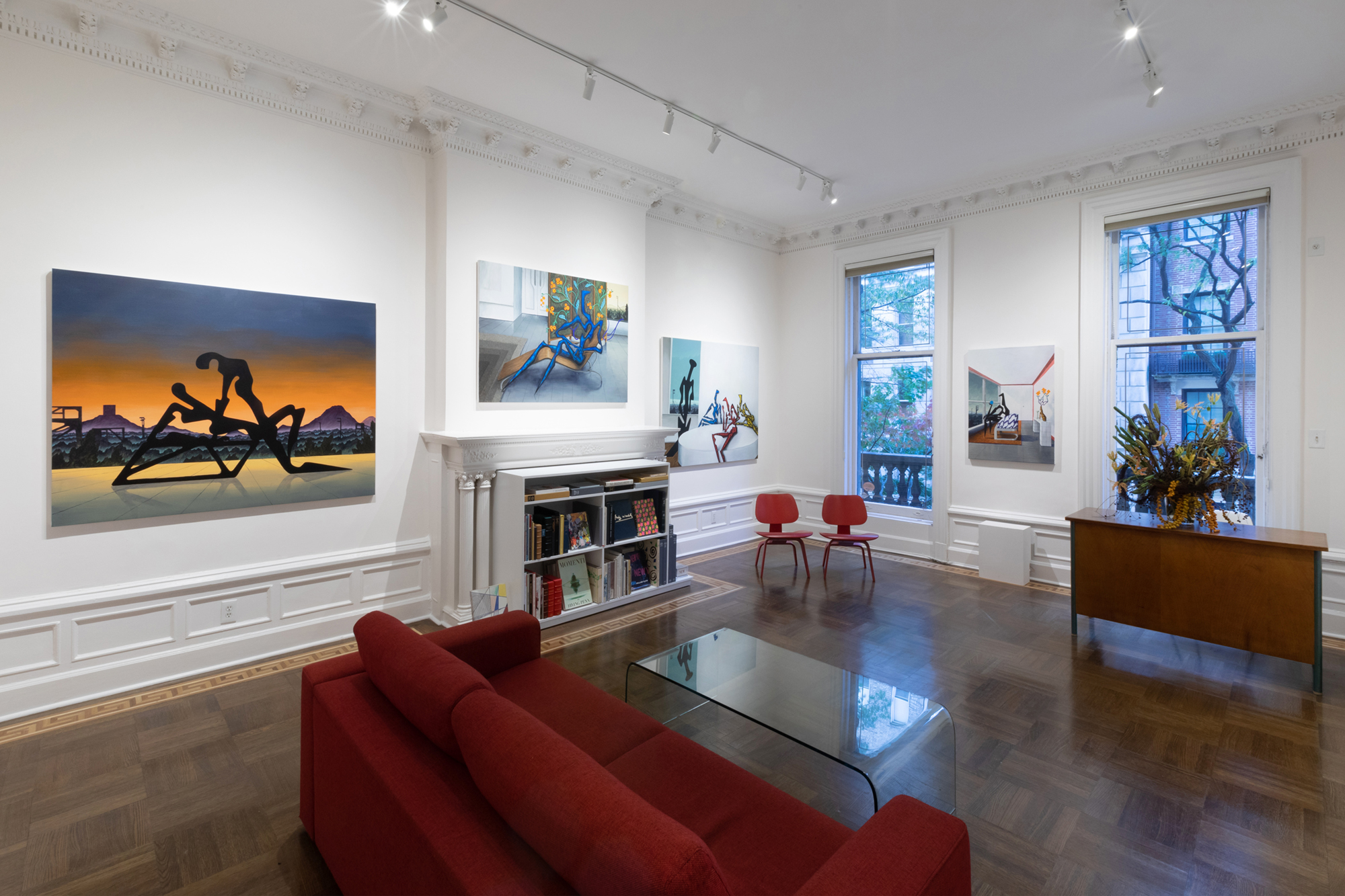 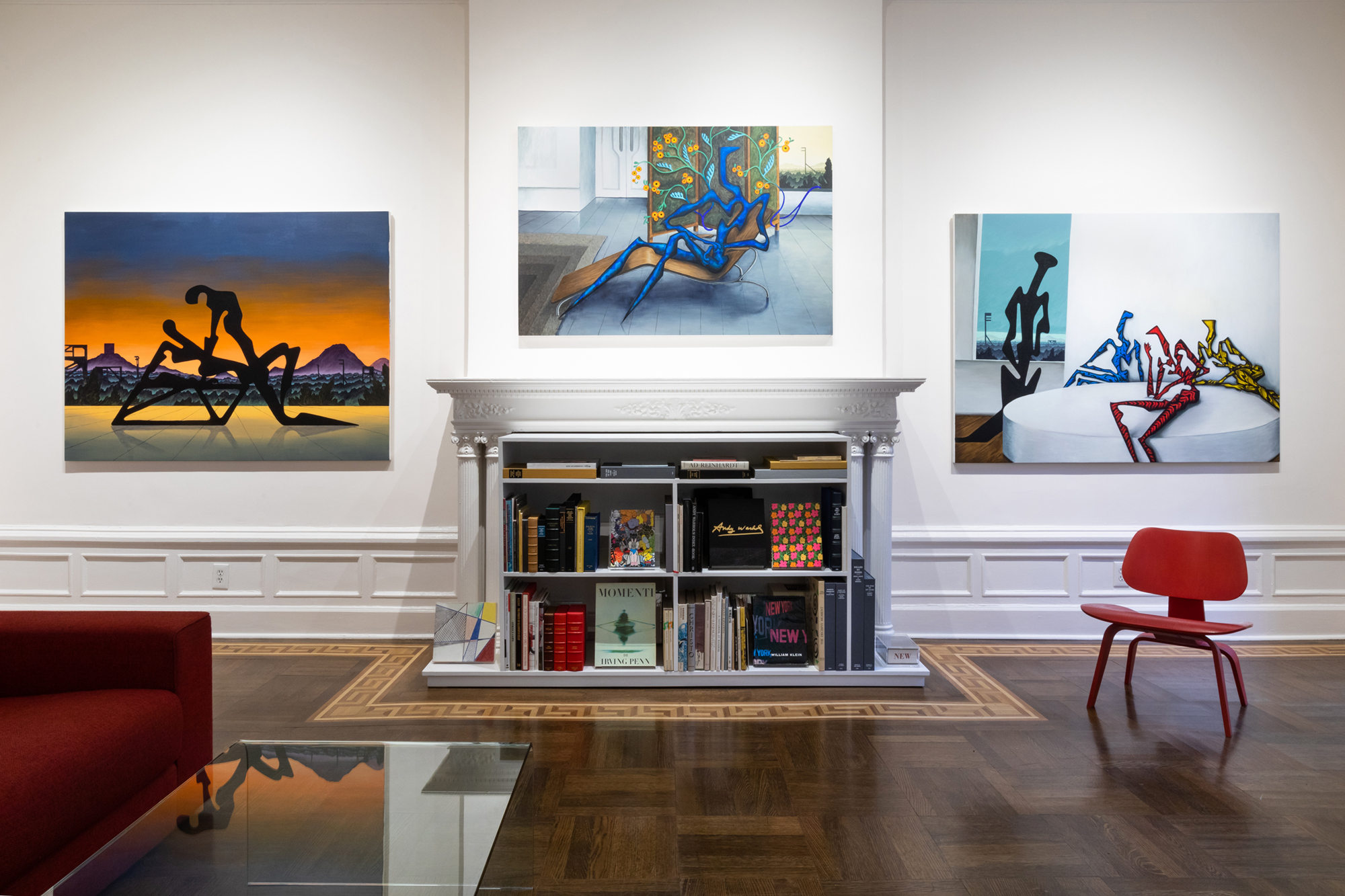 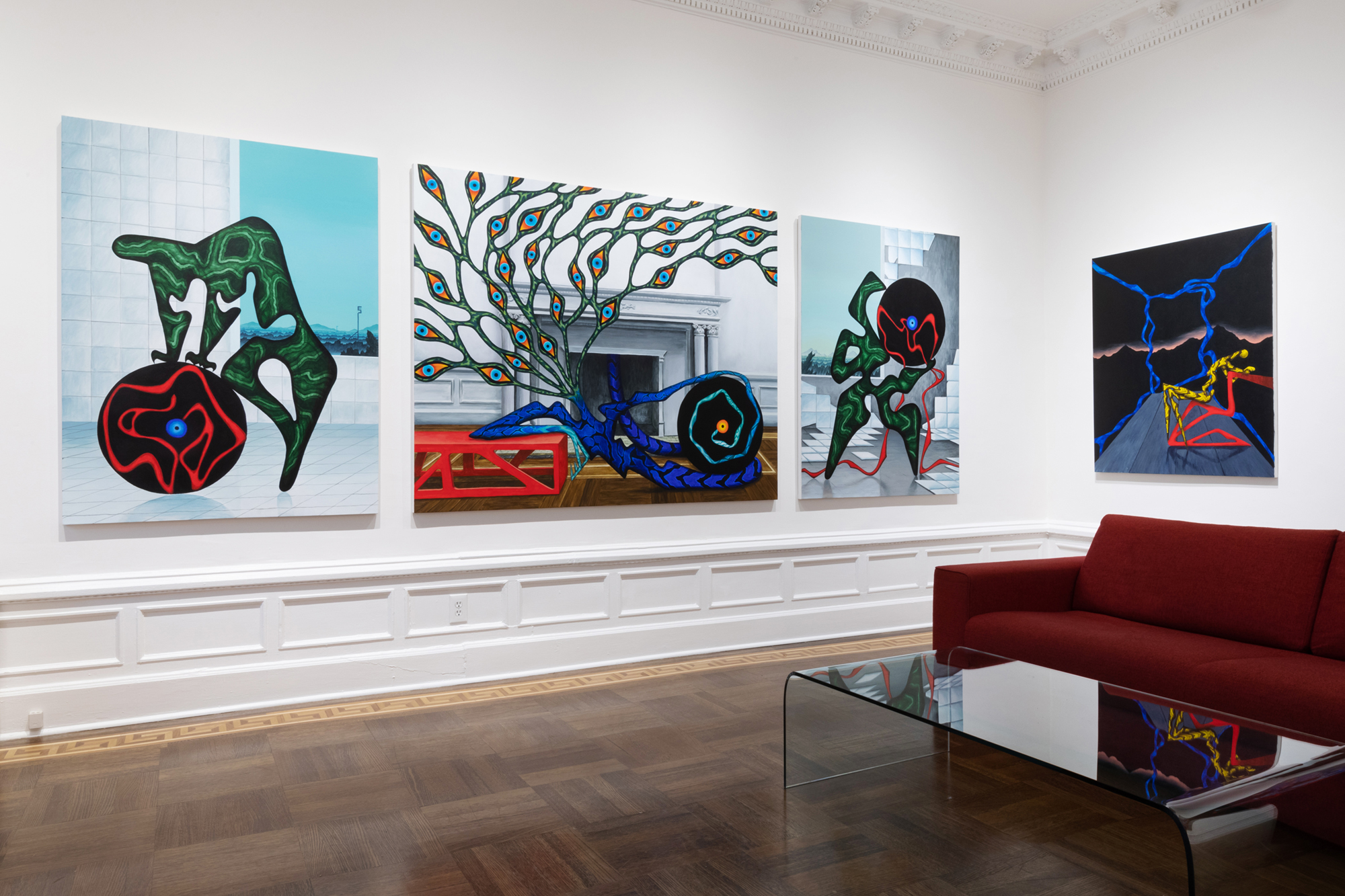 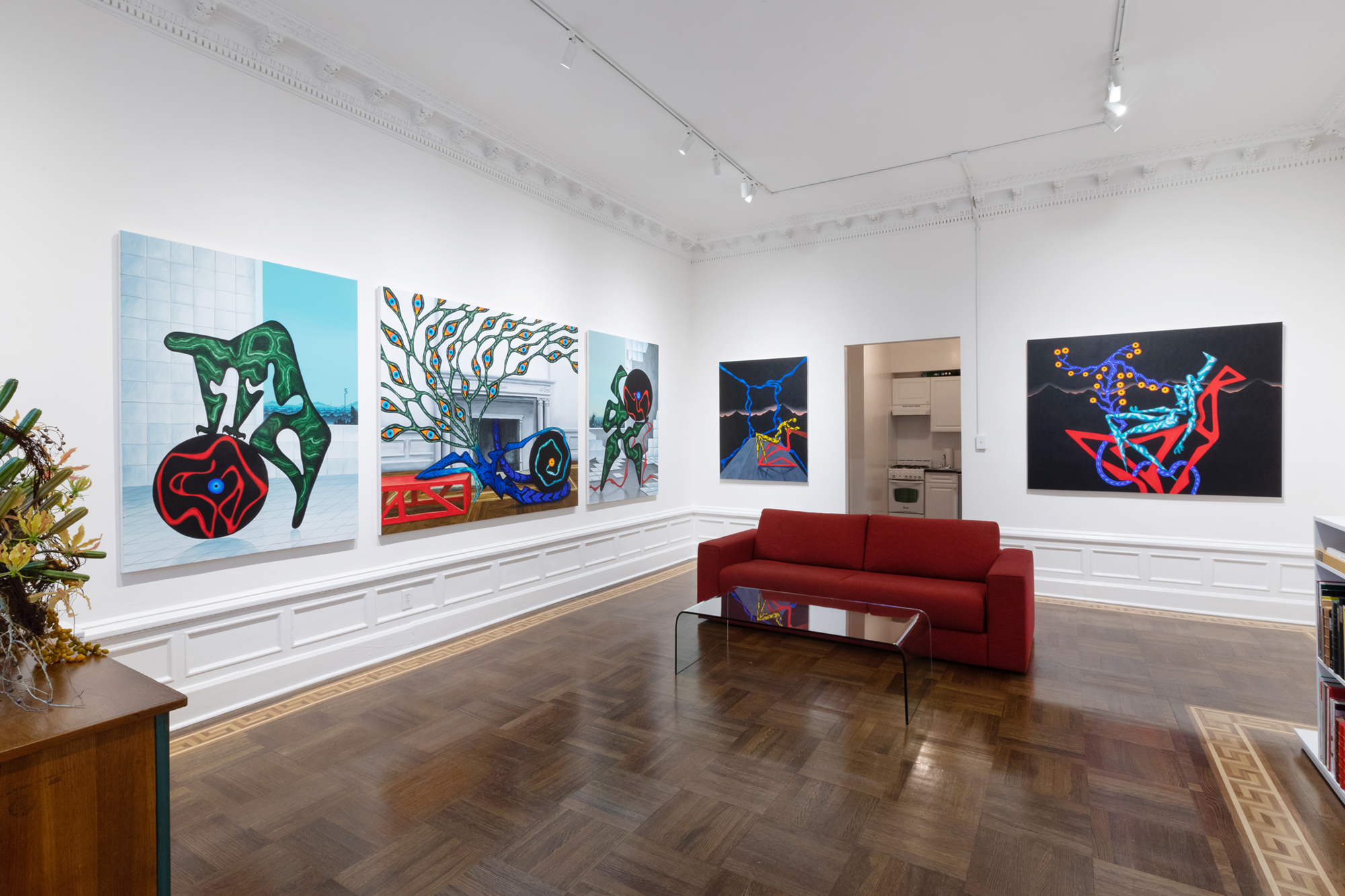 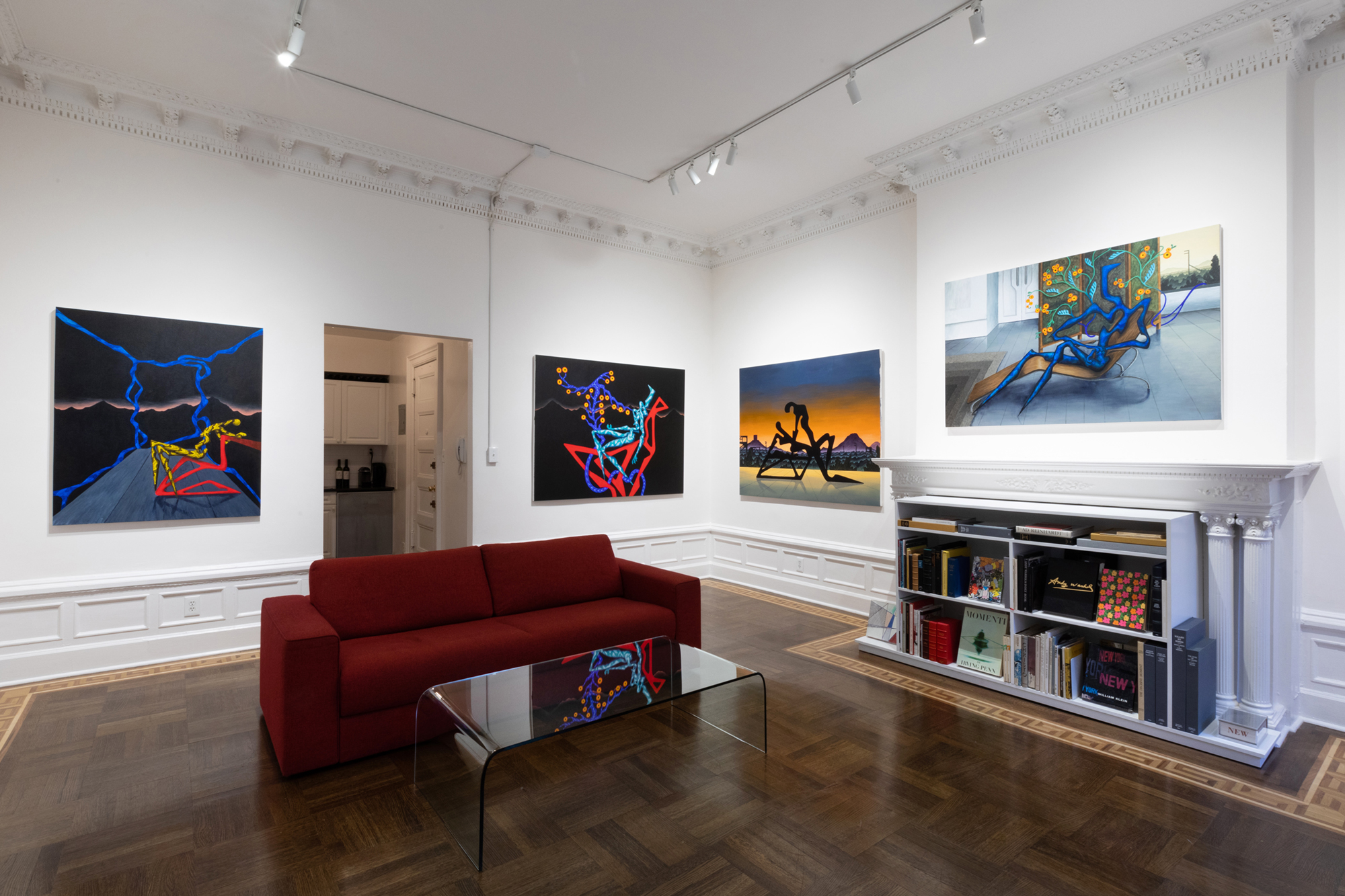 Harper’s Books is pleased to announce ANTARCTICA, Alejandro Cardenas's first exhibition in New York City since 2010. Best known for crisp illustrations, drawings on paper, and multimedia design projects, Cardenas only began painting on canvas in February of this year. Despite this recent engagement with the medium, his detailed paint application and subtle color gradients evince an intuitive grasp of its techniques. Keeping the gallery space in mind, Cardenas made this series in response to the particular architectural elements of Harper's Apartment, with one piece featuring a rendering of the fireplace. The exhibition will open with a reception, attended by the artist, on Wednesday, October 30, from 6 to 8pm, and will close December 7, 2019.

The nine paintings in ANTARCTICA portray surreal scenes of modernist interiors inhabited by otherworldly figures in repose, raising questions about contemporary society's relationship to nature and the possibility of alternate realities. Desolate environments are visible through large windows, exposing dense forests with overcast skies in cool tones. Relics of abandoned minimalist edifices and inactive industrial constructions lie peppered across the landscape, implying inhospitable scenarios of postindustrial ruin. All signs of vitality outside are absent. The most vibrant lifeforms are contained indoors, growing directly out of or around the figures themselves. Composed of elongated torsos and serrated limbs, the faceless portraits lack all sense organs. Nevertheless, they appear to have a deep sensuous connection to their surroundings. Some figures are completely silhouetted while others have marbled bio-luminescent skin. Plant-like structures sprawl out from bodies and at times conjoin with the external environment like umbilical cords. Characters interact with orbs that resemble compressed black holes, gently absorbing the matter around them. It is as if Cardenas's figures have the power to generate organic material, conceivably giving birth to a new world in the context of a decaying one.

Through his adoption of a surrealist ethos inspired by Max Ernst, Roberto Matta, and Yves Tanguy, and with his past experiences as a multimedia artist working in various creative fields, Cardenas has devised a visual language for the 21st century. As complex issues like climate change, geopolitical unrest, and technological development continue to transform life in unexpected ways, the anxiety of an uncertain future permeates present-day cultural expression. Cardenas explores this sensibility by inviting the viewer not only to consider the intimate entwinement of nature and artifice, but also humanity's role in the process.

Alejandro Cardenas (b. 1977, Santiago, Chile) completed his BFA at the Cooper Union School of Art in 2000. He has exhibited in group and solo shows, including Anat Ebgi (2019), the Hammer Museum (2003), and Marc Foxx (2002) in Los Angeles; in New York, he has shown at James Fuentes (2008 and 2010), Daniel Reich Gallery (2005), and Rivington Arms (2003). Before becoming a full-time studio painter, Cardenas had a successful career as a multimedia artist, working in illustration, graphic design, and videography. For over a decade, he served as the lead textile designer and art director for the influential fashion label Proenza Schouler. He was also a founding member of Lansing-Dreiden, a New York-based transdisciplinary art collective that produced musical albums, a literary journal, and artworks. Reviews of his art and design projects have appeared in the New York Times, Vogue, and Another Magazine. Cardenas currently lives and works in Los Angeles.