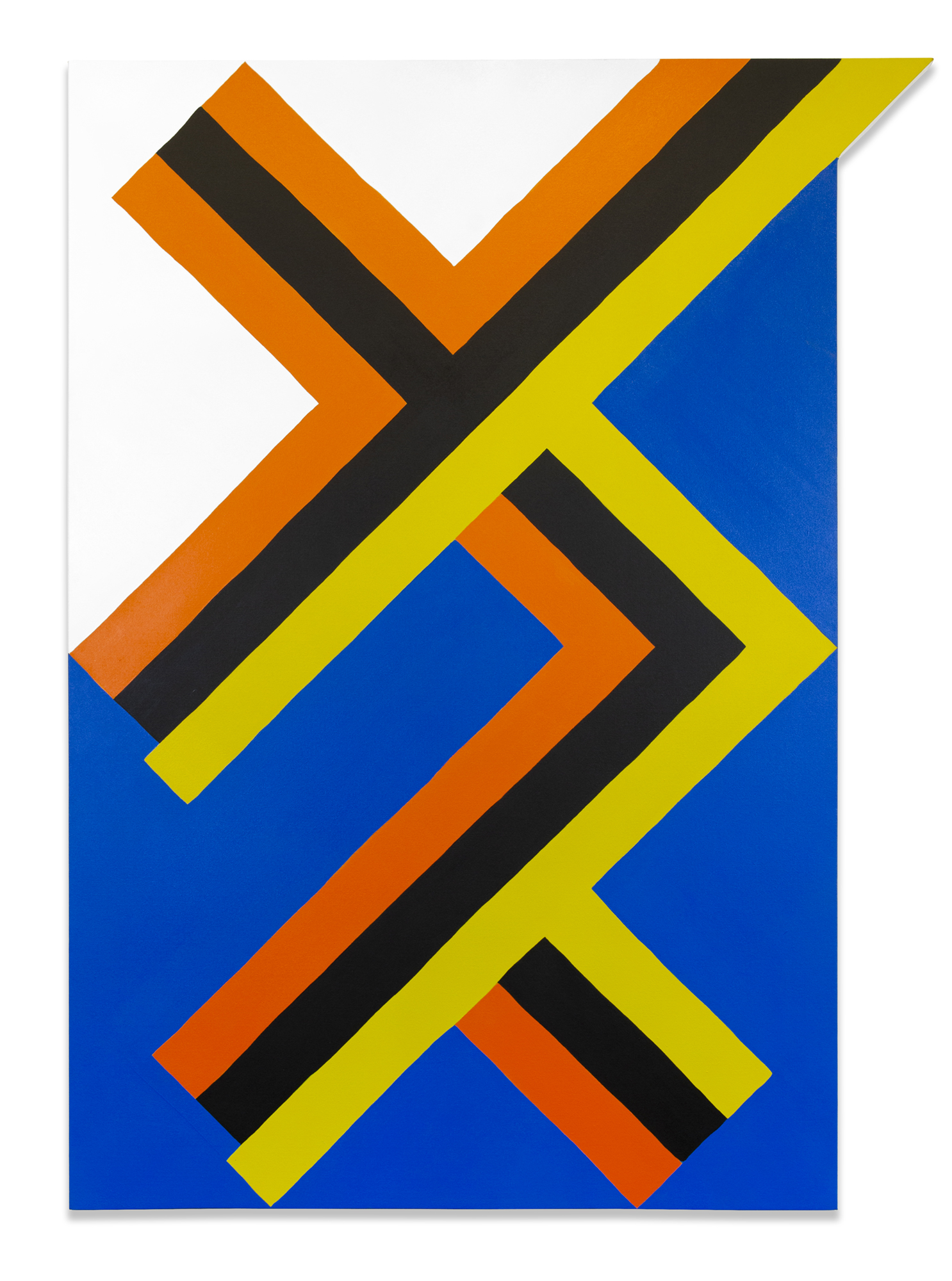 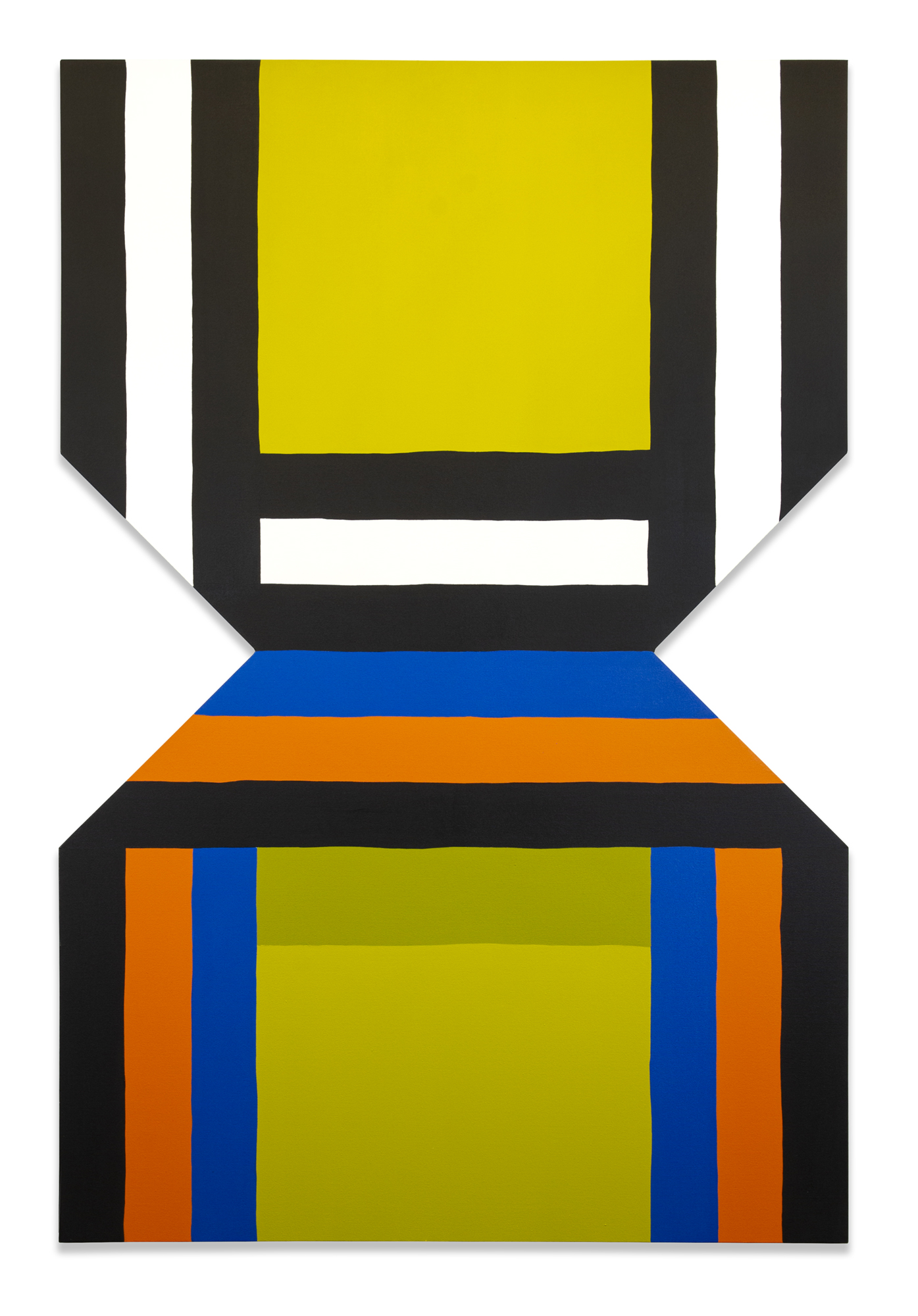 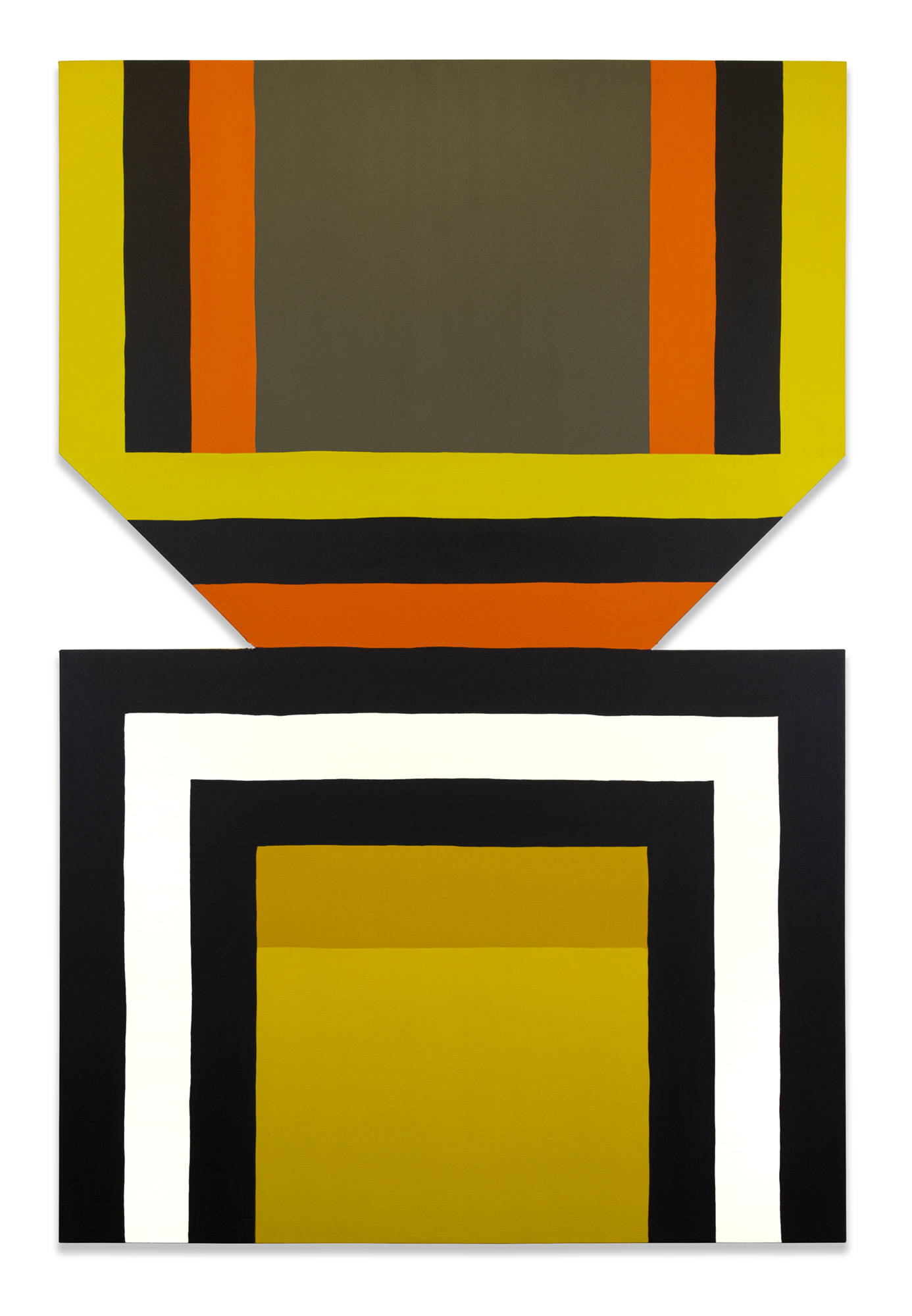 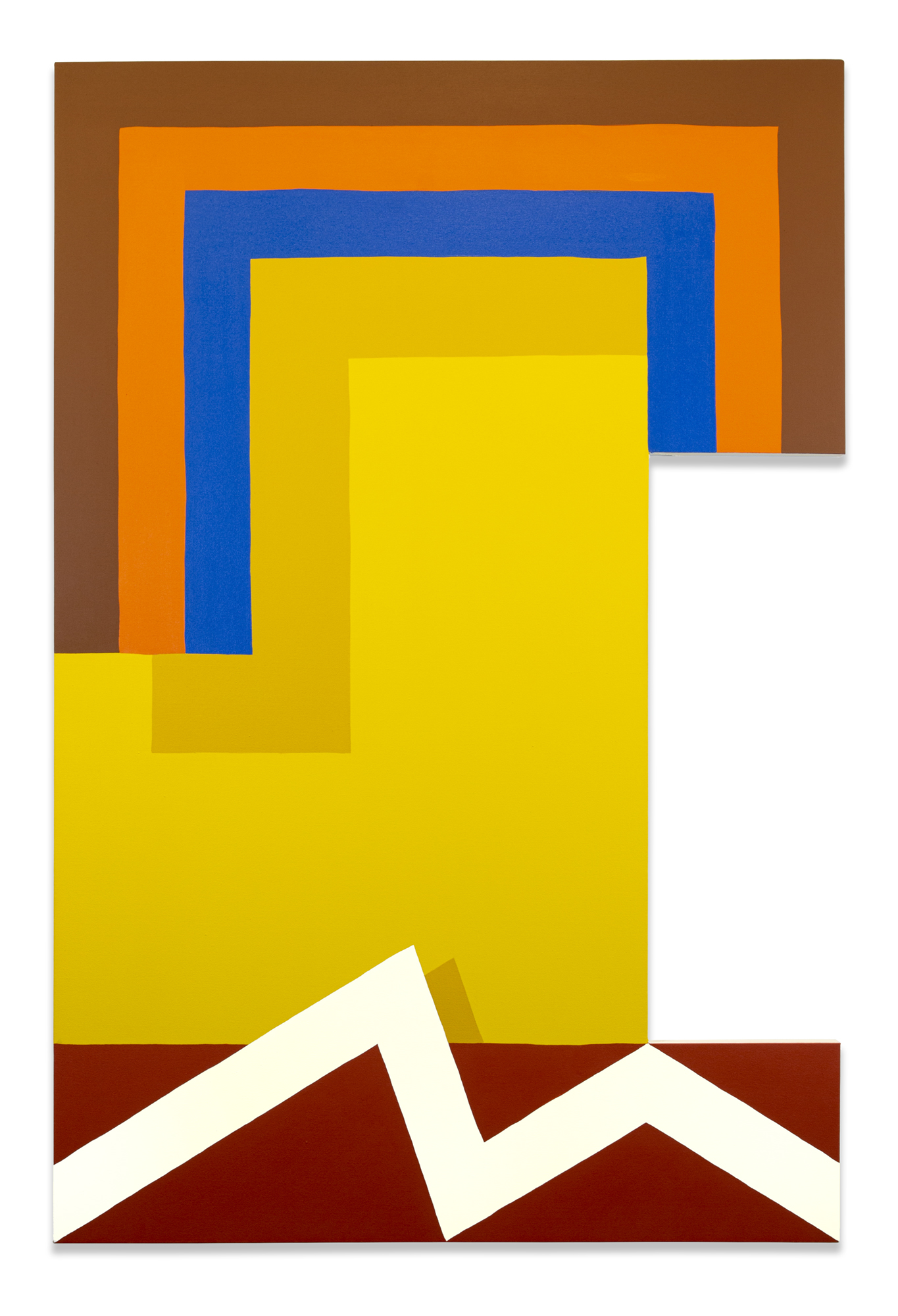 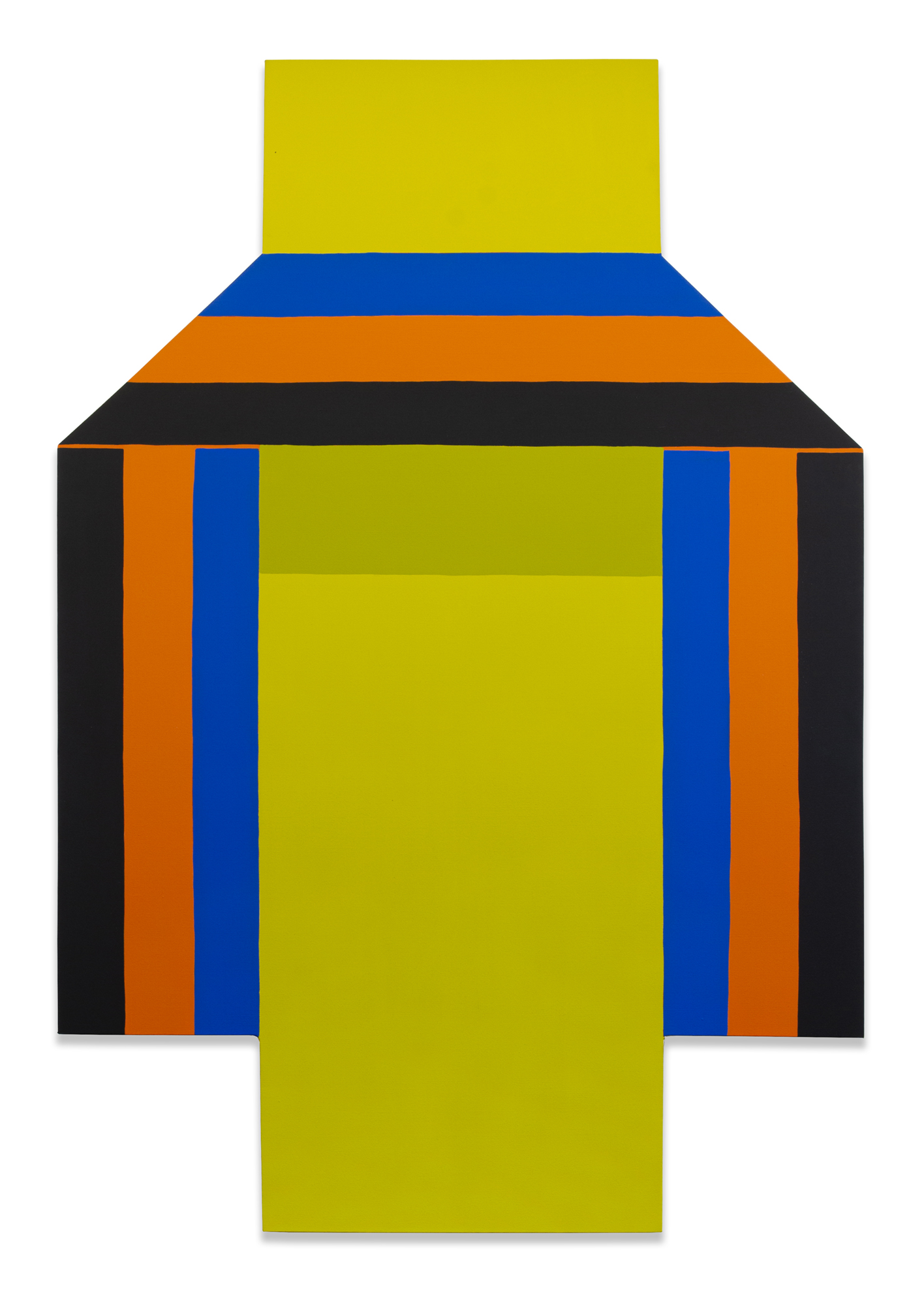 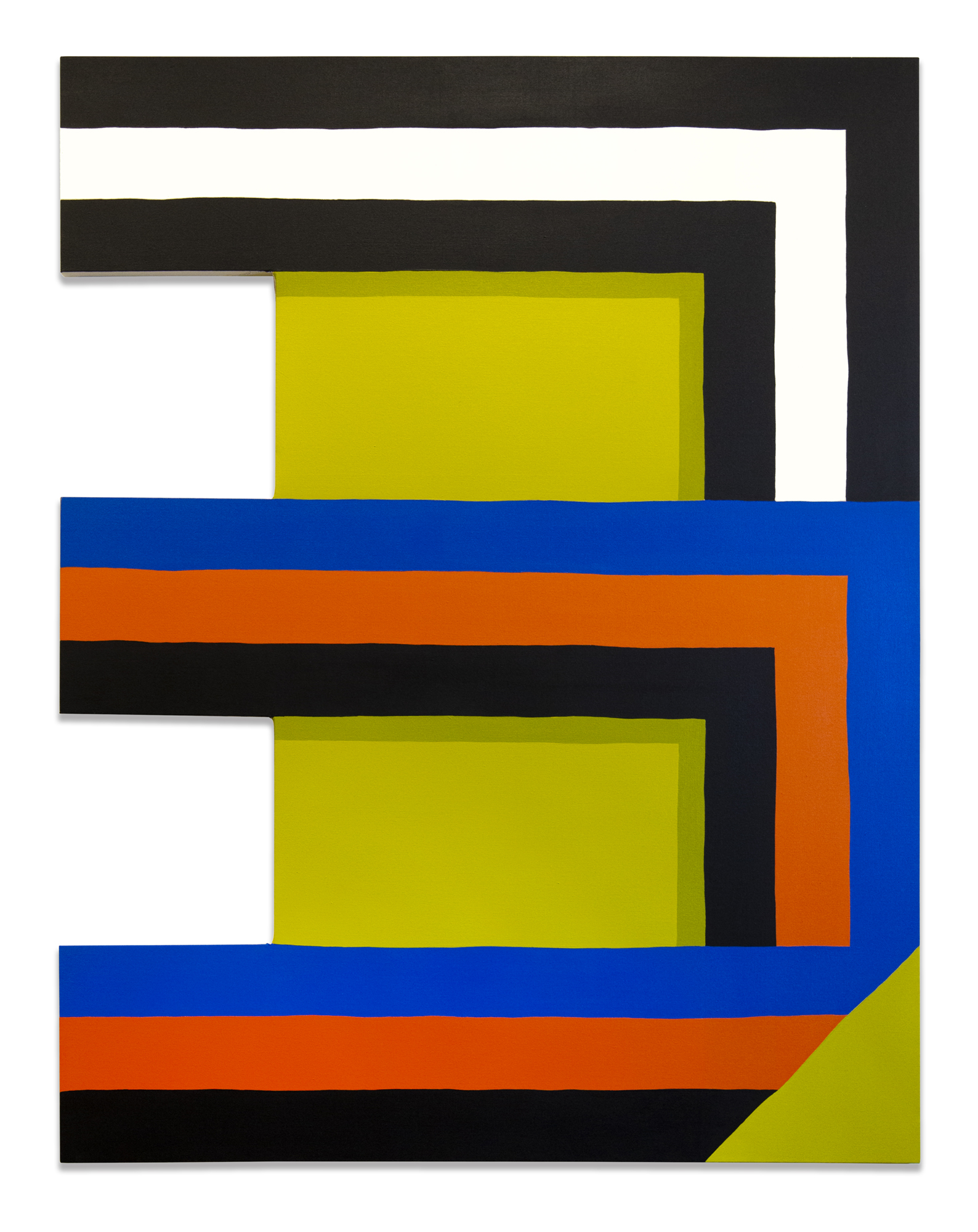 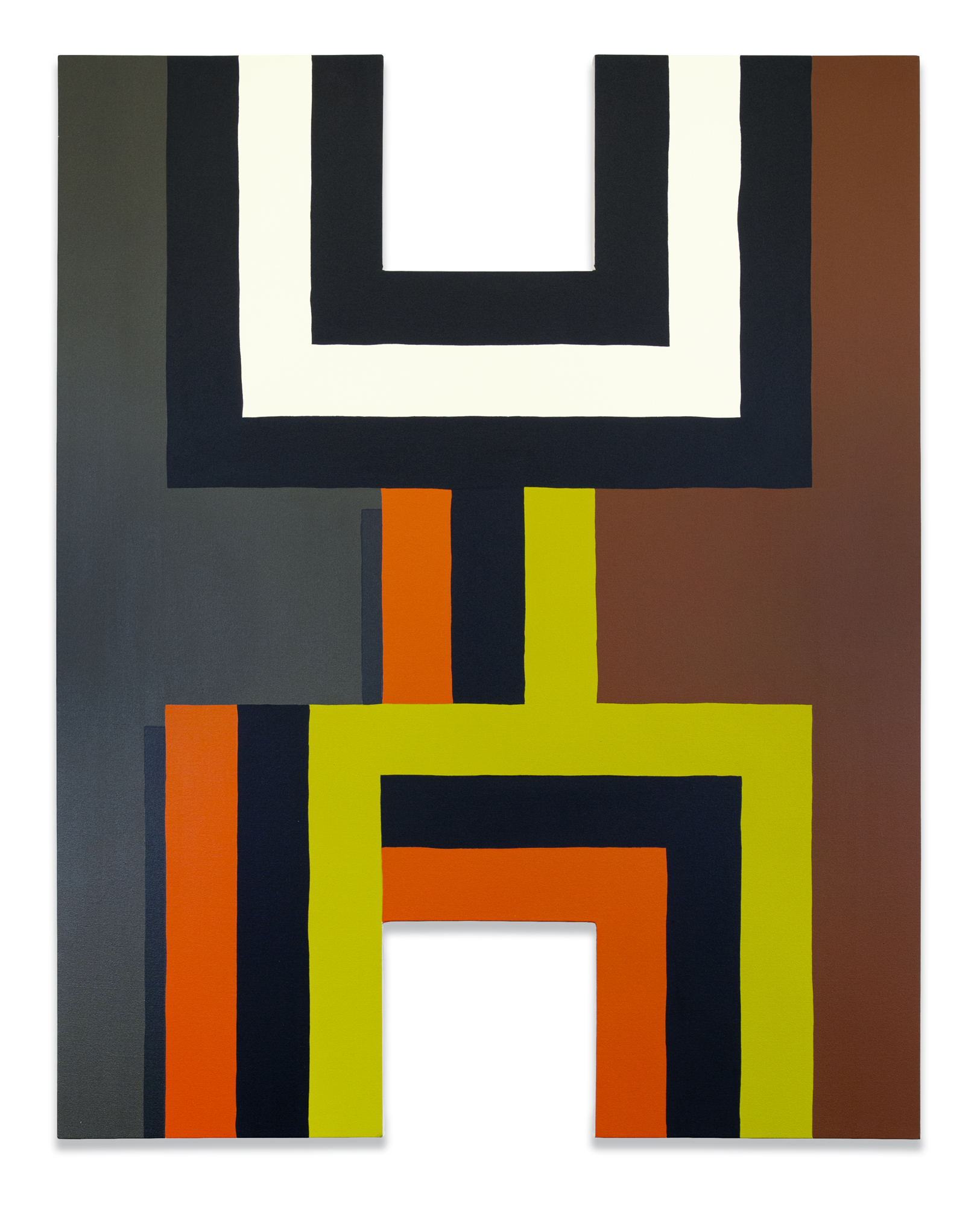 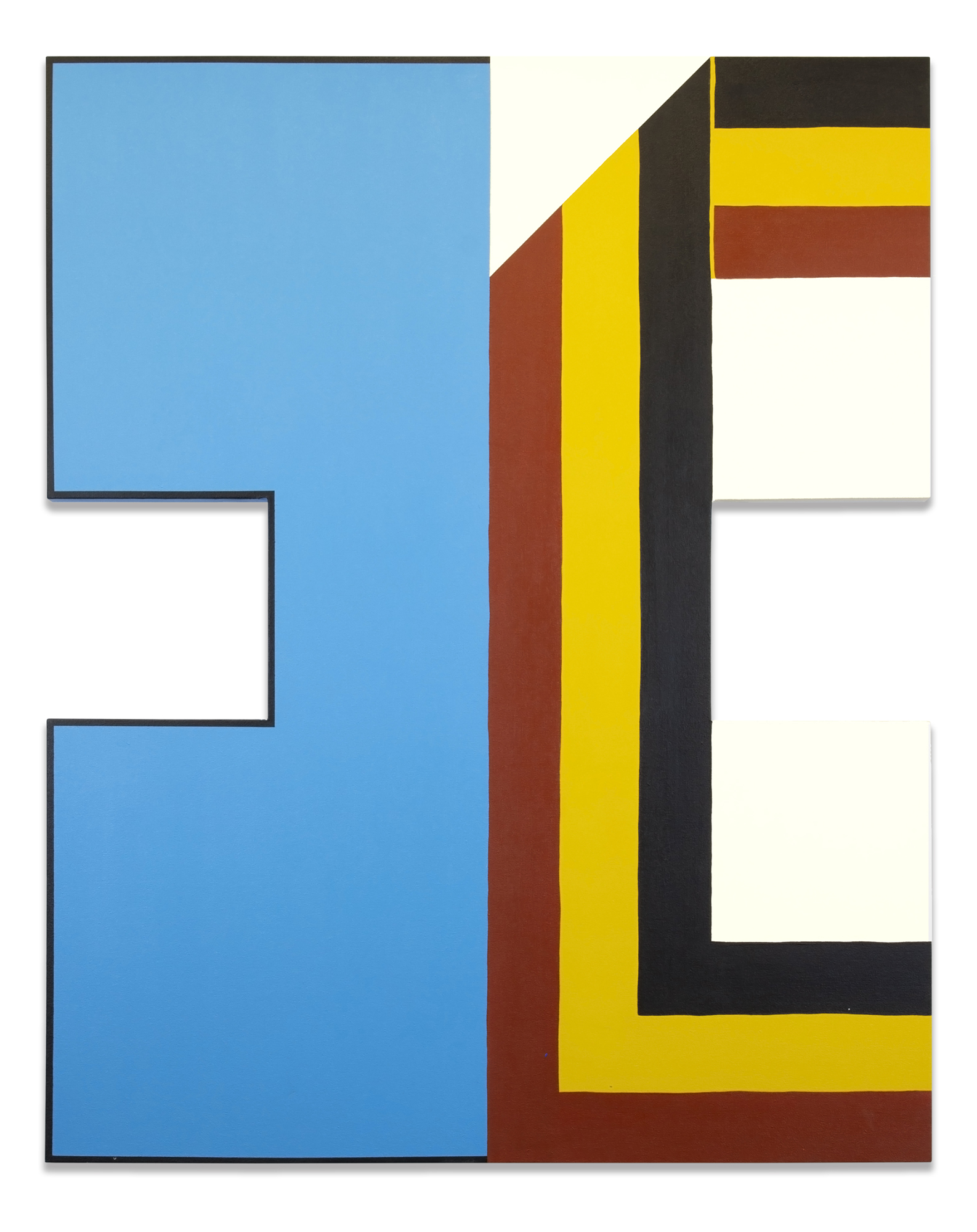 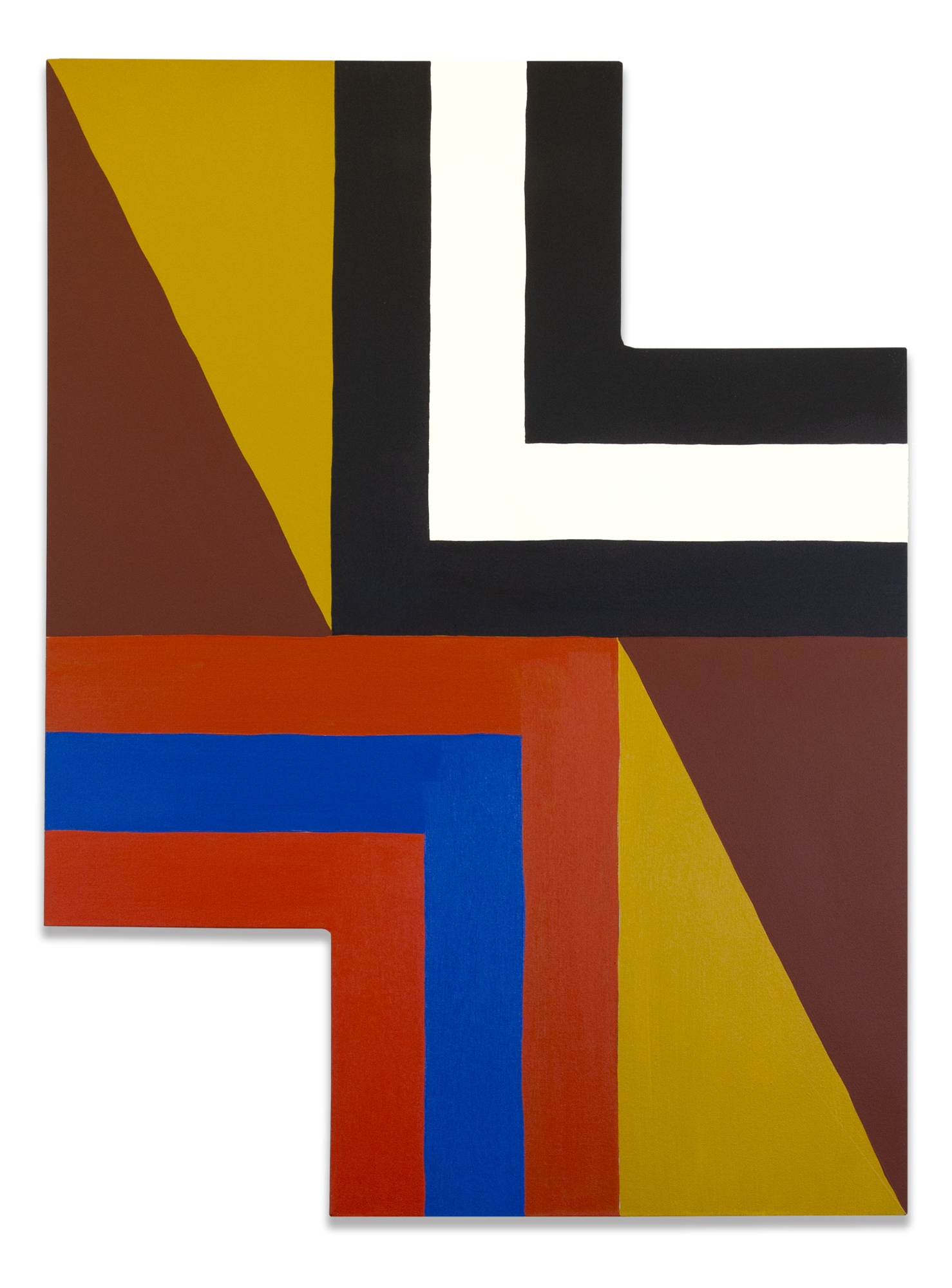 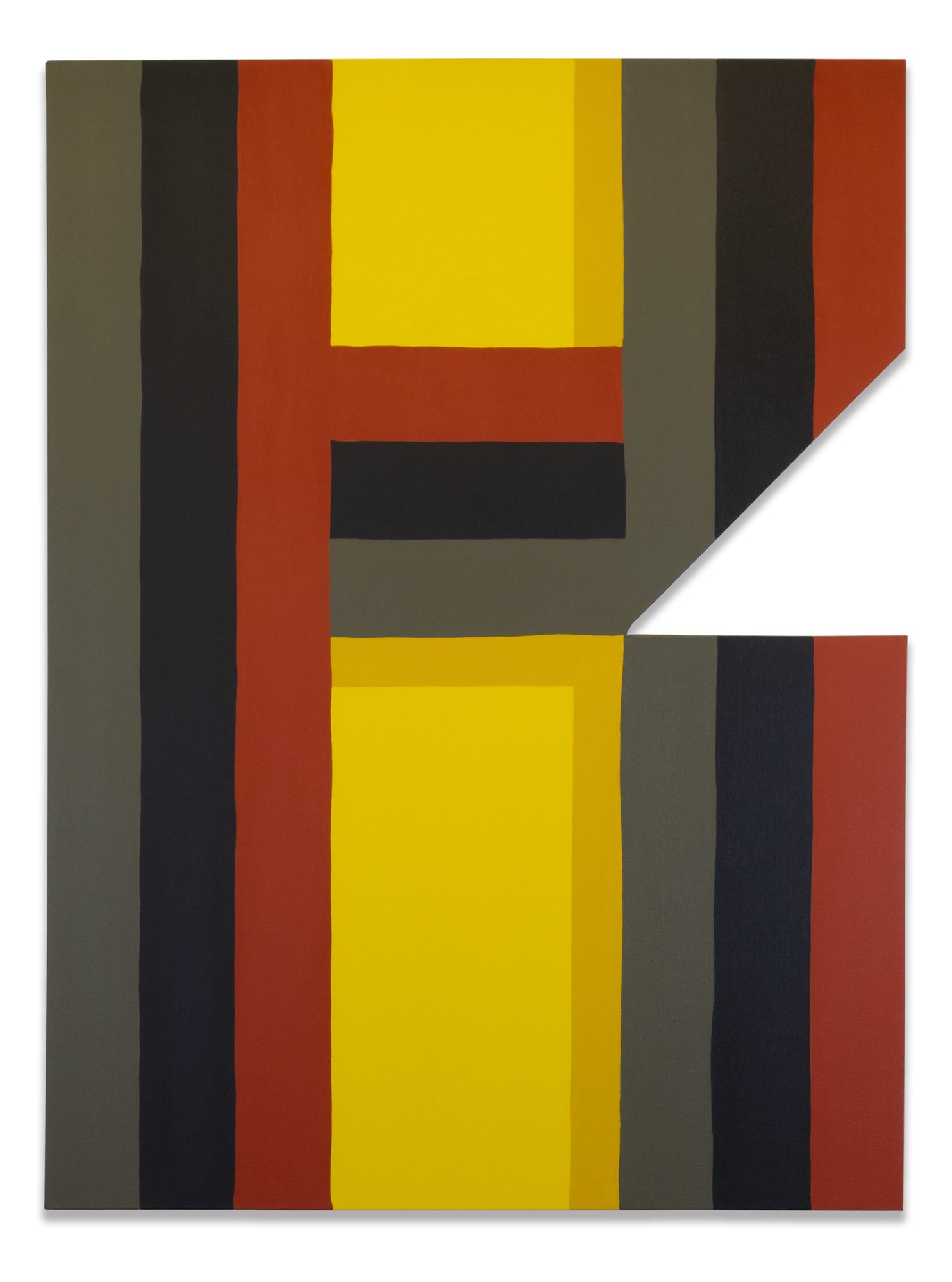 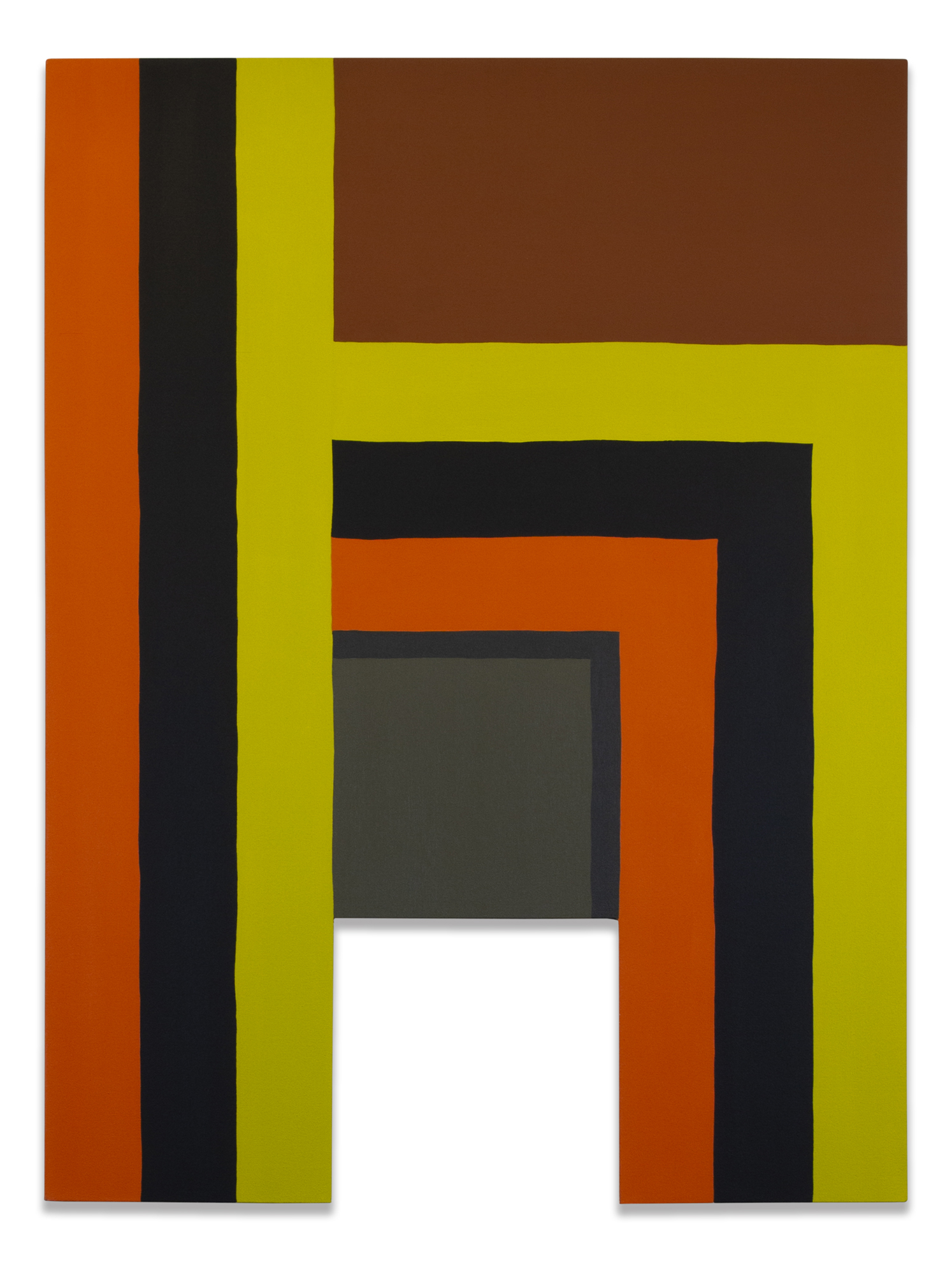 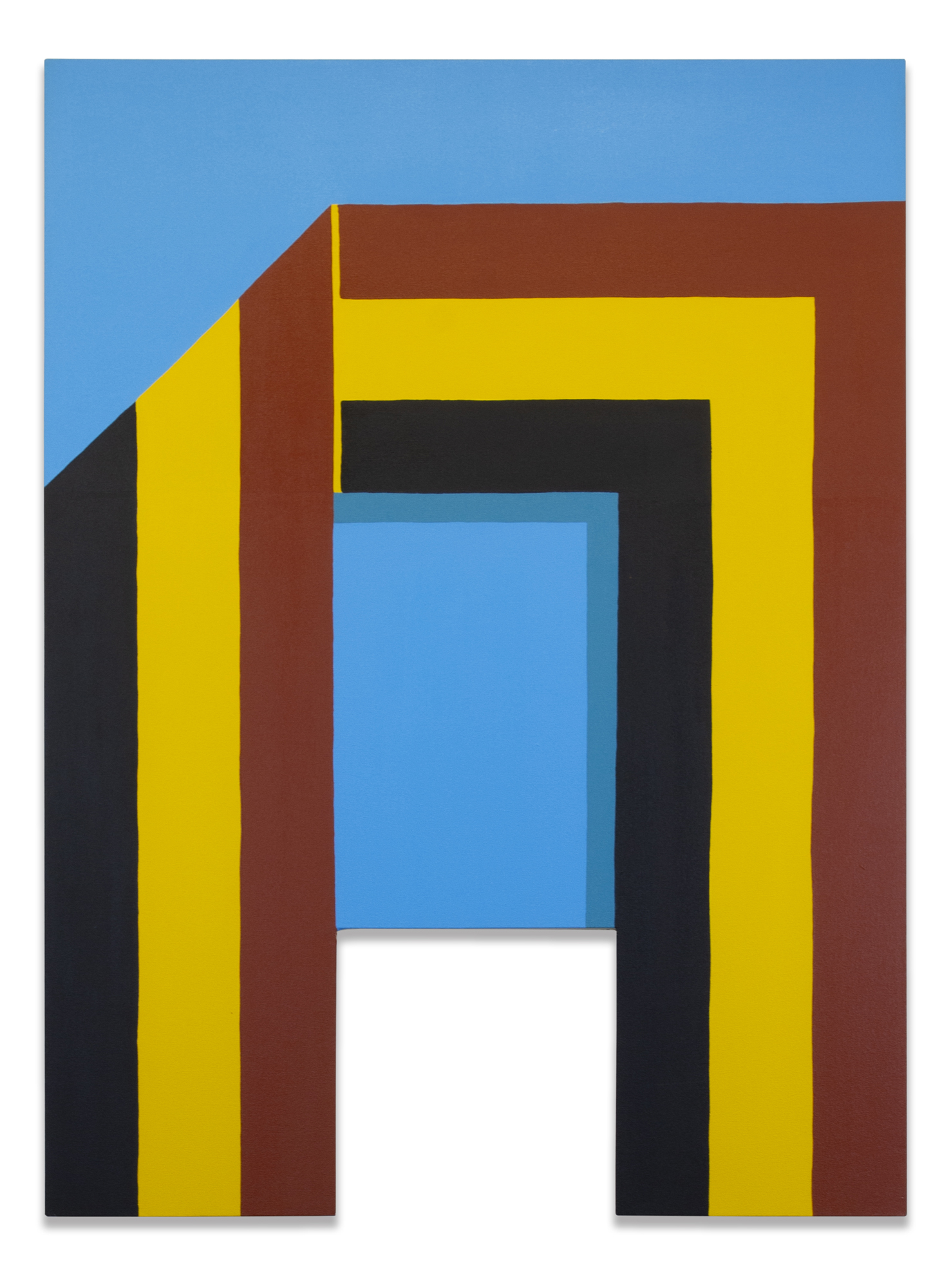 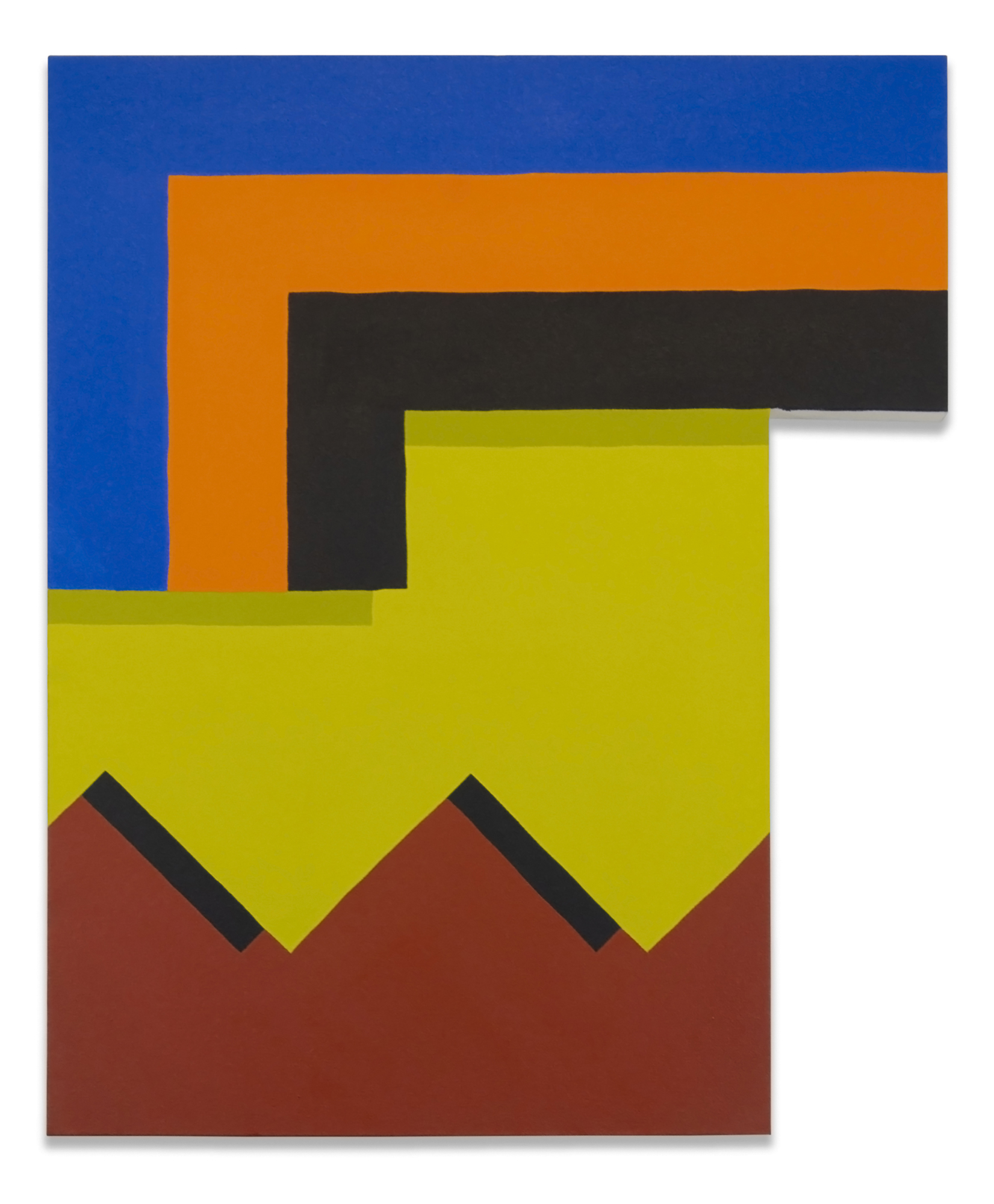 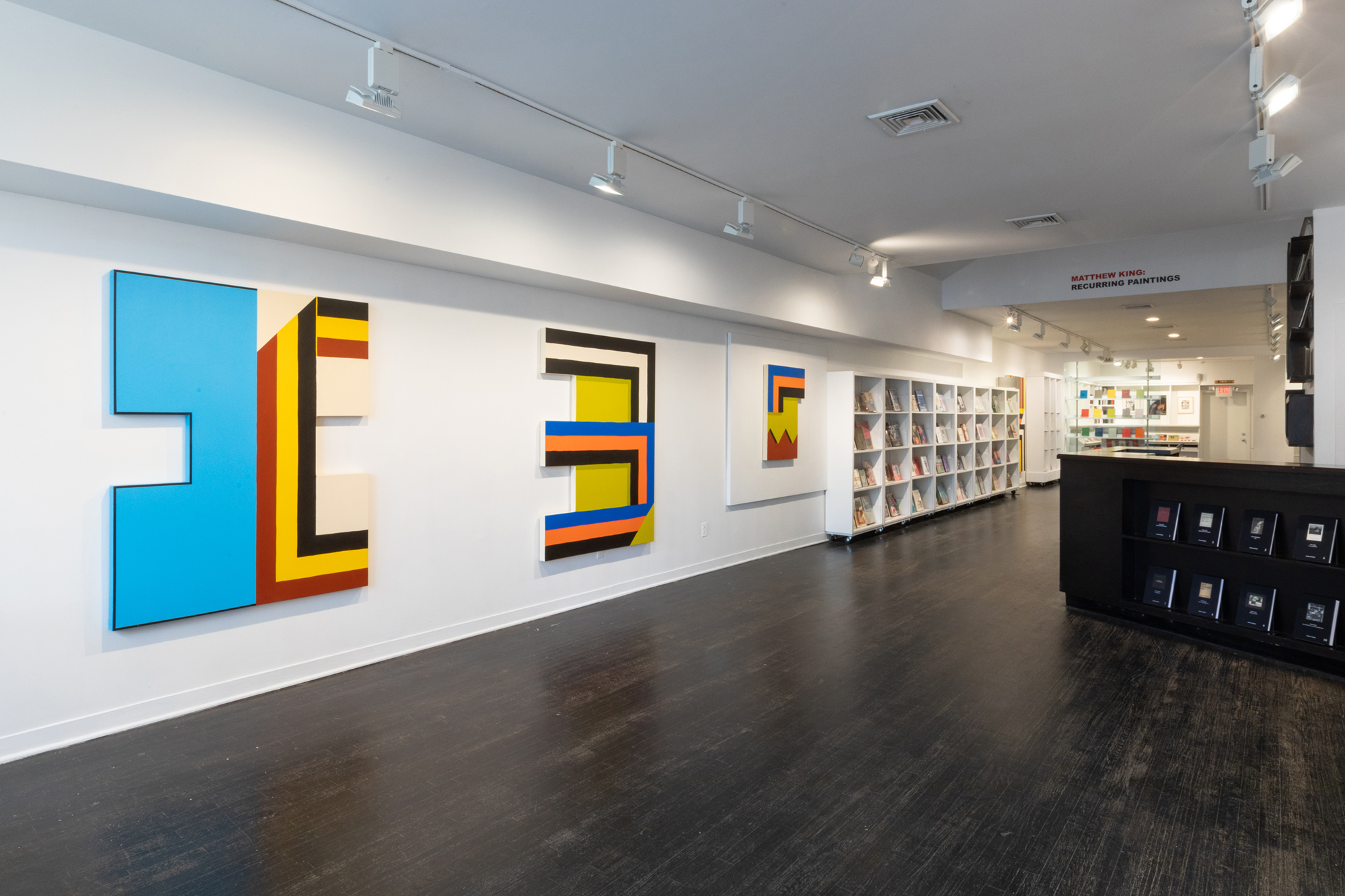 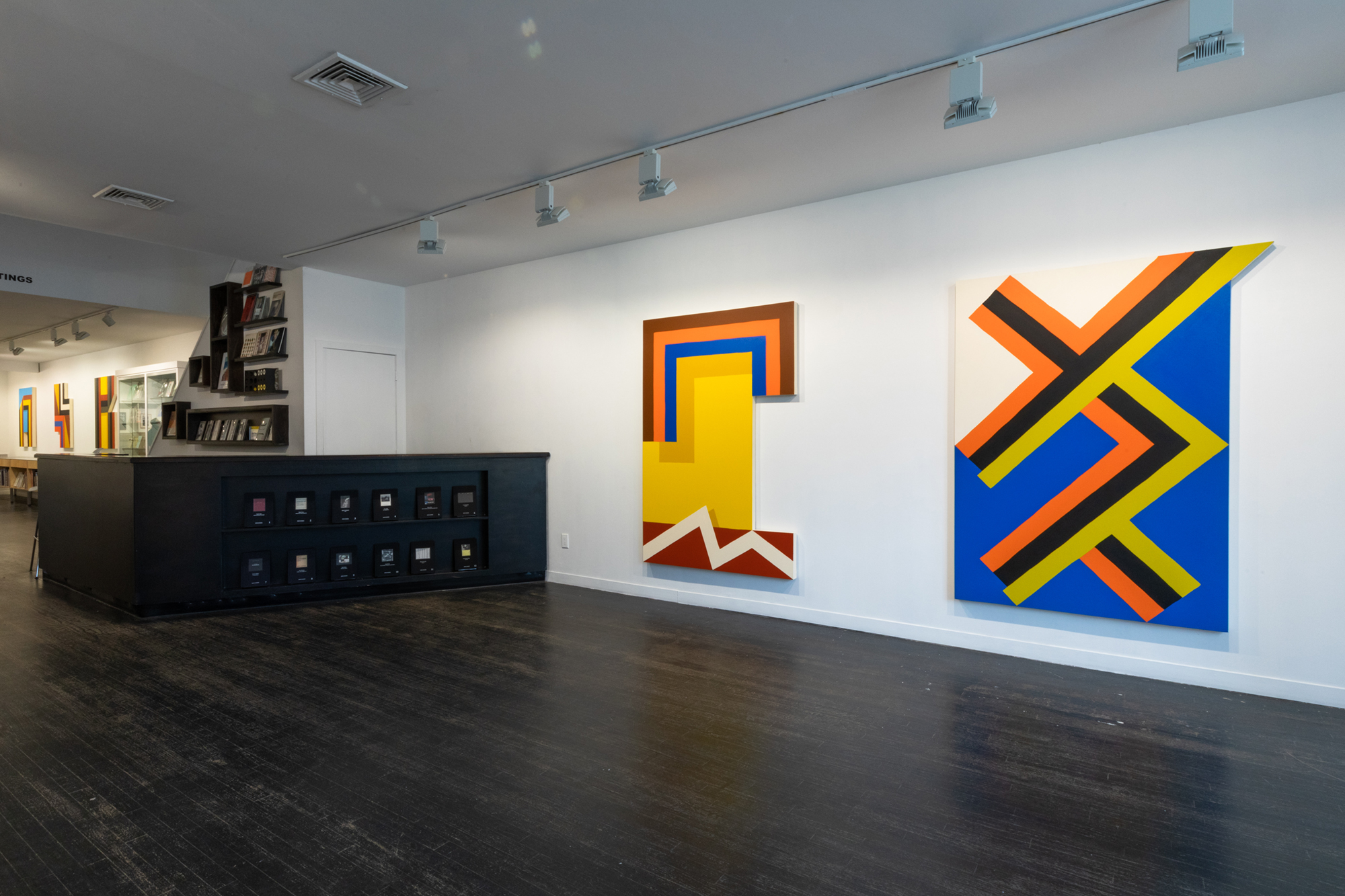 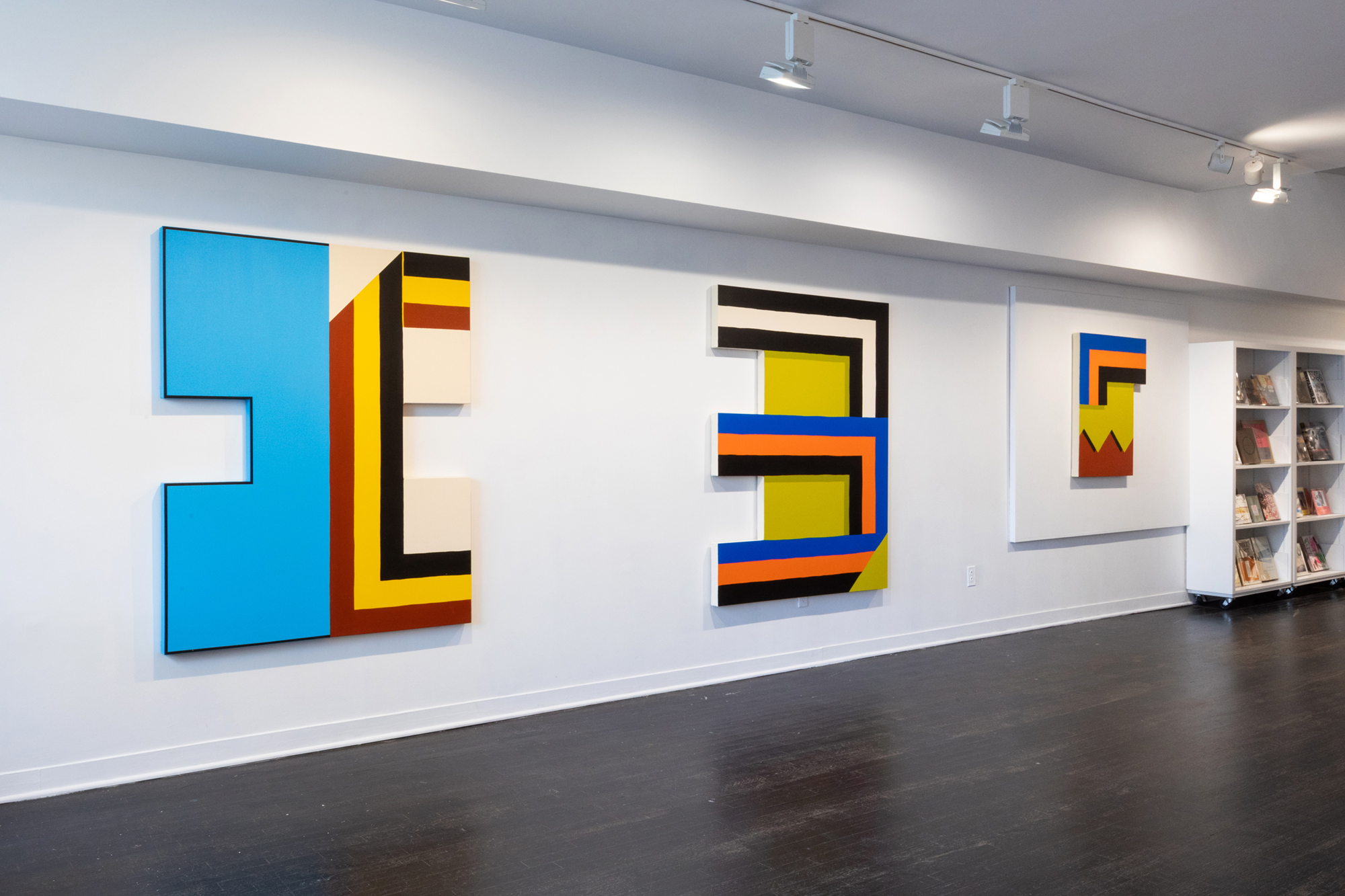 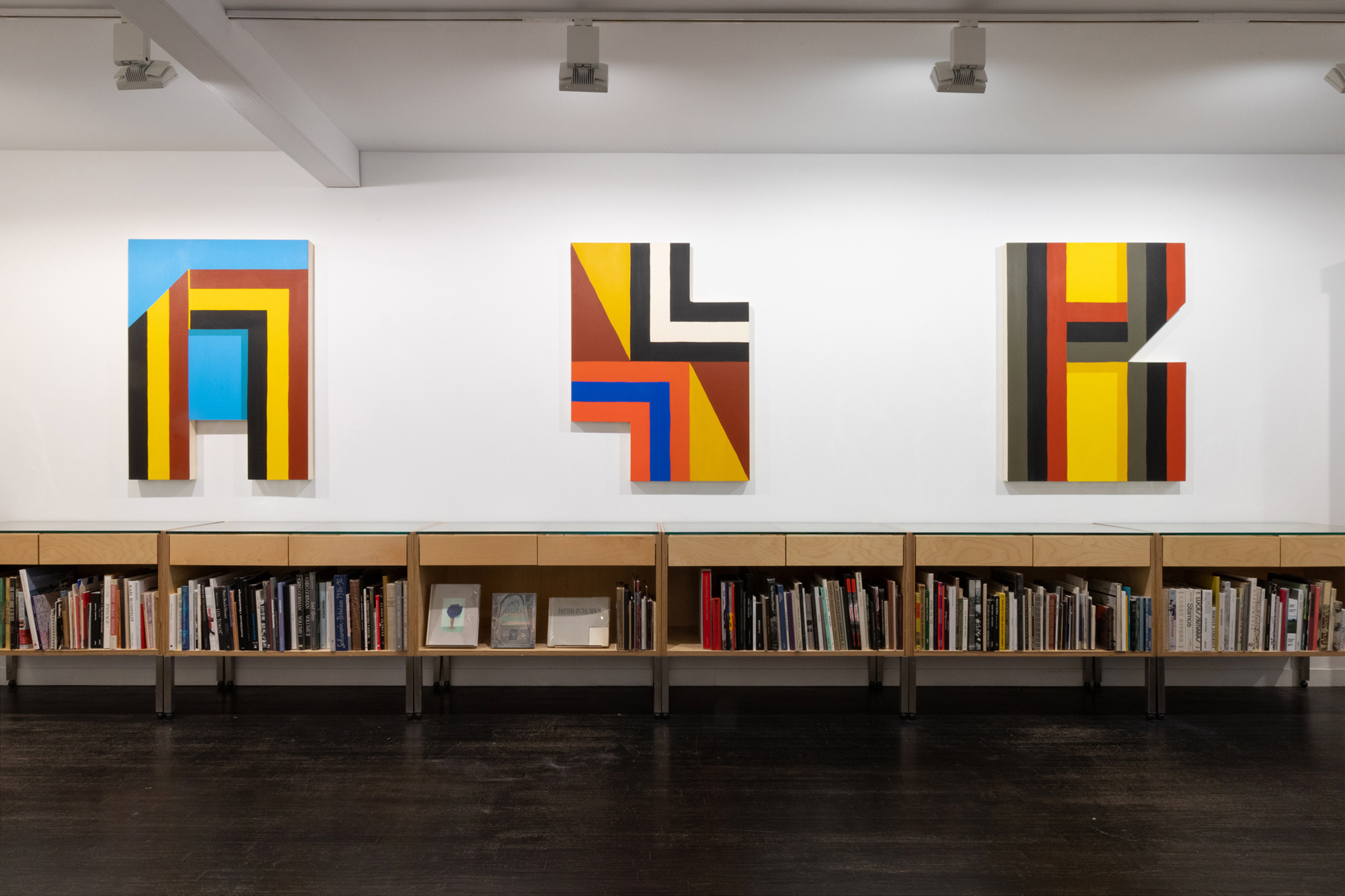 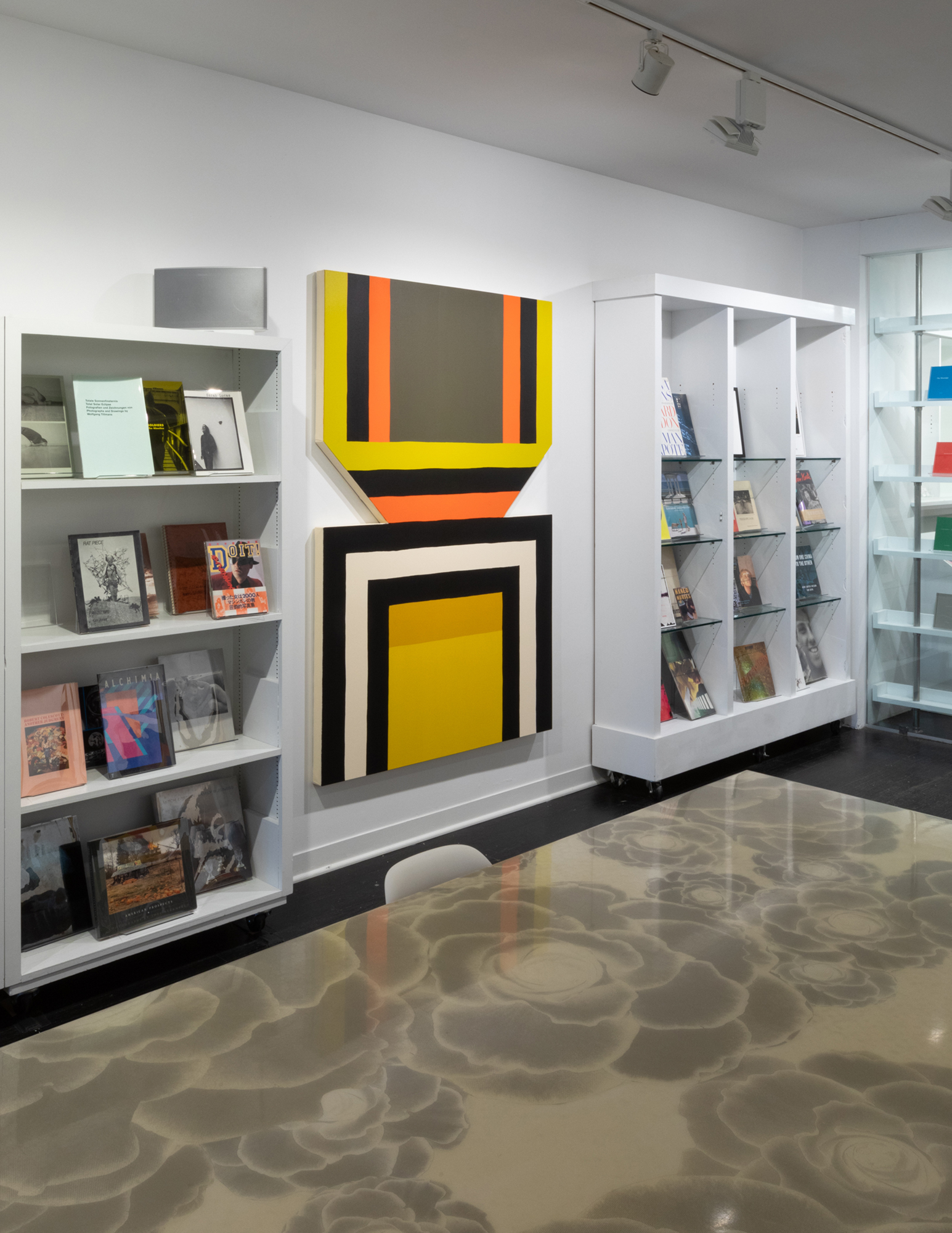 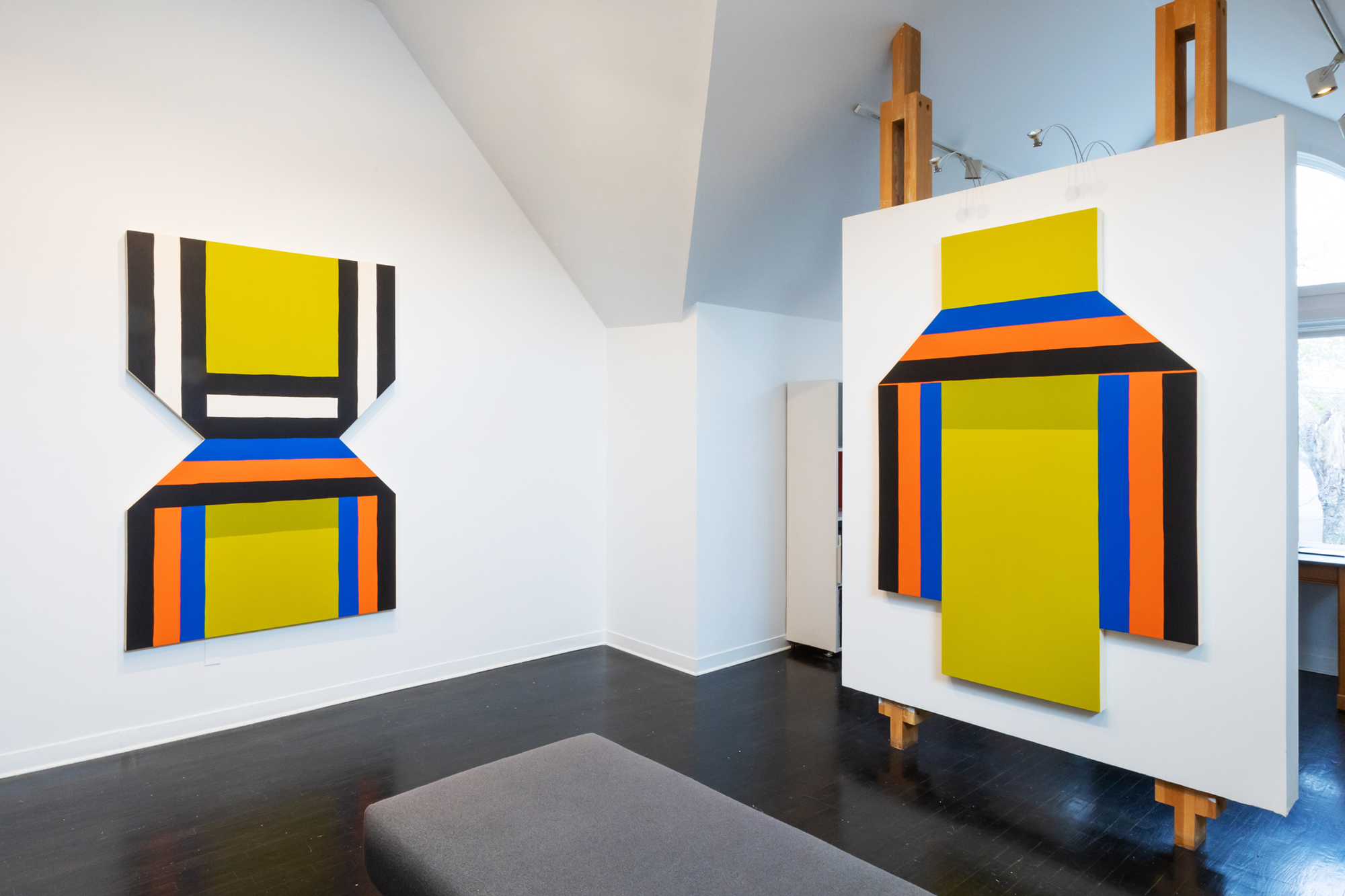 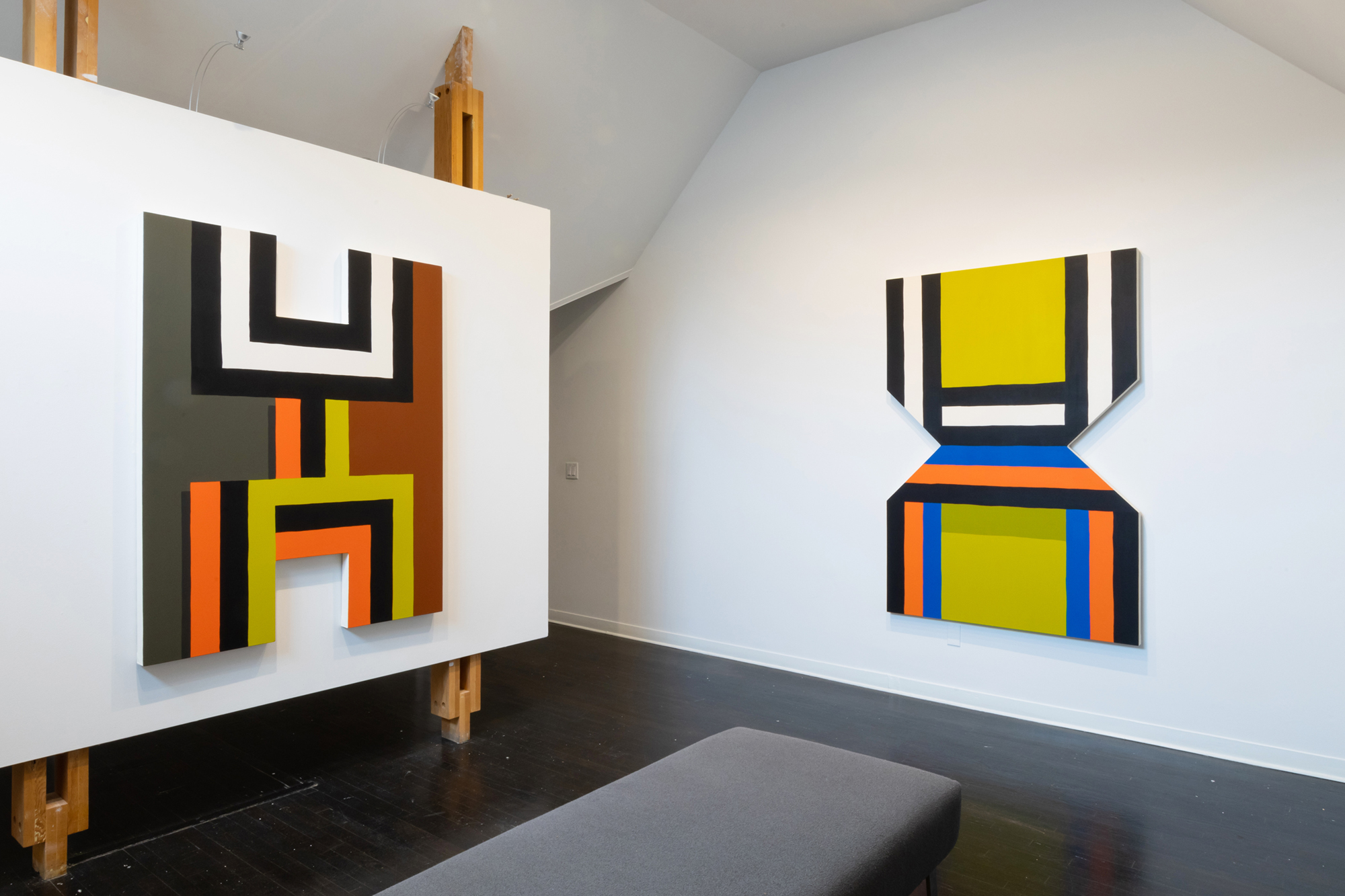 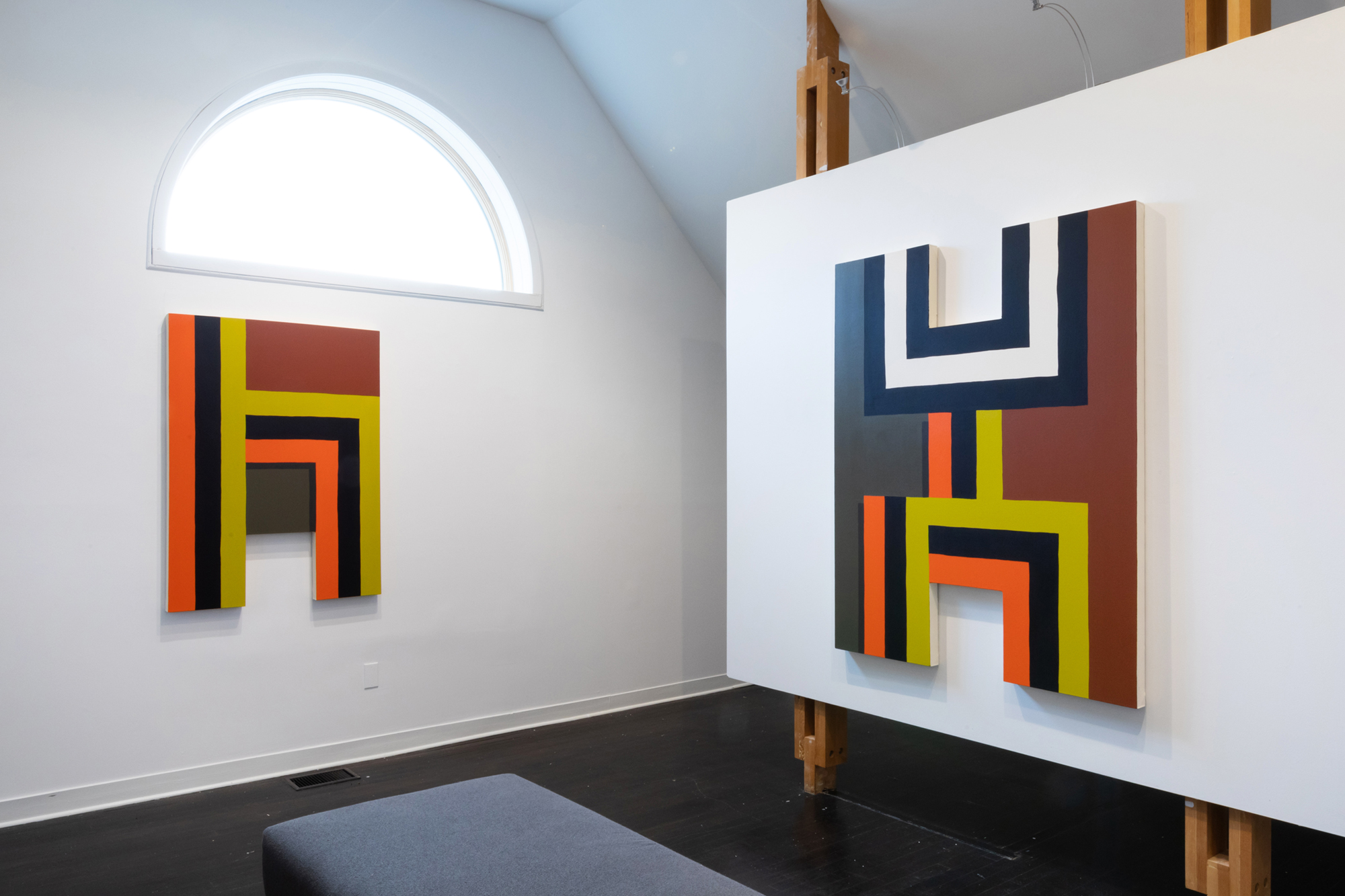 Recurring Paintings is Matthew King's third solo exhibition with Harper's Books. He has by now become a good friend of the gallery, and it seems appropriate to write a personal note about the artworks that we will be presenting. Actually, this approach is in tandem with the aesthetic of his recent body of work, as he is placing greater emphasis on the artist's hand. Although Matthew continues to explore the roles that minimalism, geometric abstraction, and color interaction play in his process, a visible personalized touch has entered the compositions. Or, as he put it to me, "Instead of being so regimented, everything is a little more open. Less tight-assed."

In prior paintings, Matthew was primarily engaged in mimicking the attributes of serialized production. Straight lines were meticulously executed with taped-edges, visual information was determined by mathematical patterns, and industrial materials such as Oriented Strand Board (OSB) — colloquially known as chipboard — were used as surfaces. He employed these techniques to objectify his role as a craftsman so that it appeared as if the material itself determined the outcome, rather than an inner expressive drive. Much of the same logic applies to the fourteen works in Recurring Paintings, but subtle details bring forth an entirely different read. For one, Matthew has switched over to building and stretching his own shaped canvases in stark contrast to the weightiness of the prefabricated OSB substrates. He also uses acrylic pigment alone, without the enamel and lacquer finishes of his previous work. Only a glance is needed to register how light and buoyant these new paintings feel. Further, Matthew has done away with using straightedges as guides when rendering colored shapes and lines. The edge of each swath has the characteristic waviness of a steady hand: generally straight and clean but with minor fluctuations along its course. Embracing this imprecision, he accentuates the optical vibration already created by his interplay of form and chroma, figure and ground. A pulse runs throughout the canvas, giving his approach an organic quality typically lacking in austere hard-edged abstraction.

For the most part, these works are quite large. Matthew hasn't abandoned having viewers encounter his paintings at nearly human scale. Perhaps this adds to the sense that there's some sort of life to them. Because of their vitality, I'm excited to exhibit this new body of work and watch Matthew's studio output evolve. Continuity in change and change in continuity: the recurring pulse that keeps his art moving. I hope that you can join both of us at the opening next week to experience this series firsthand.

Matthew King completed his BFA at the Massachusetts College of Art and Design in 2010, where he was granted the Edward Movitz Painting Award. He has exhibited around the East Coast of the United States, including Boston, East Hampton, Miami, and Providence. King lives and works out of Boston.