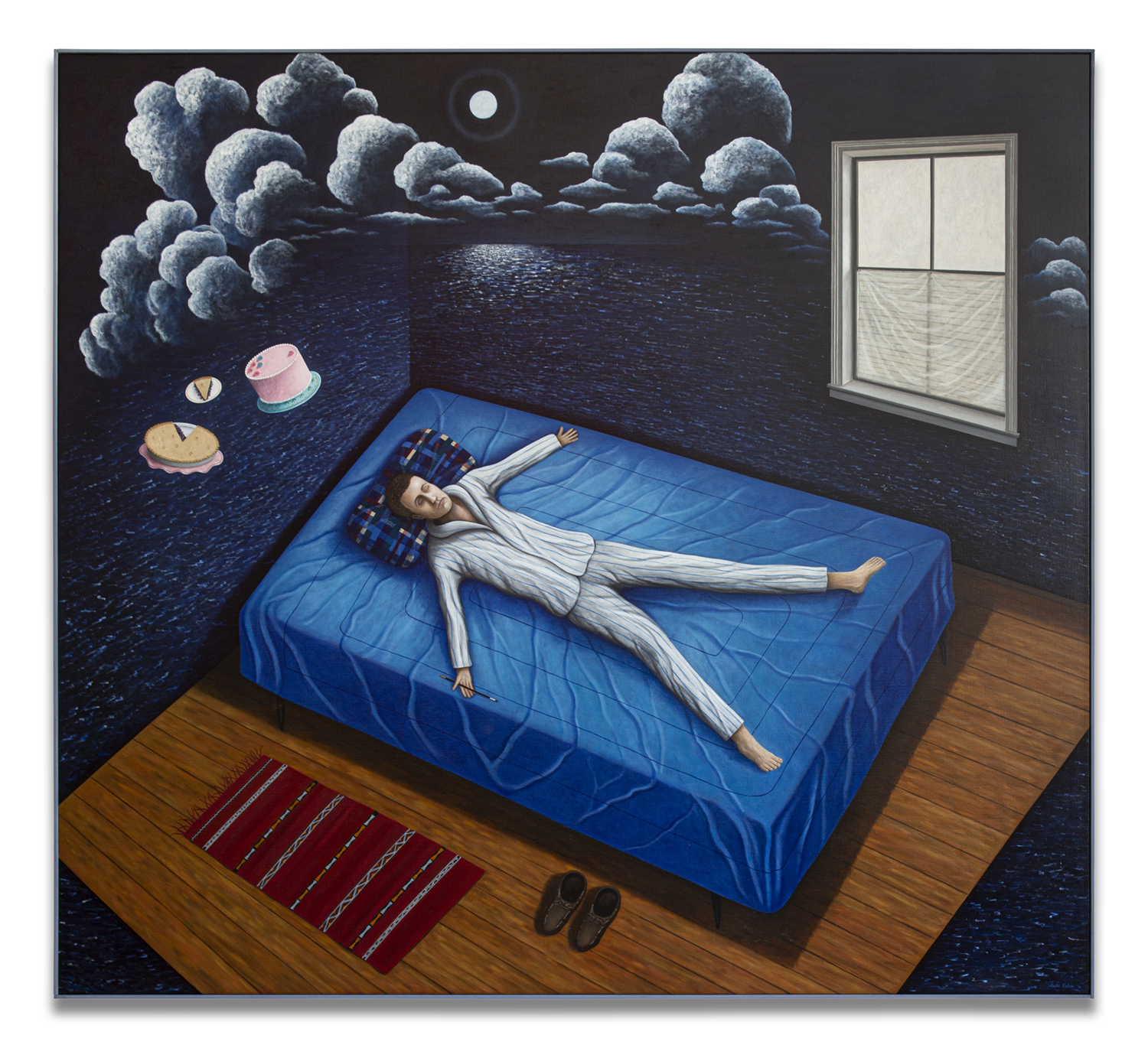 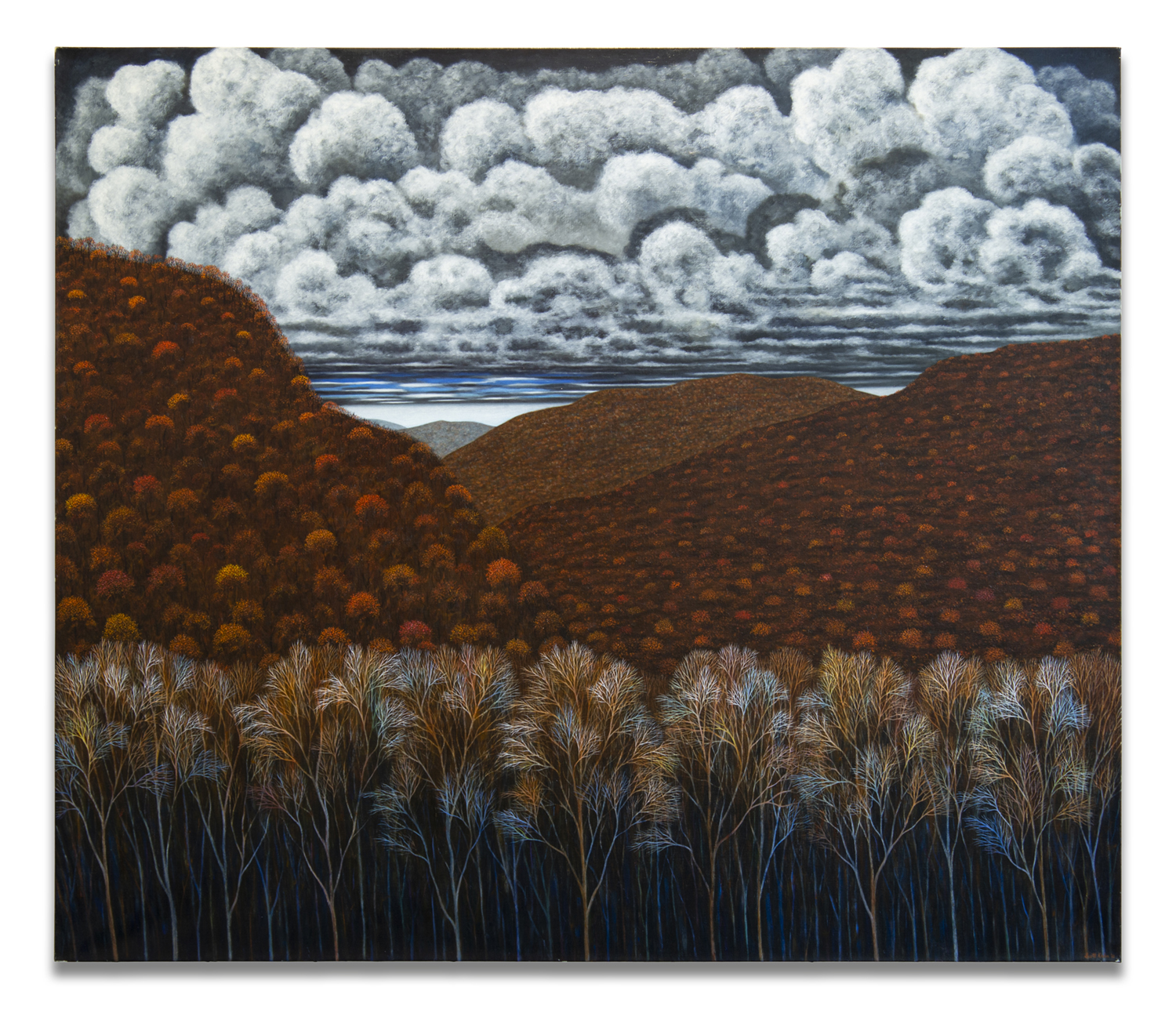 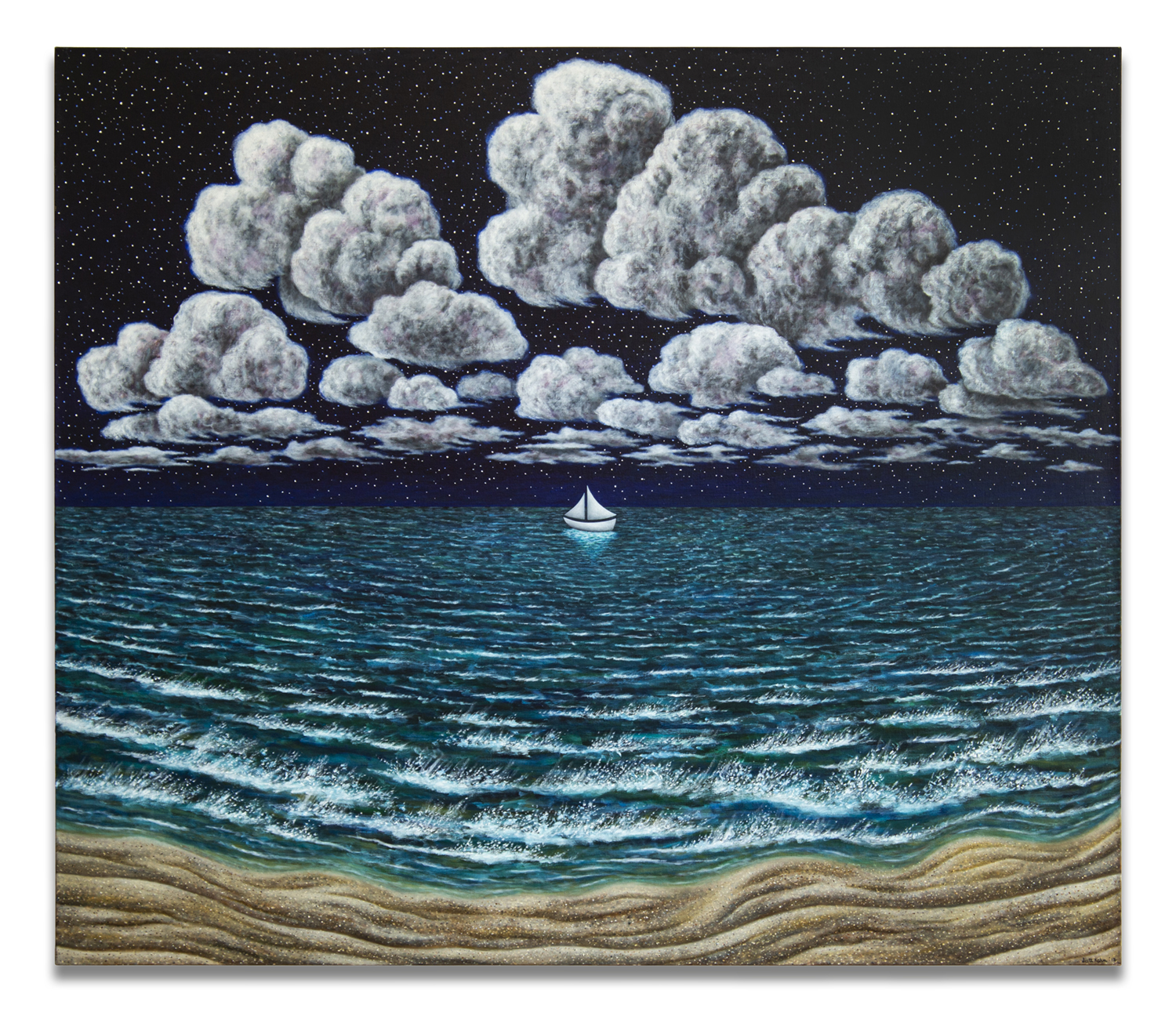 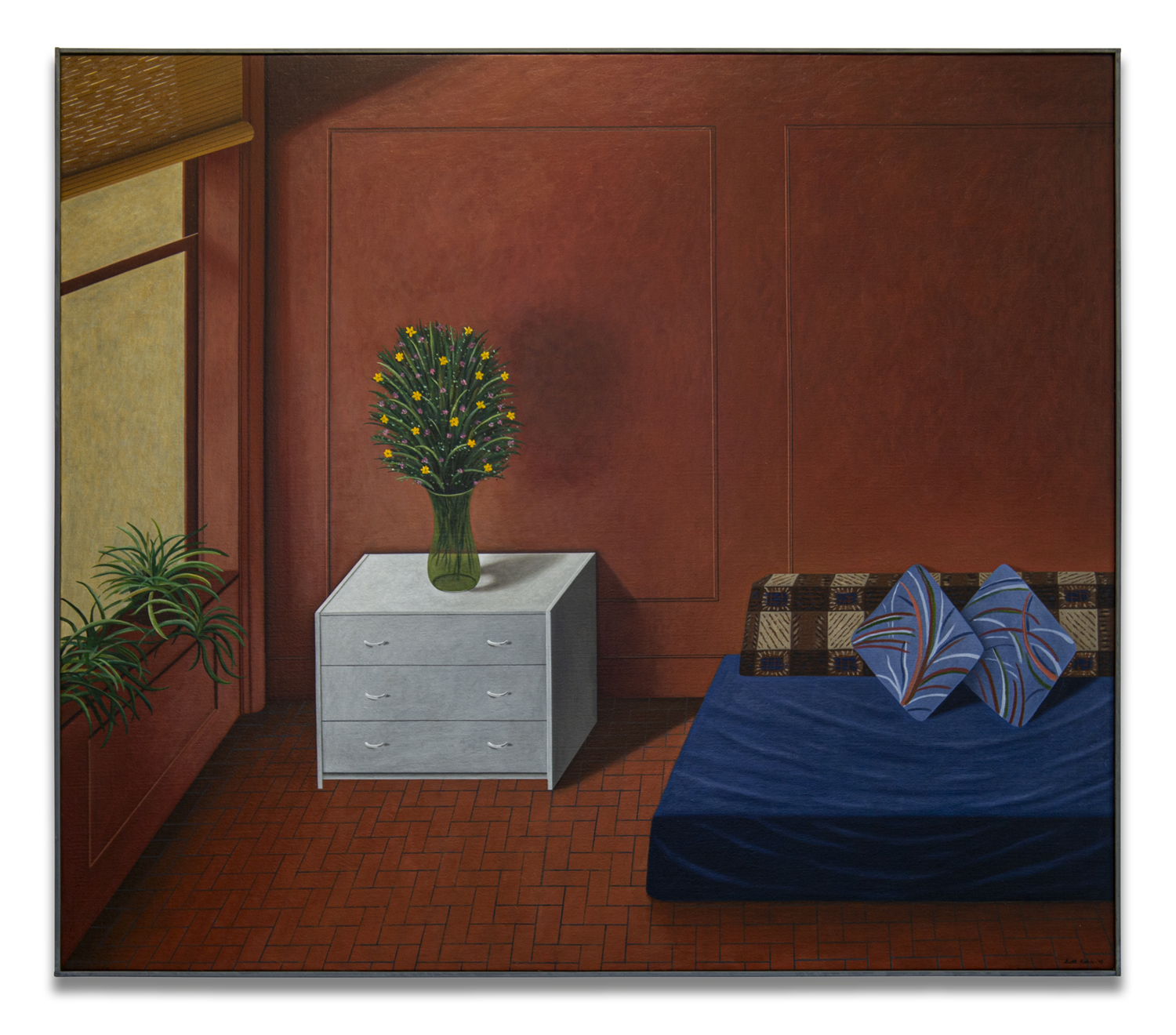 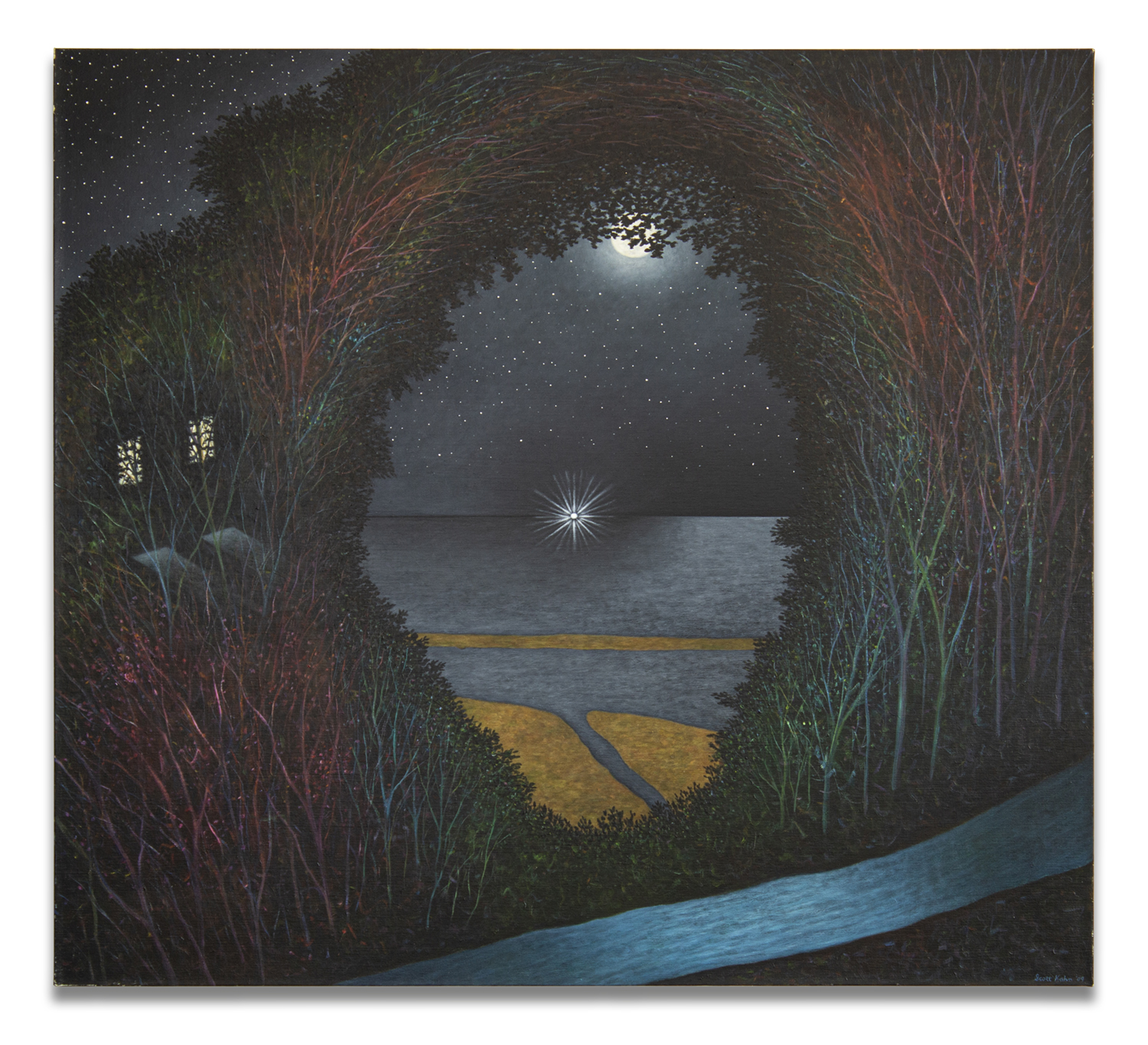 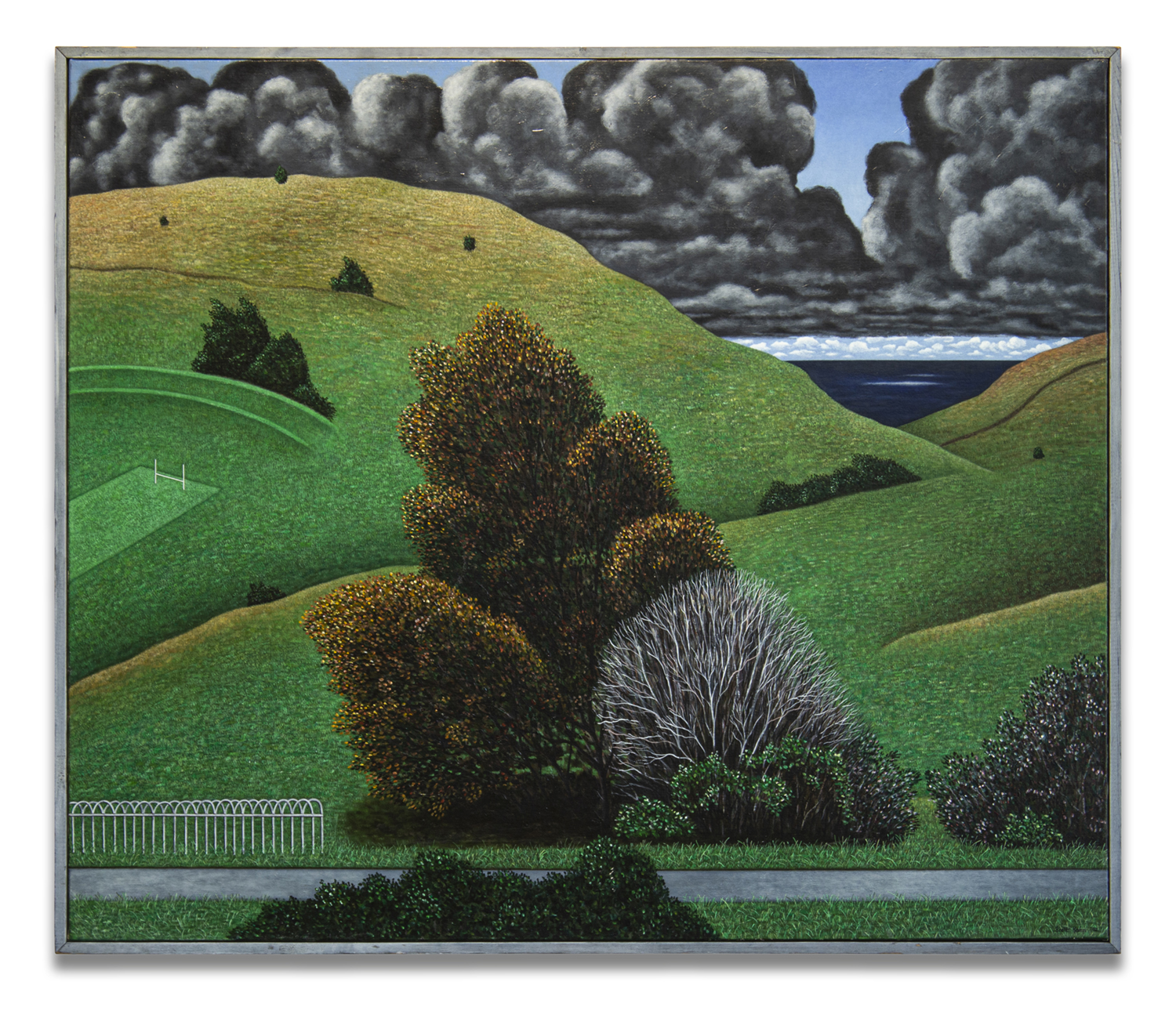 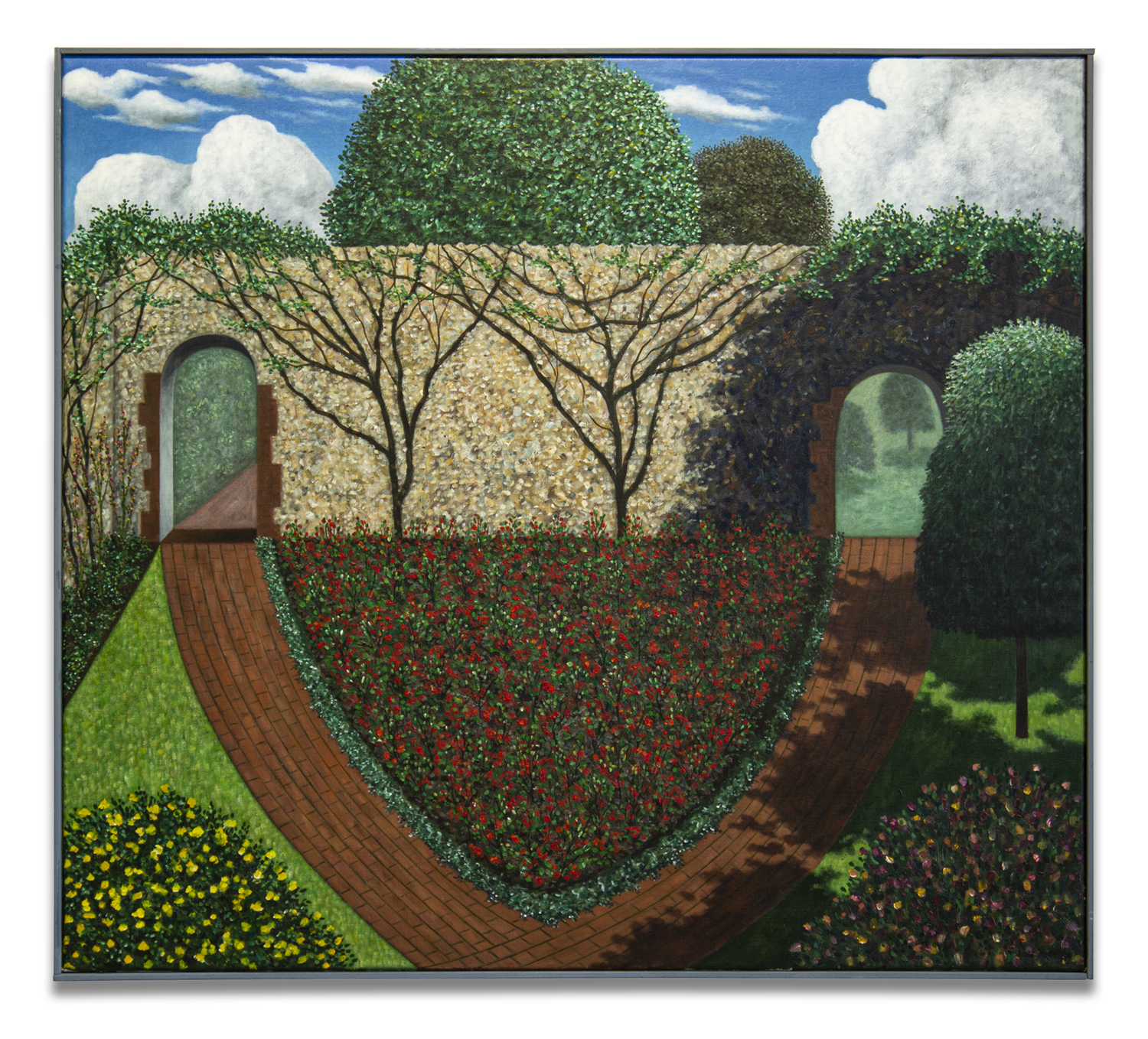 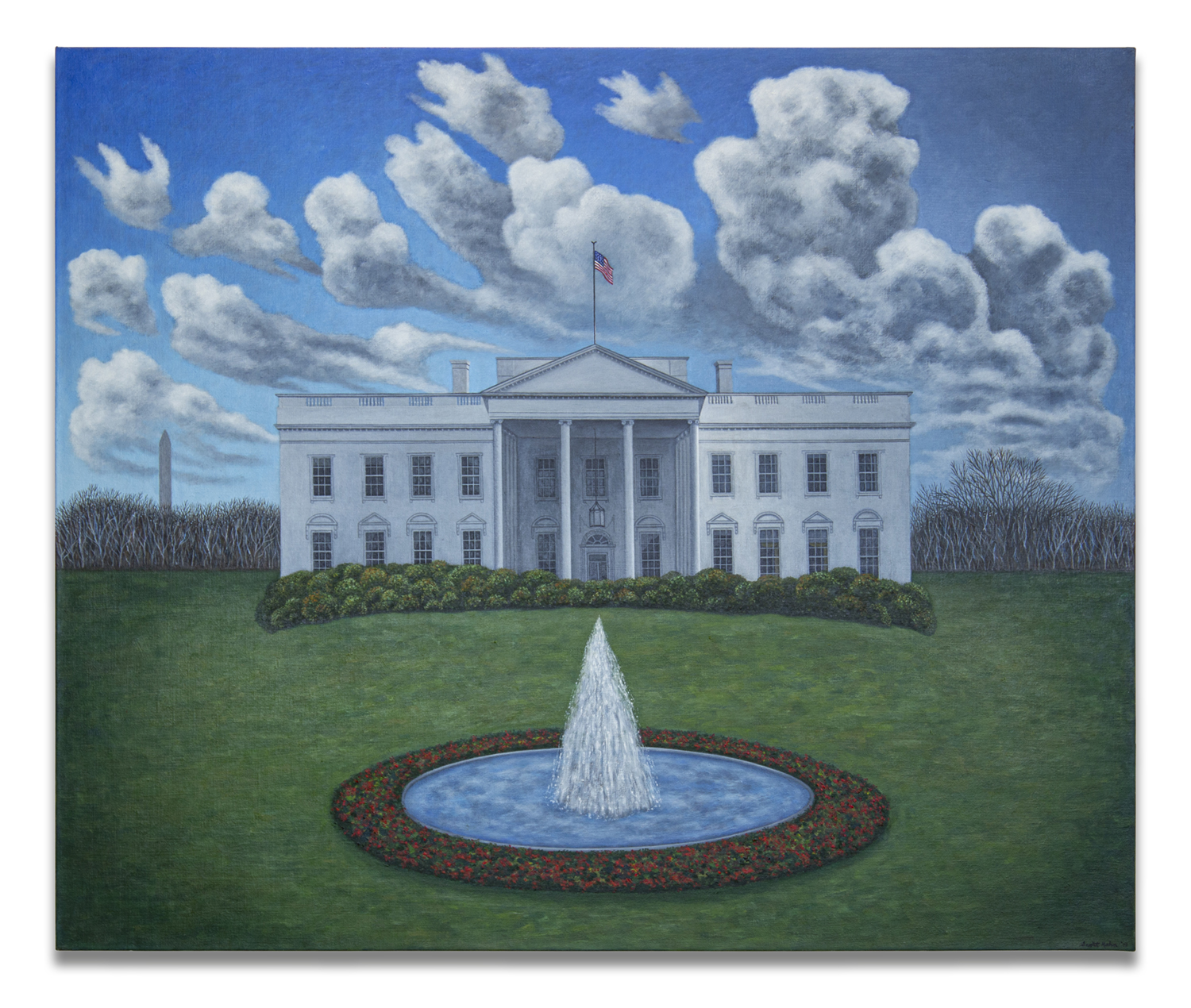 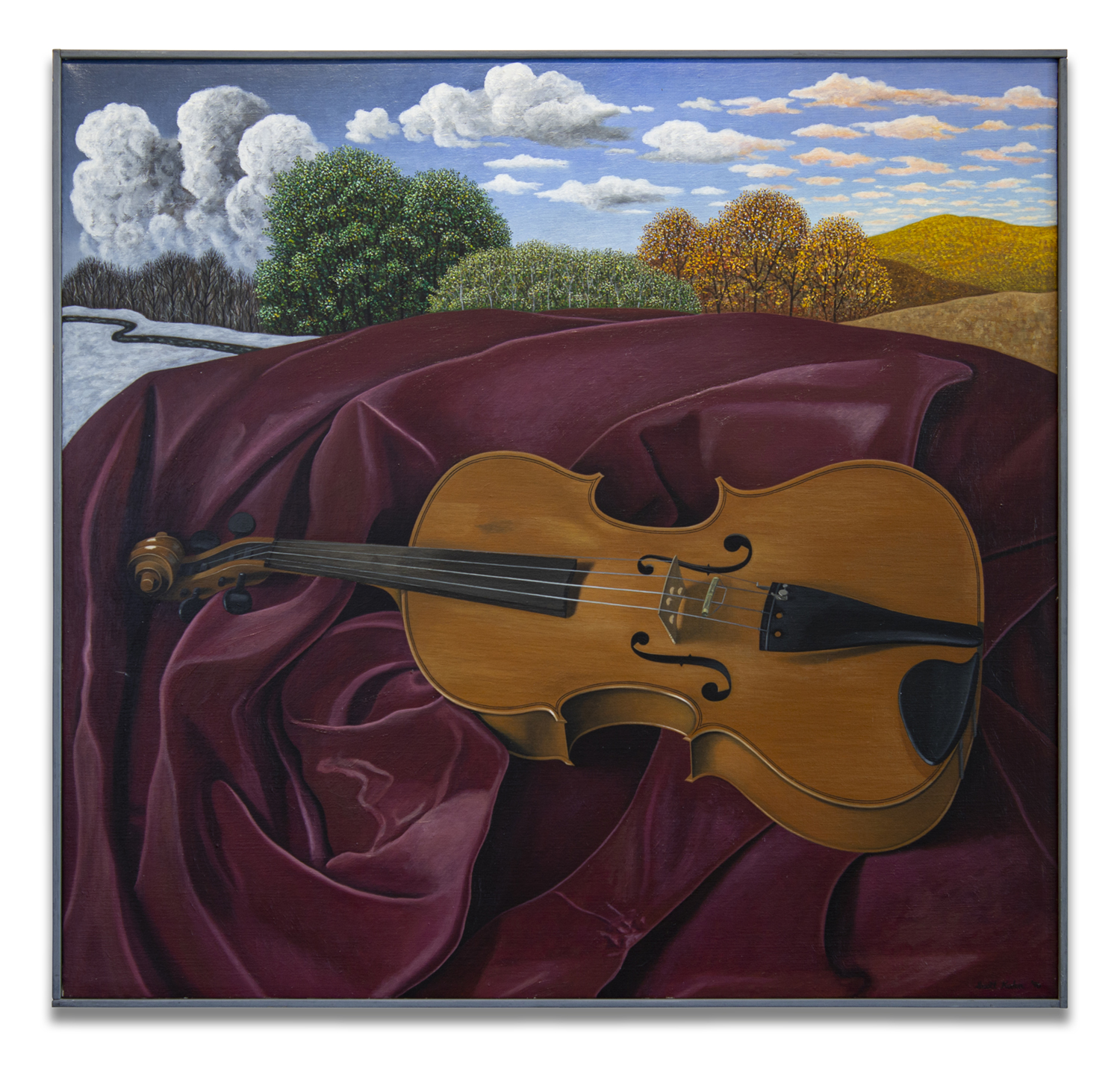 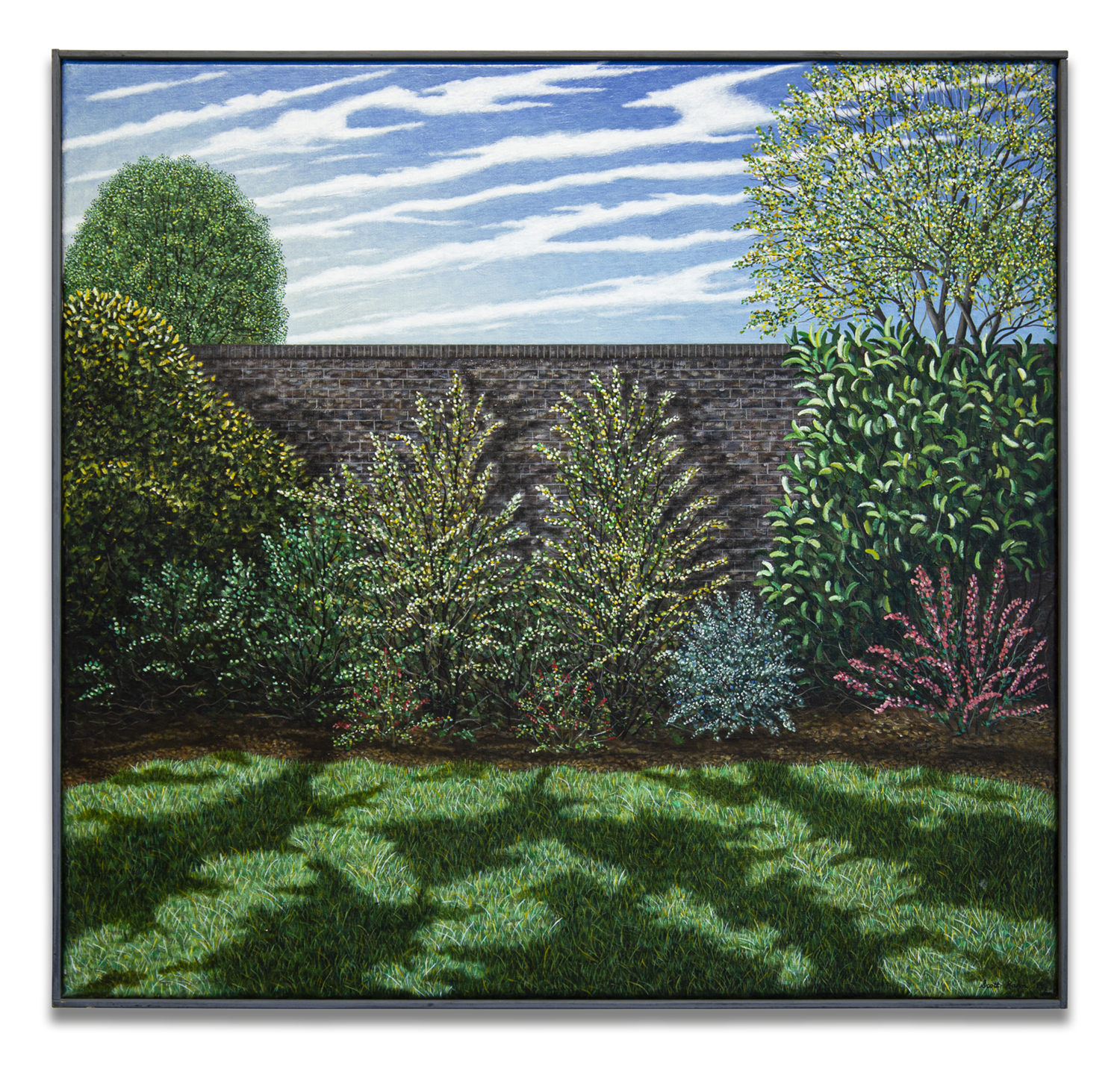 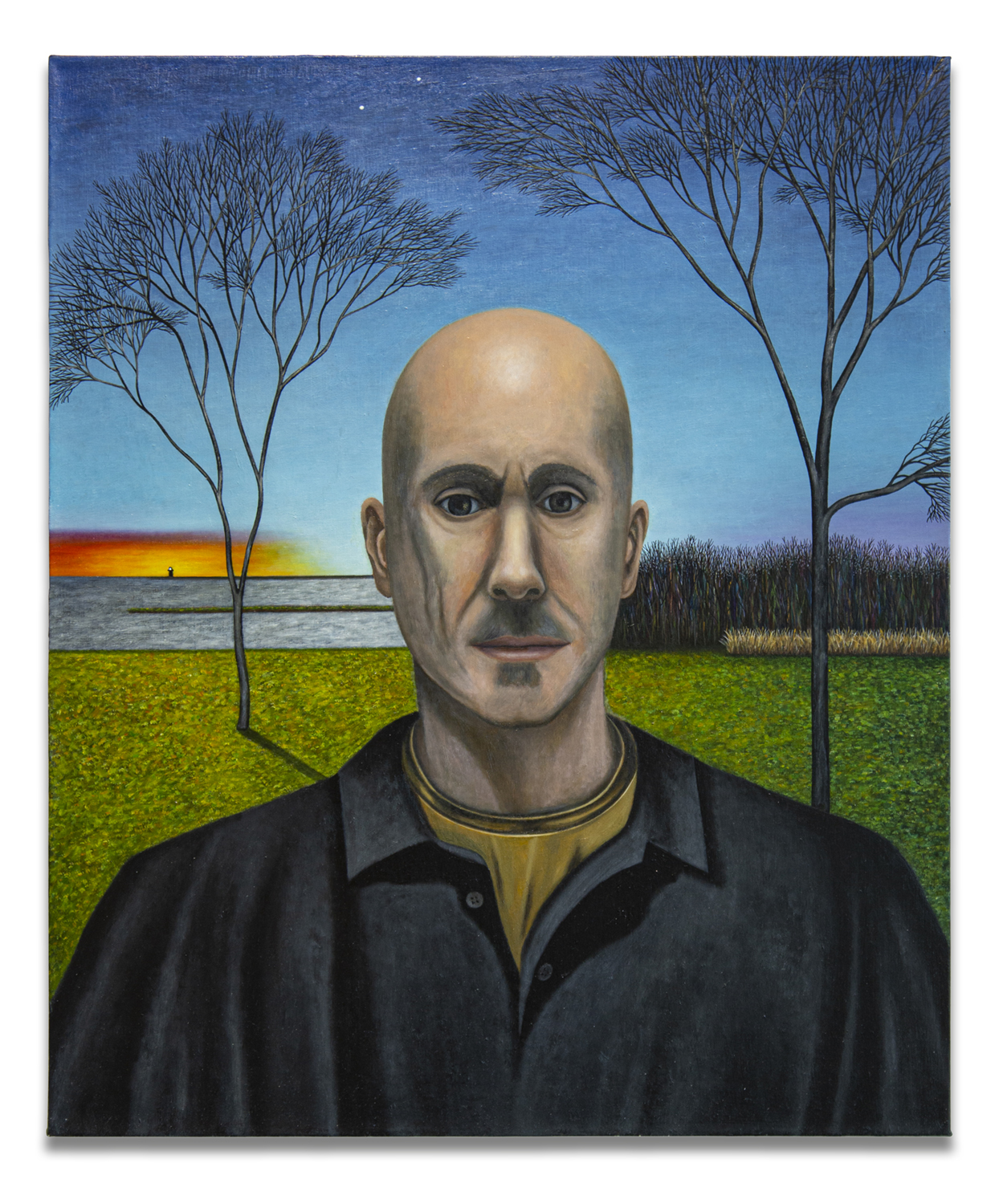 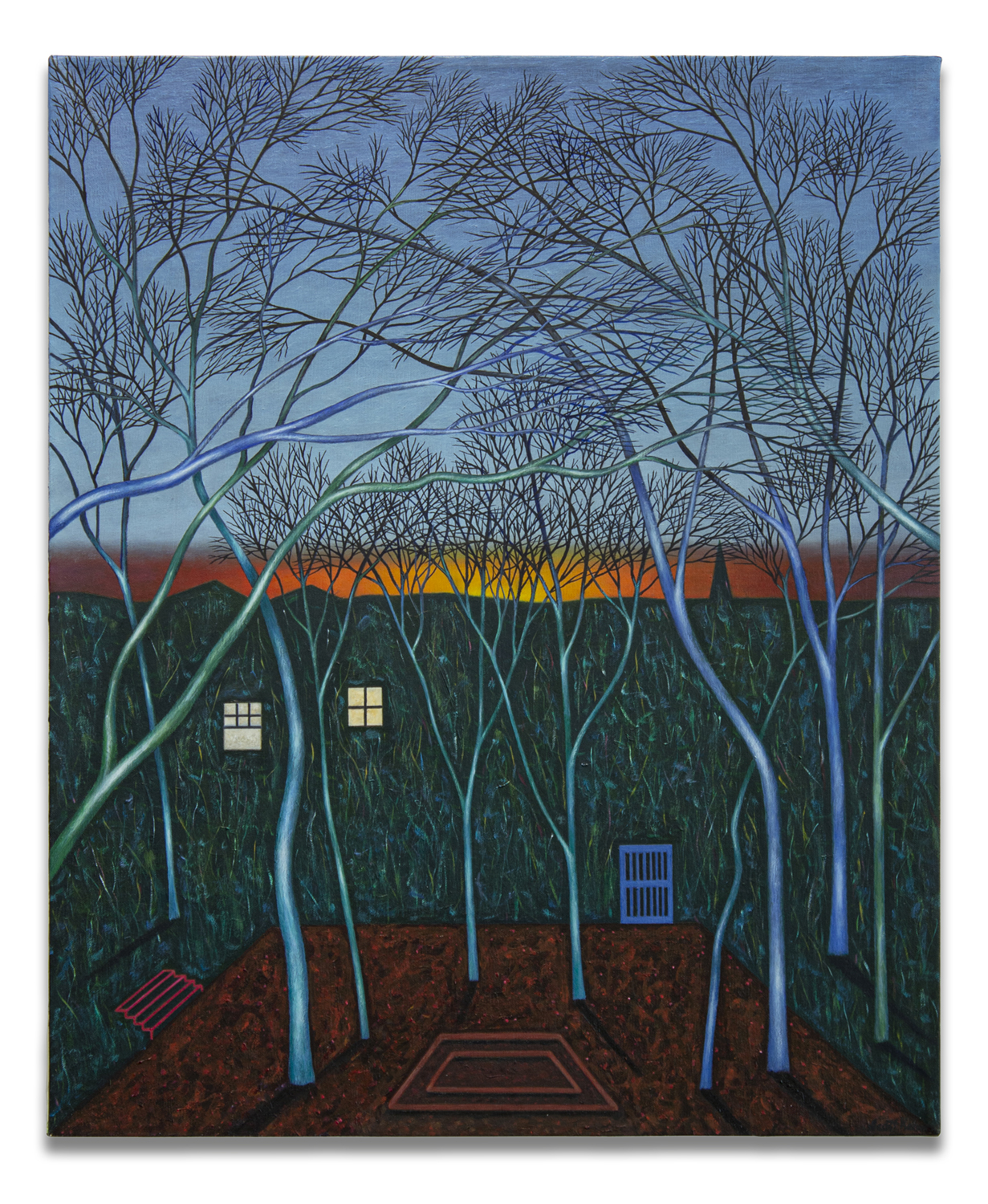 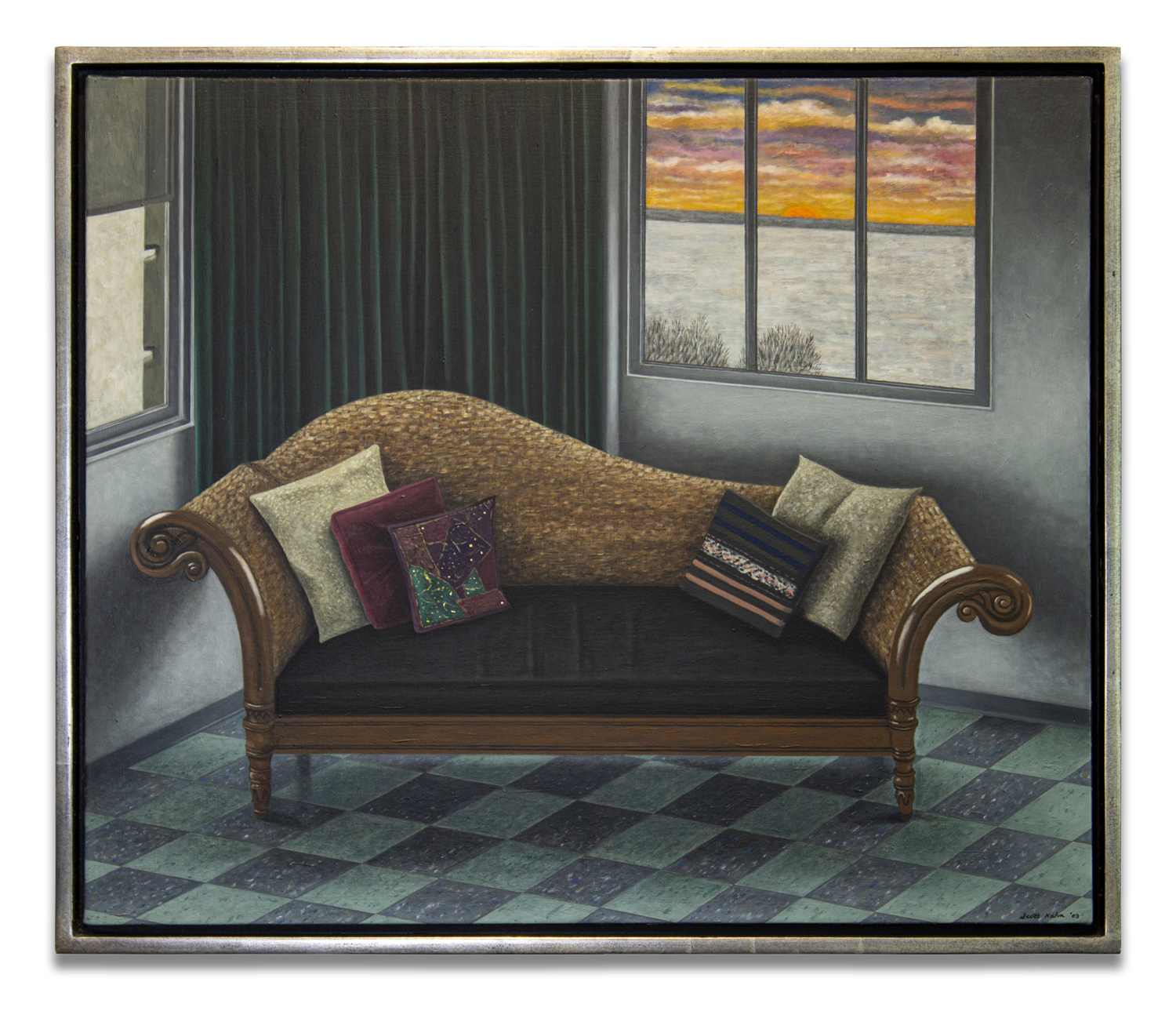 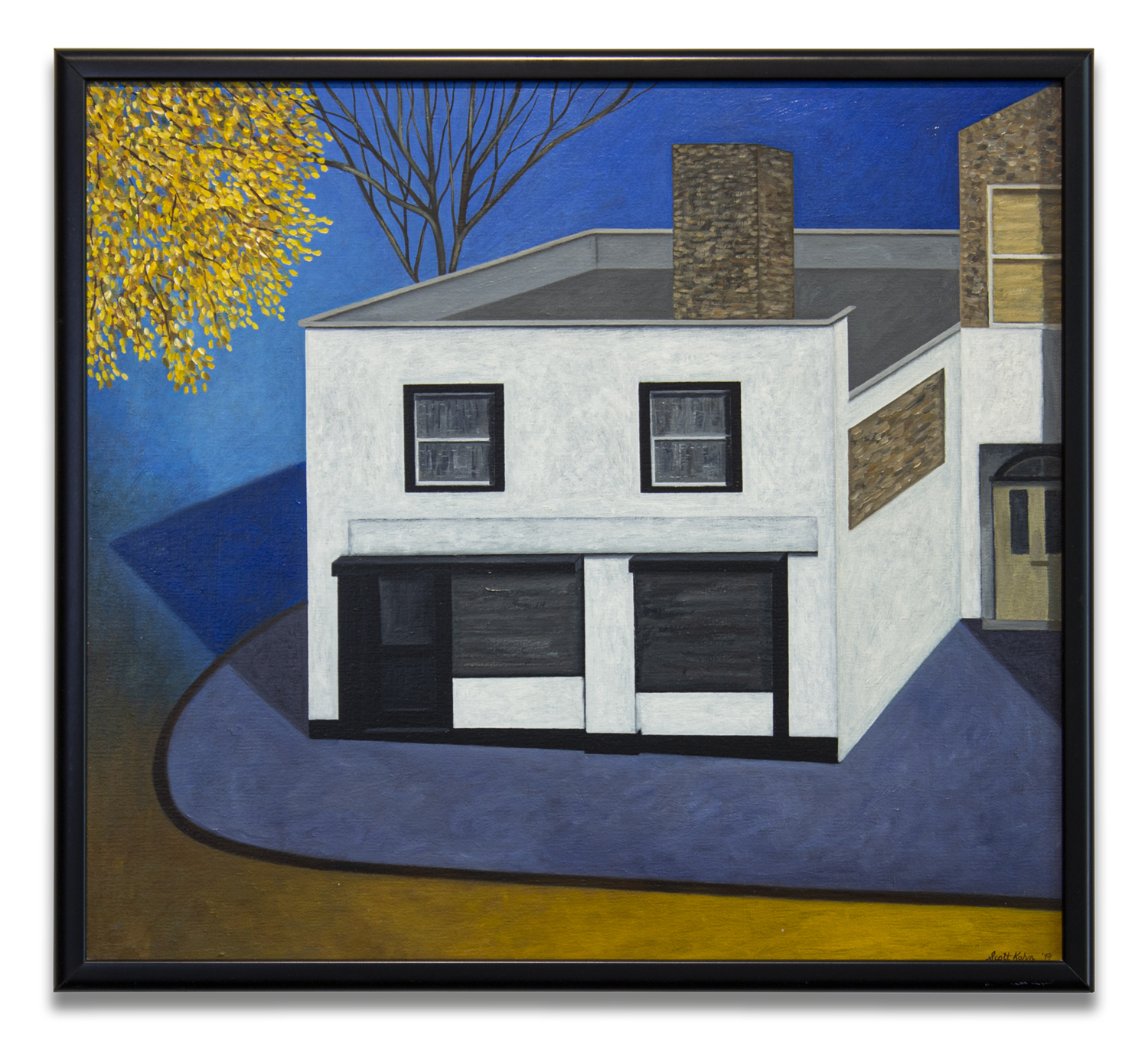 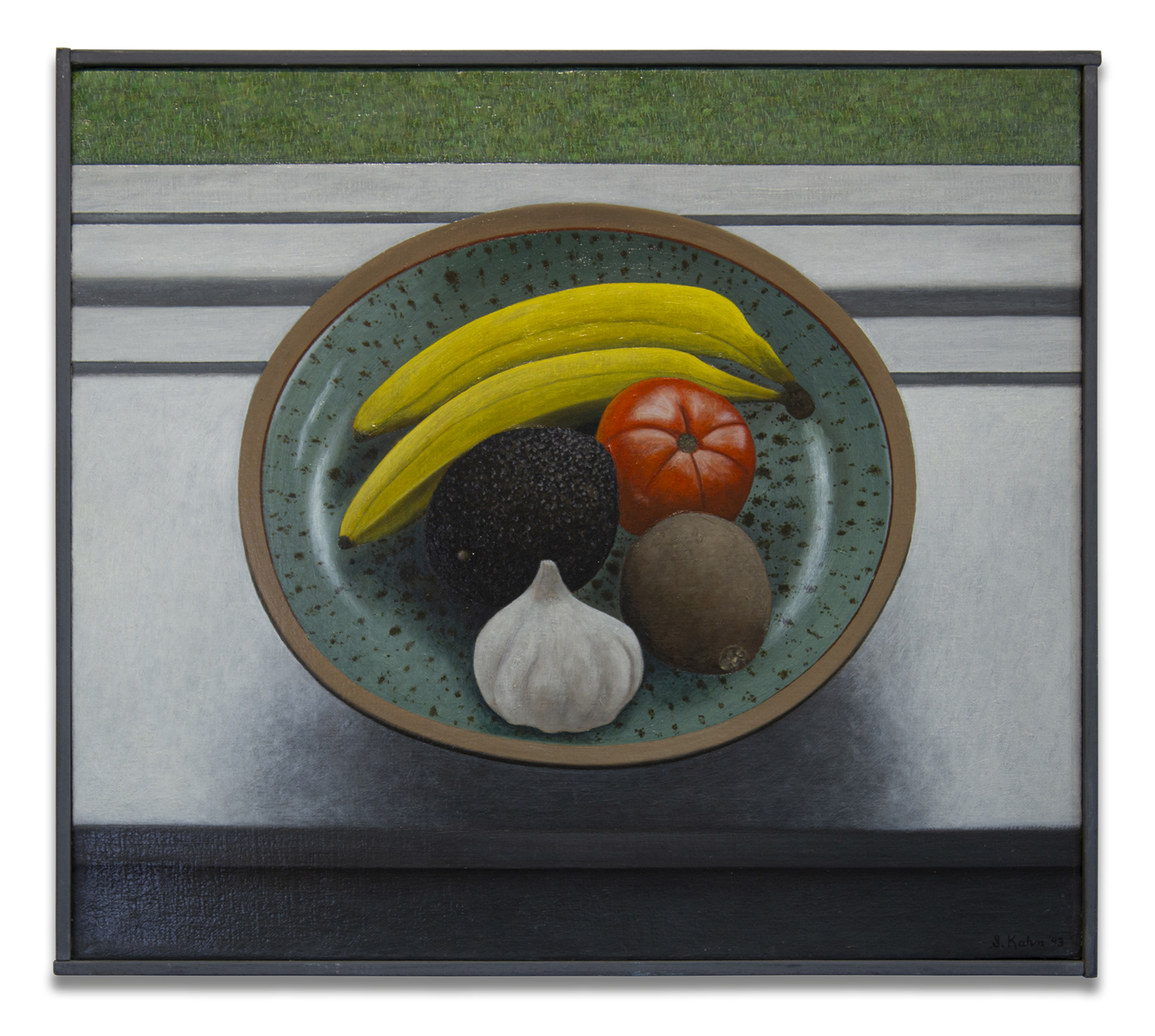 Harper’s Books is pleased to present concurrent solo exhibitions of work by Scott Kahn and Madeleine Bialke: Diary, Continued and Vital Signs. In paintings that are at turns subtle and sublime, Kahn and Bialke revisit the myriad possibilities offered by the landscape genre by infusing quotidian scenes with an otherworldly sensibility. The exhibitions will open on Saturday, June 15 with a reception, attended by the artists, from 6 to 8 pm.

Featuring fourteen works produced over the last three decades, Scott Kahn: Diary, Continued will be installed in the first floor gallery and will highlight the artist’s striking, intricately detailed approach to naturalistic painting. Depicting a sequence of serene moments—shadowy summer lawns, deserted domestic interiors, carefully cultivated gardens—Kahn’s canvases refract familiar scenes through the prism of memory, experience, and emotion. Whereas select landscapes, with their billowing clouds, austere symmetry, and horizontally arrayed bands, resemble hazy snapshots extracted from a dream, others more candidly incorporate the surreal: in Sunset from the Attic II, a dense web of foliage doubles as a building facade, while in Interior, the vivid visions of a sleeper, his limbs outstretched, engulf the walls surrounding him. Wielding an iconography and an aesthetic approach reminiscent of American Regionalism, Kahn merges the interior with the exterior, instilling his settings with a psychological force that is variously understated and overt.

Curated by Jeanne Masel, founder of Art for Change, Madeleine Bialke: Vital Signs, presented in the upstairs gallery, will include seventeen works that grapple with the conventions, history, and legacy of American landscape painting. Drawing upon the genre’s early role as a significant tool for defining national identity, and inspired by figures such as George Catlin and Albert Bierstadt, Bialke’s imagery establishes an alternate vision of the natural world, increasingly under the threat of global warming and environmental disaster. Flattened planes of sky, ground, and greenery, articulated in acidic and neon hues, form an uncanny backdrop for the herds of mammals that amble through it. Elsewhere, cartoonish trees, grids, and gradients suggest a hybrid reality composed of natural and digital elements, culminating in an enigmatic, otherworldly image of our ever-changing shared environment. A portion of the proceeds from this exhibition will support the Natural Resources Defense Council (NRDC), a nonprofit international advocacy group that works to address the challenges of climate change.

Scott Kahn received his BA from the University of Pennsylvania in 1967 and his MFA from Rutgers University in 1970. He has been awarded grants from the Pollock-Krasner Foundation and has taken part in residencies and retreats at the Albee Foundation, Montauk; and the Mosaic Colony, Southampton. For 25 years Kahn was represented by Katharina Rich Perlow Gallery, where his work was featured in seven solo exhibitions and numerous group shows. Additionally, he has participated in various group and solo presentations, most recently at Nicelle Beauchene Gallery, New York (2019); Alexey von Schlippe Gallery, Groton, Connecticut (2012); Reef Gallery, Key Largo, Florida (2009); and Diane Birdsall Gallery, Old Lyme, Connecticut (2009); among other venues. Kahn is currently based in New Rochelle, New York.