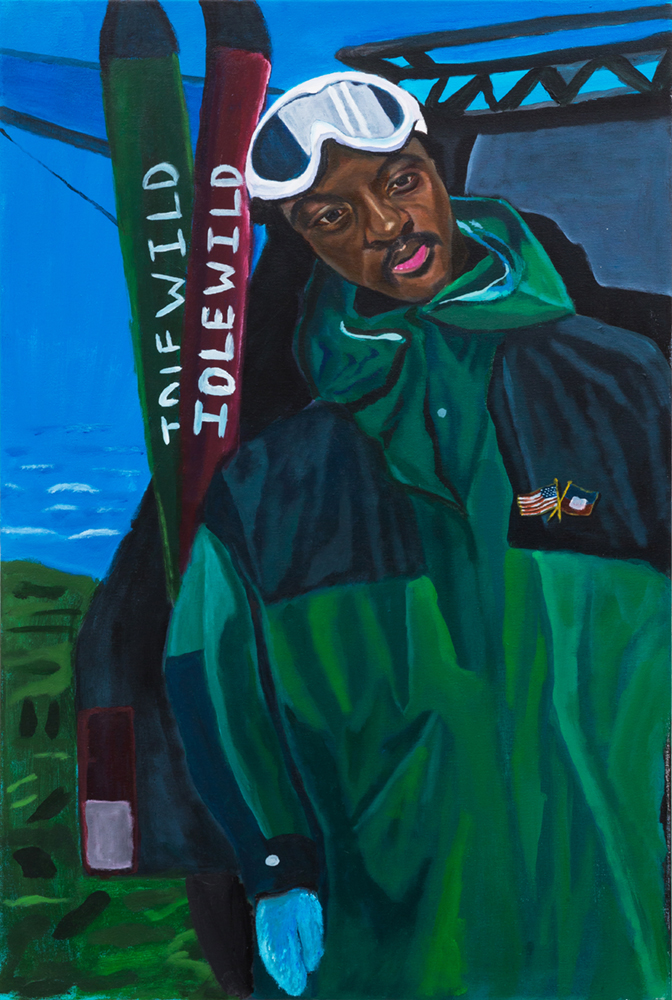 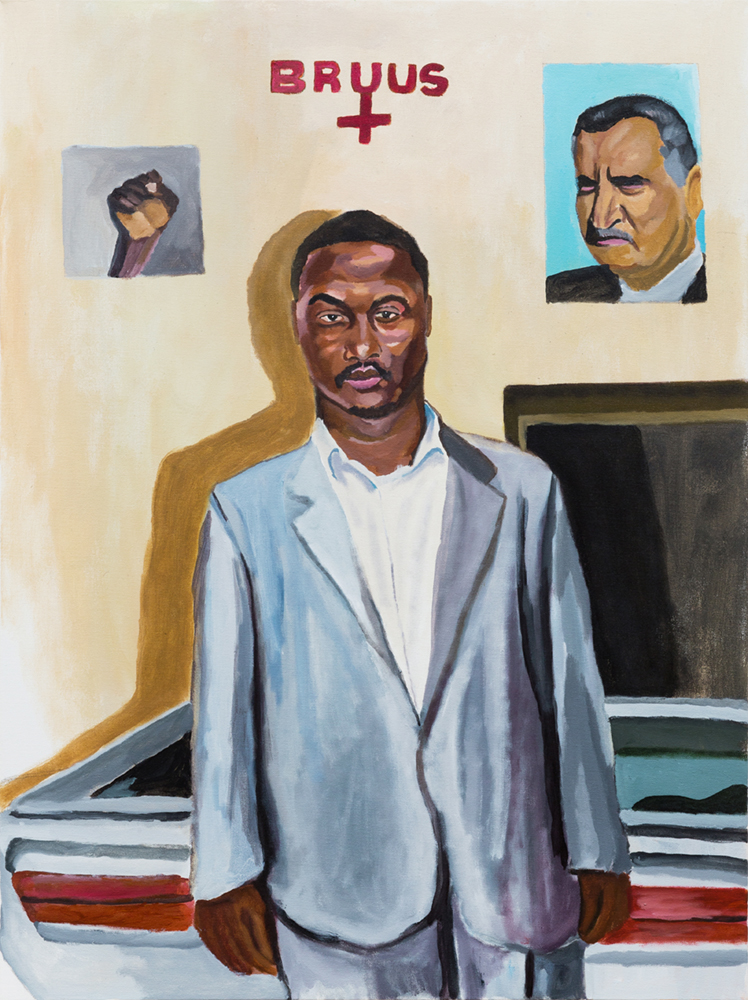 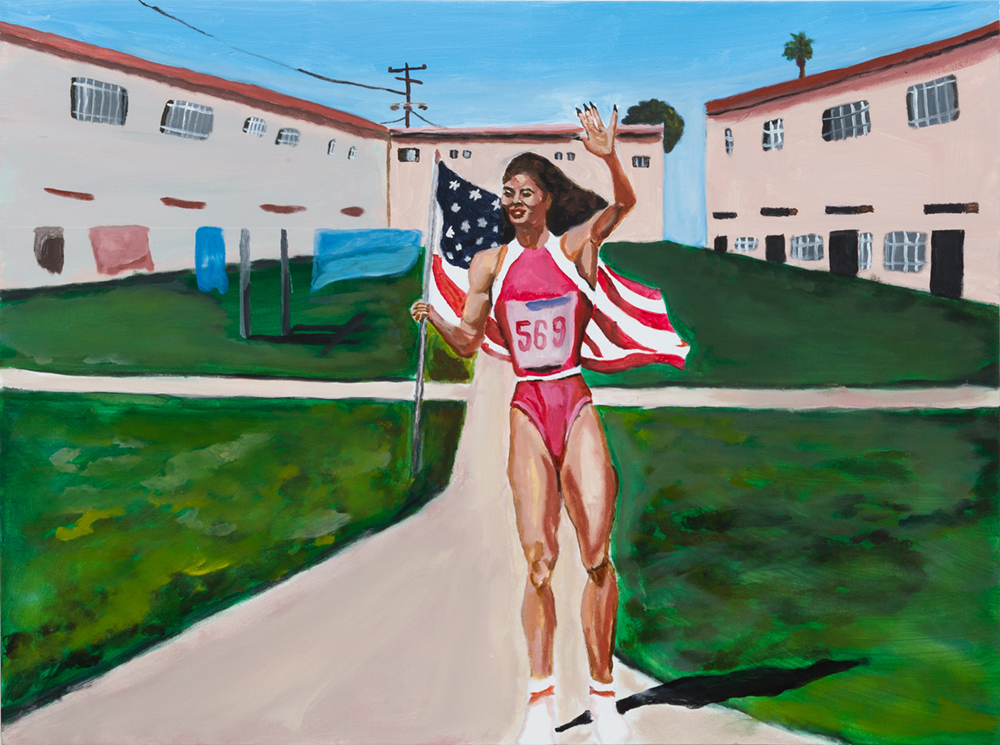 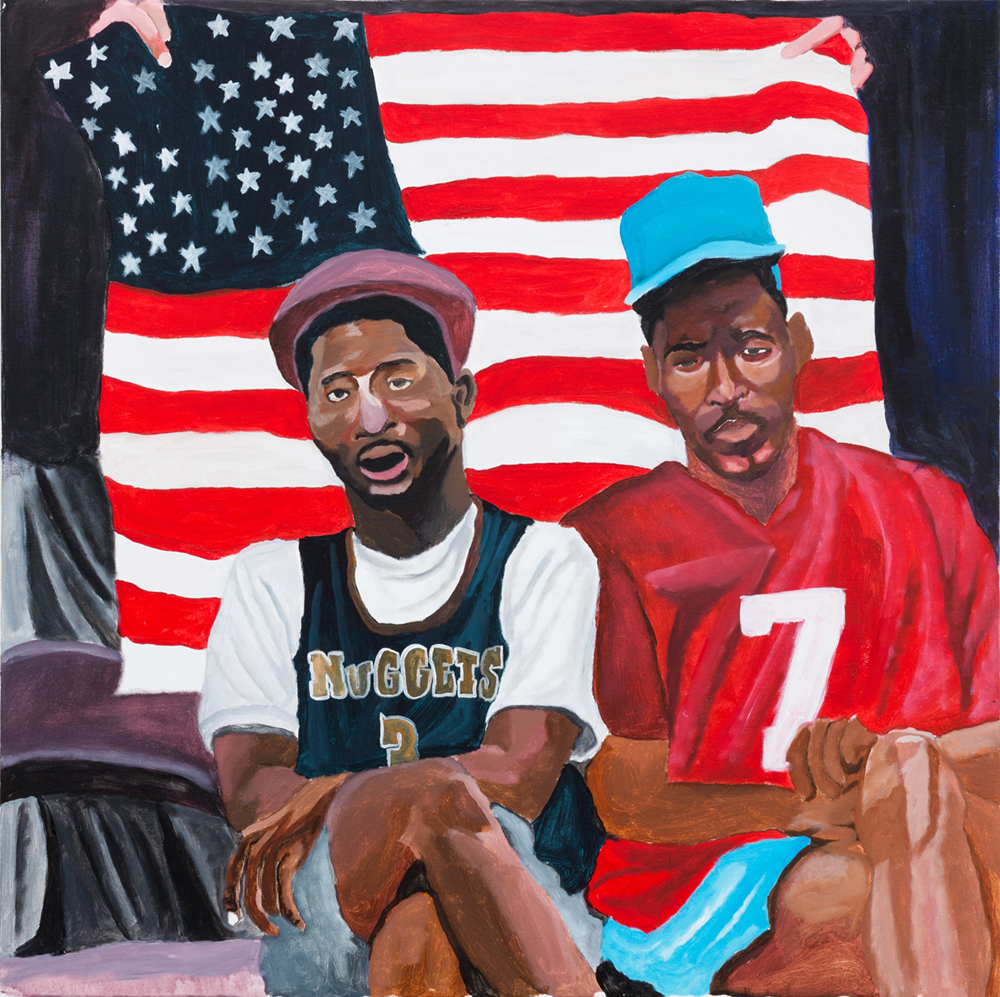 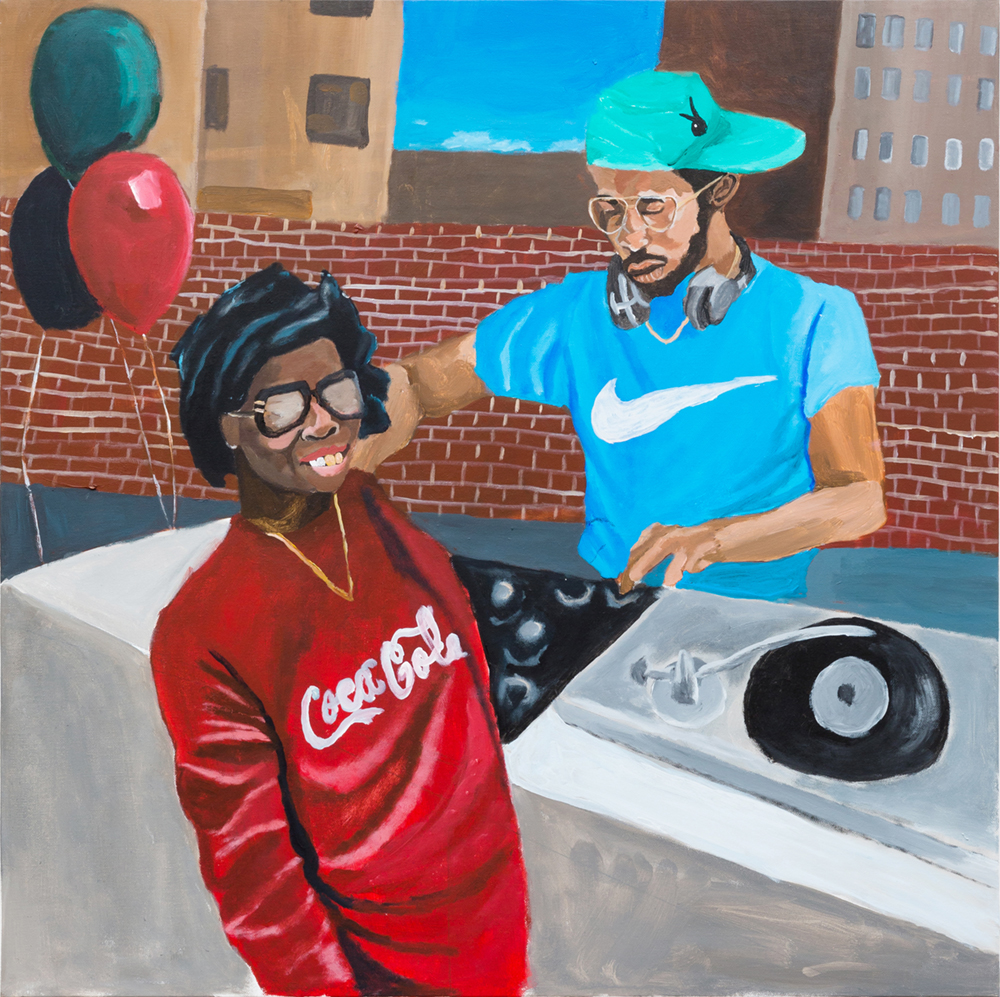 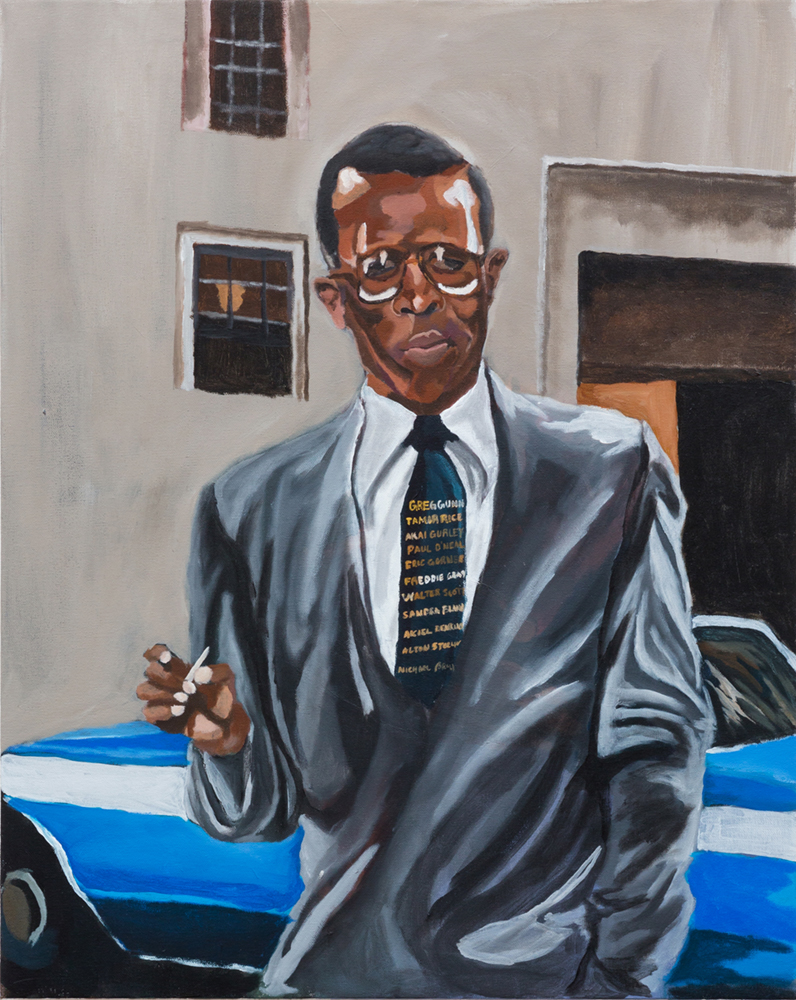 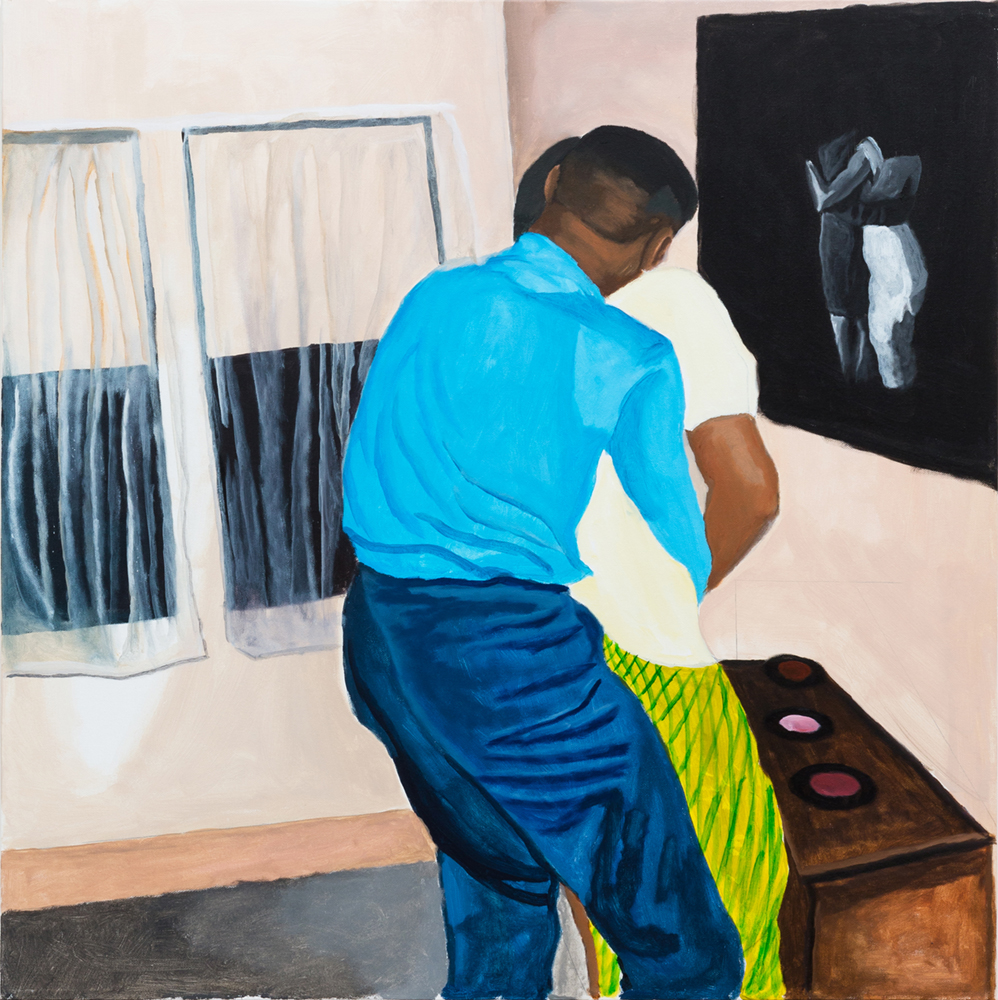 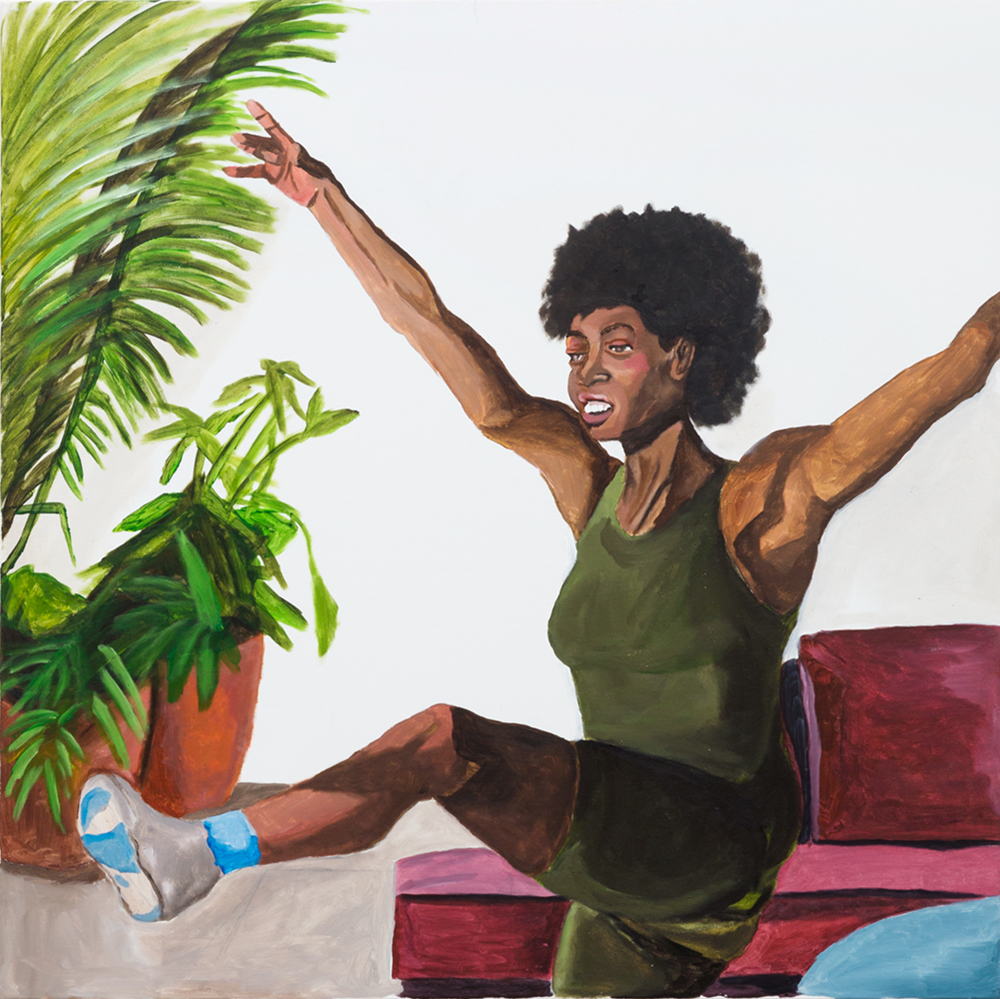 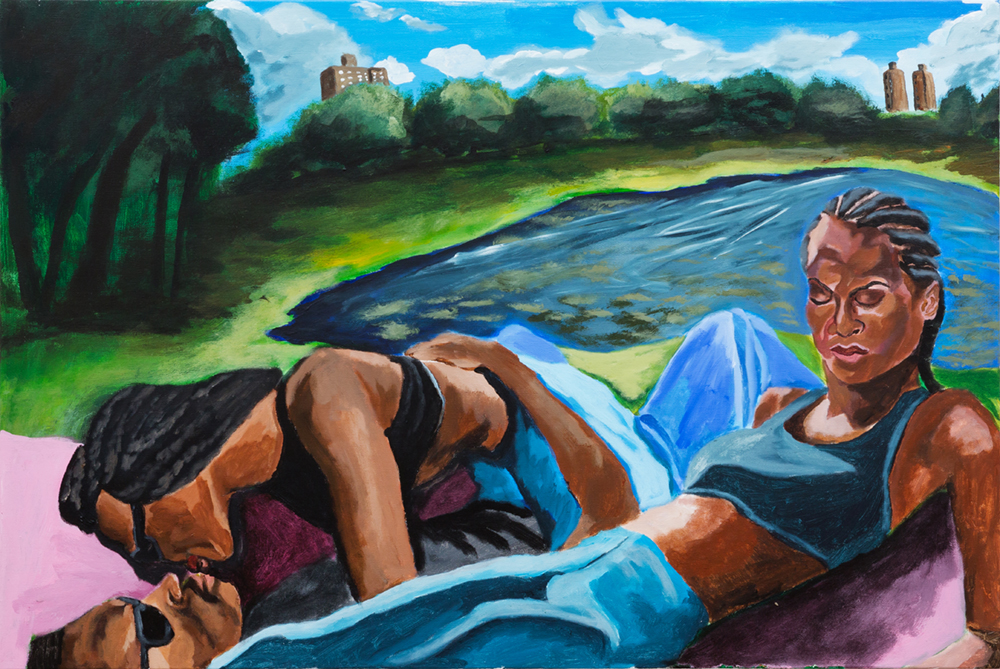 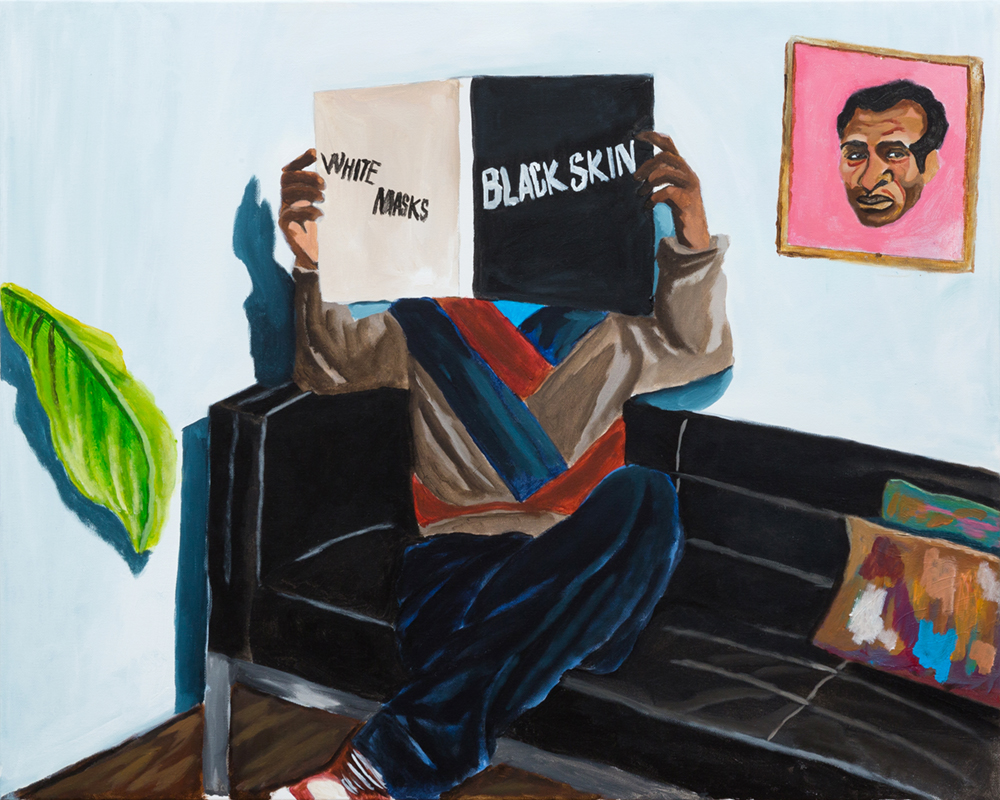 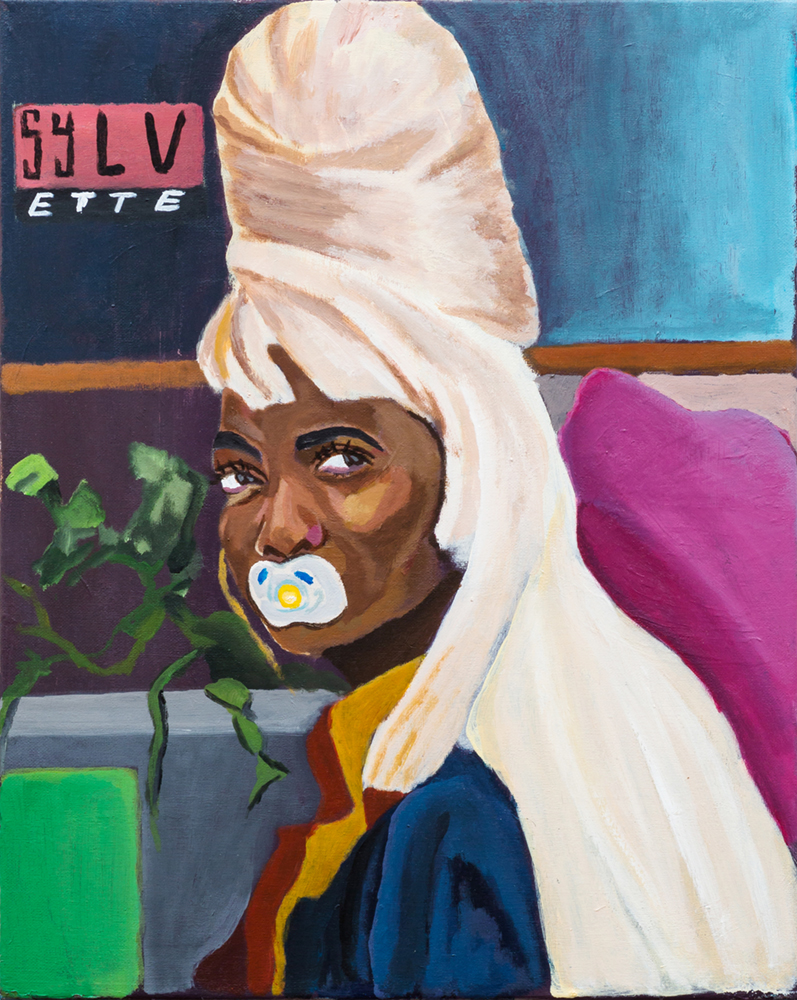 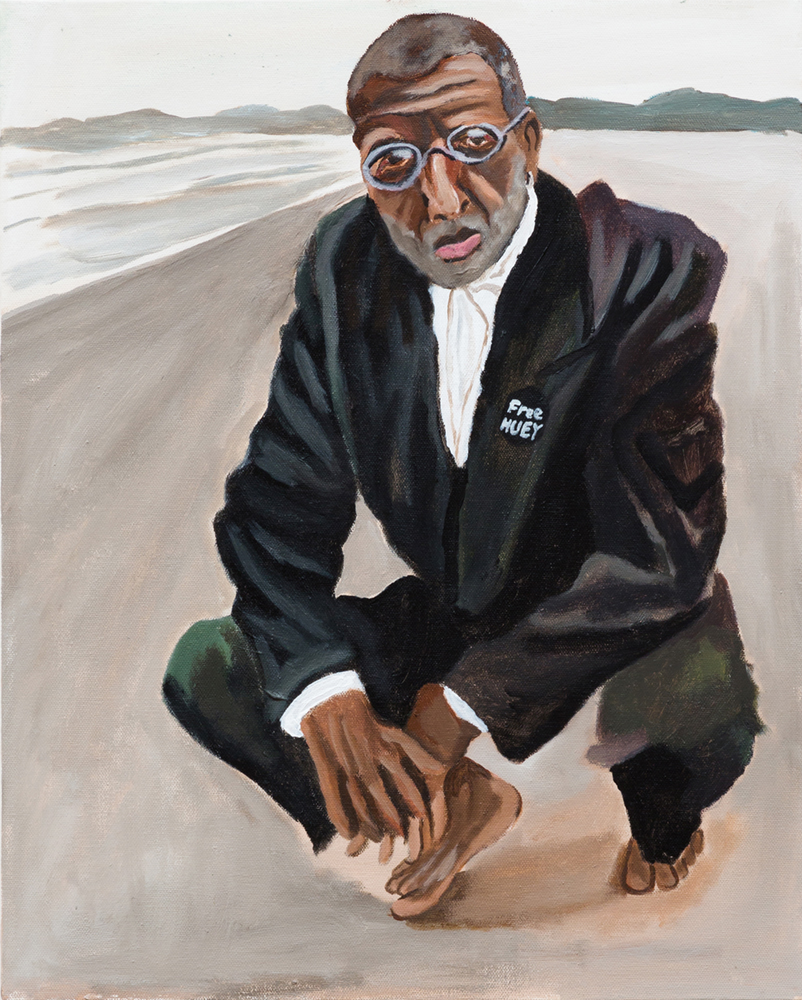 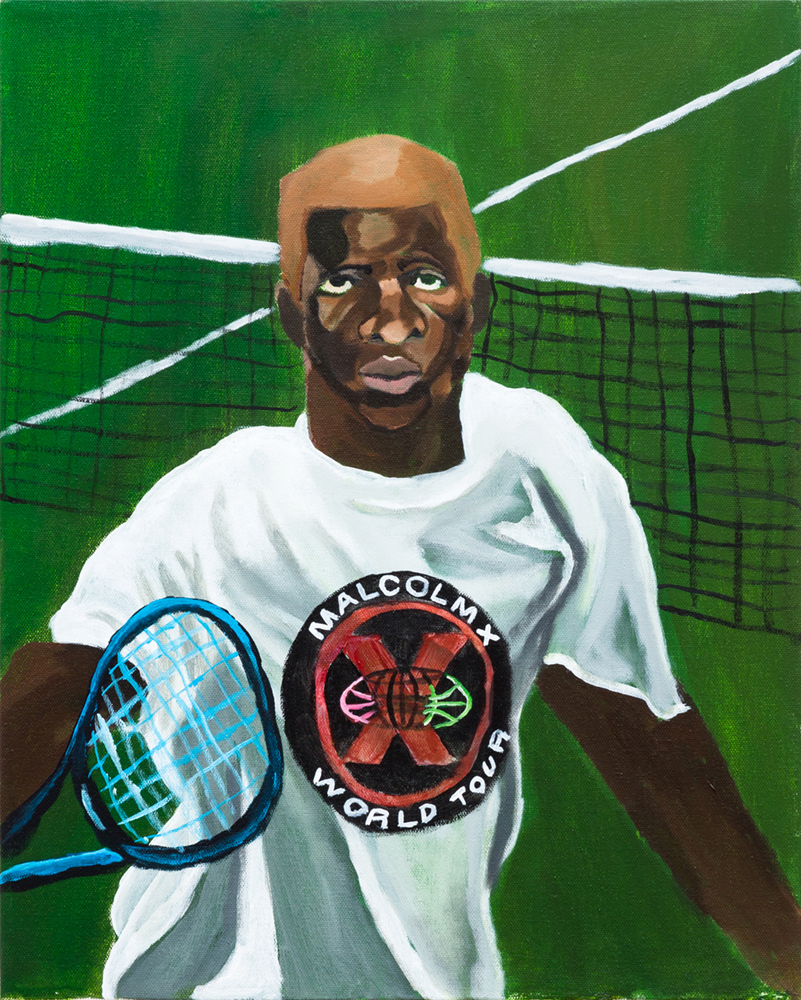 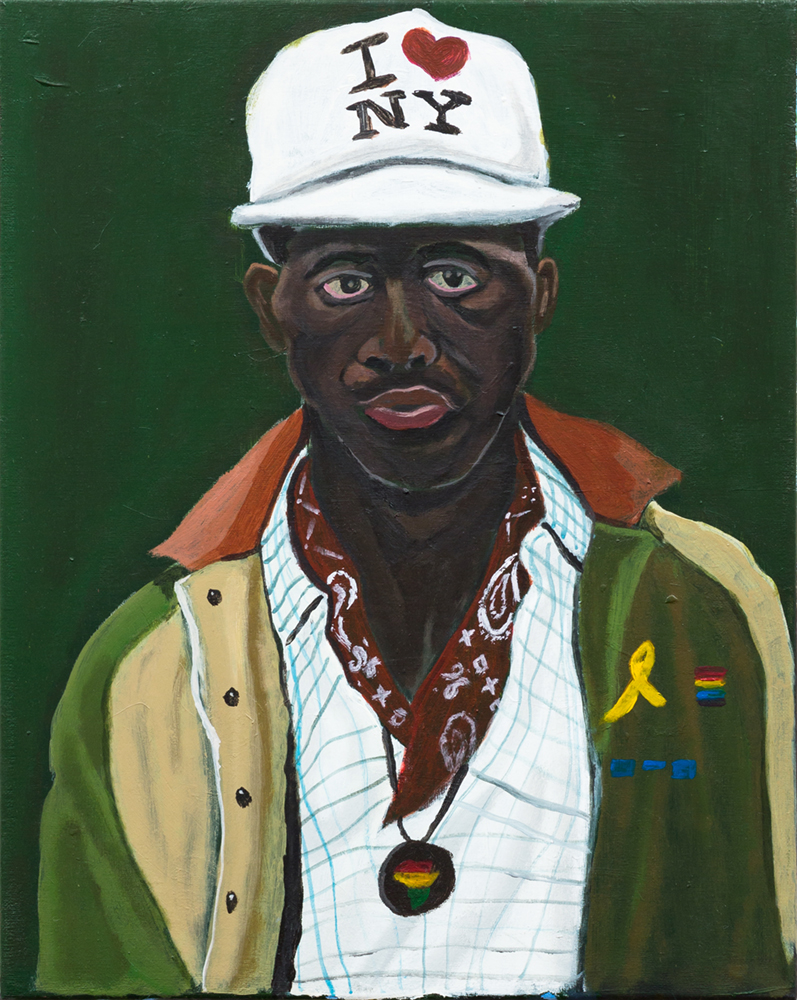 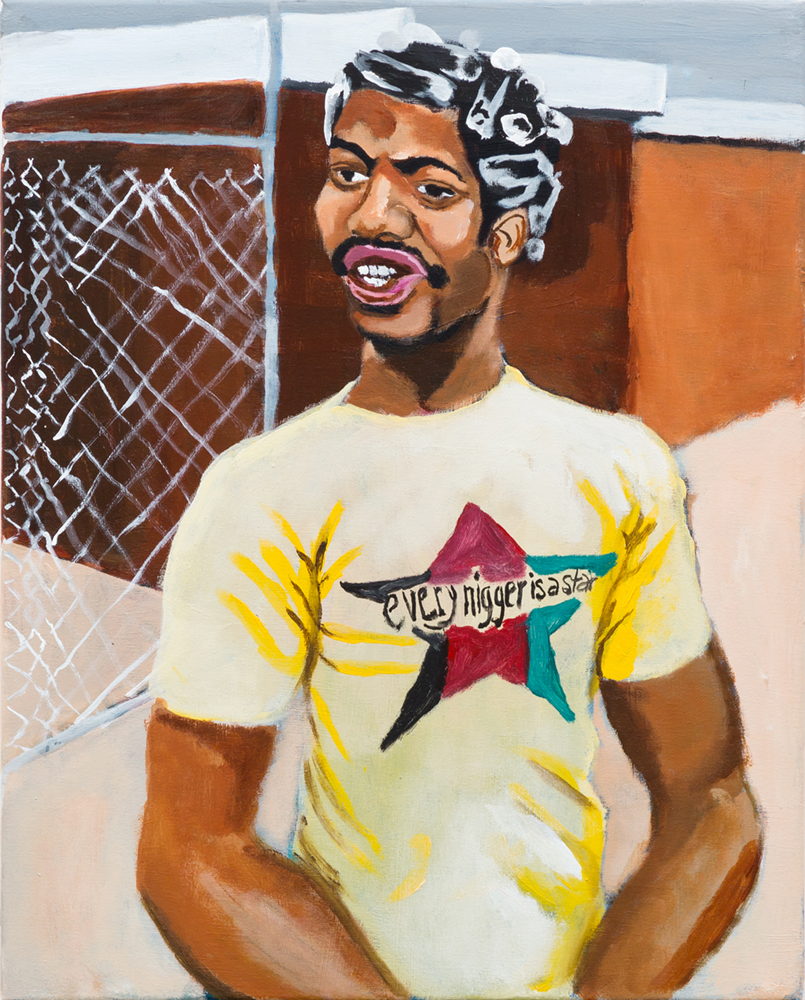 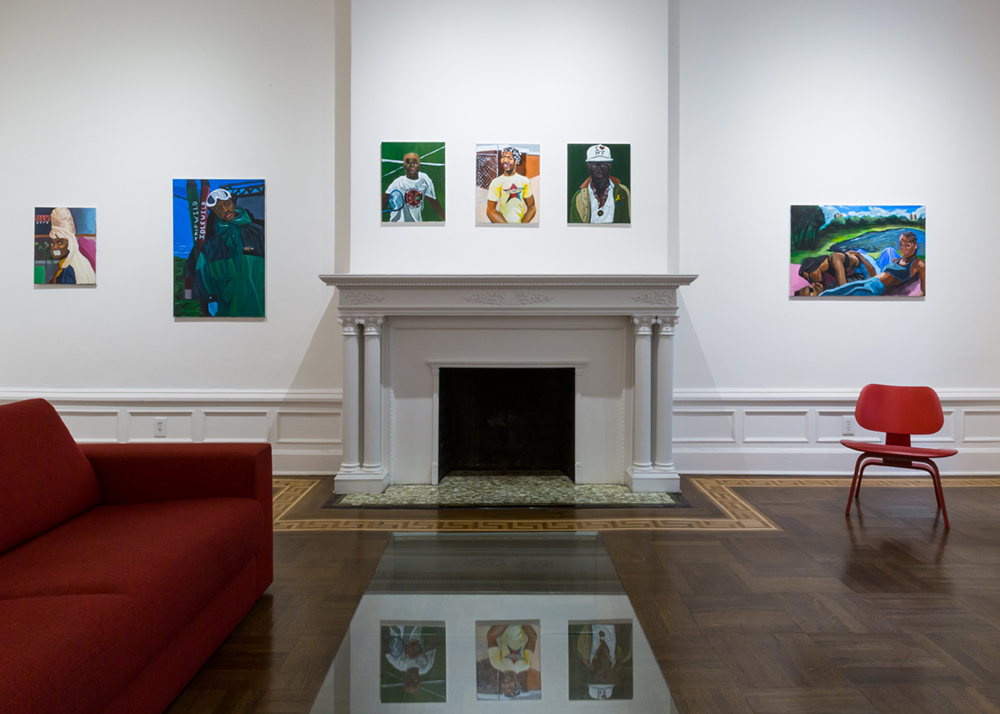 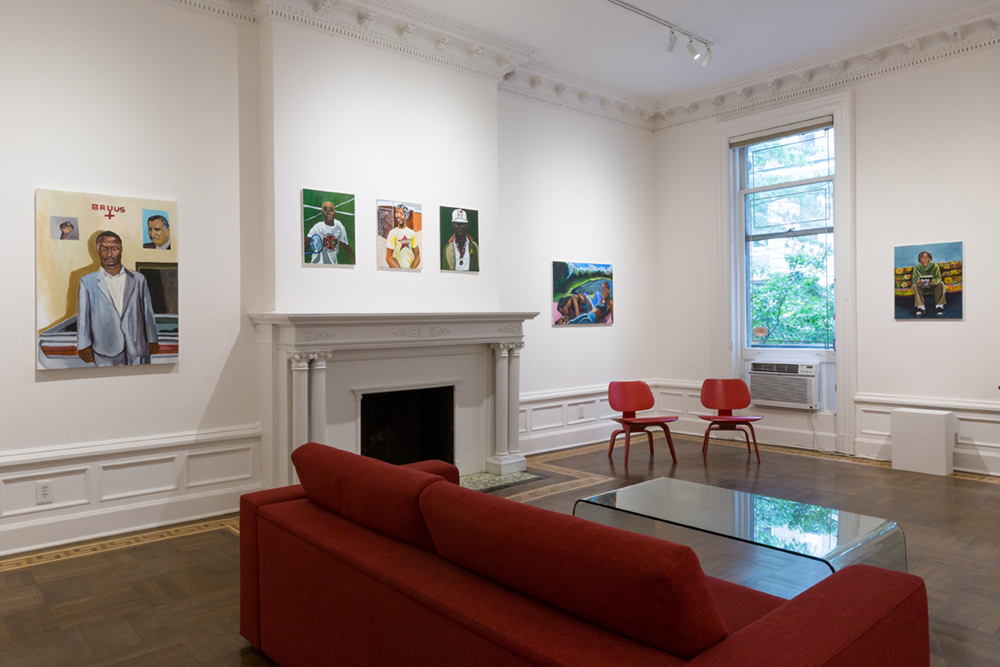 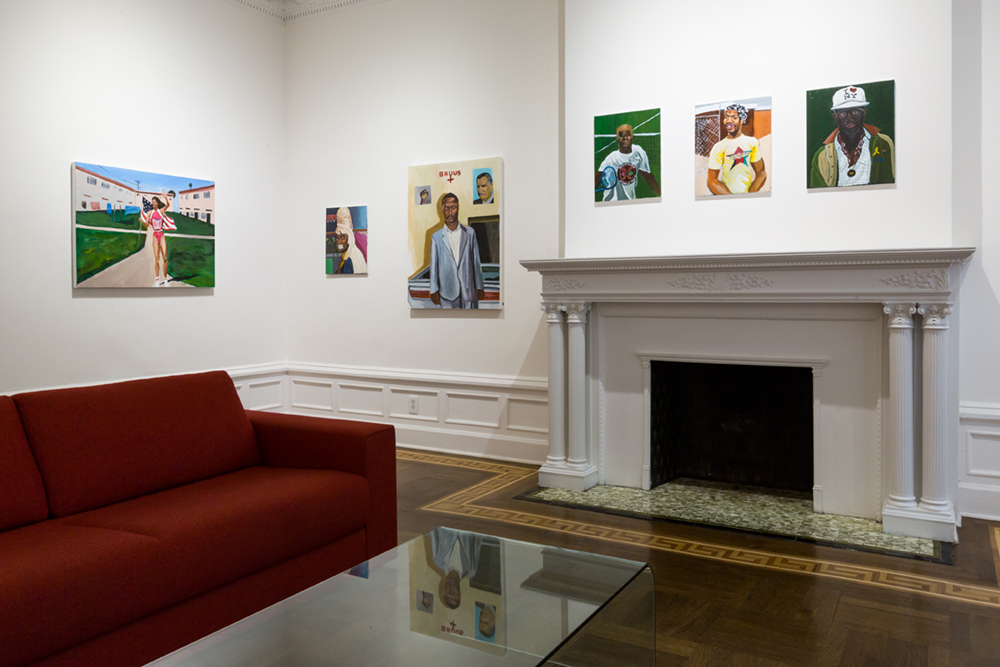 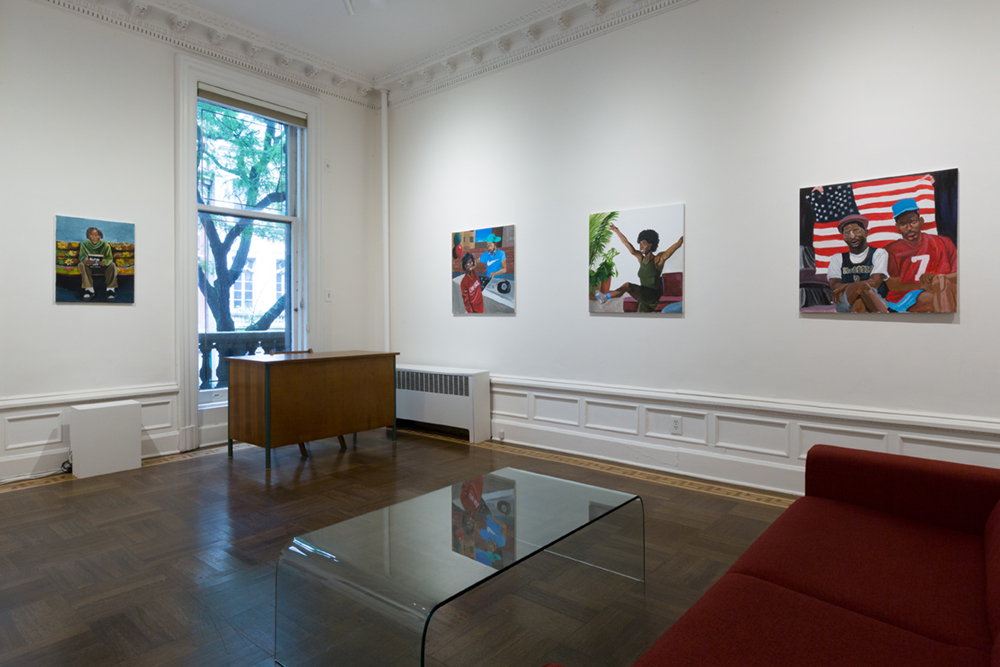 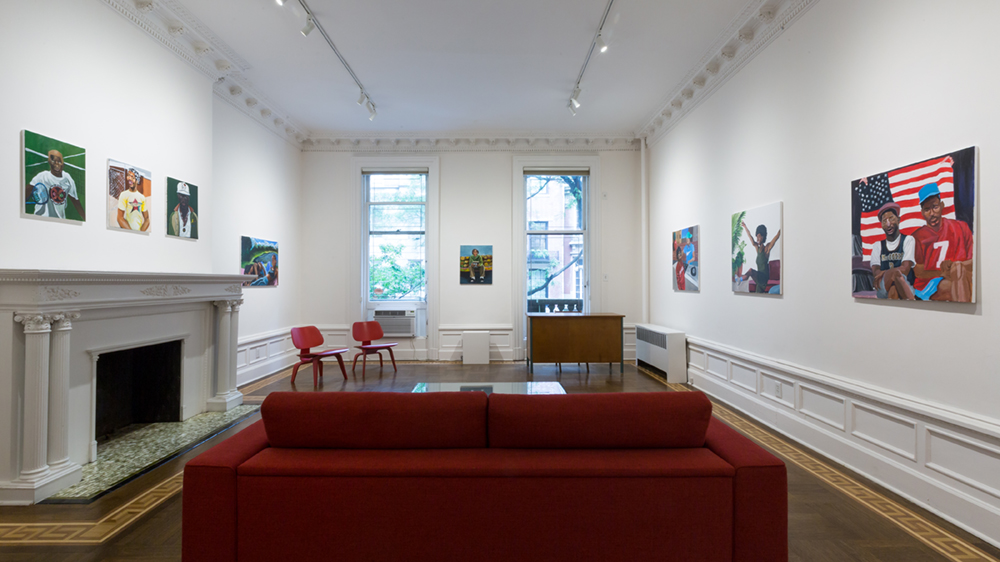 Harper’s Books is pleased to announce Marcus Brutus: The Uhmericans, the artist’s debut solo exhibition. Comprising a selection of fifteen acrylic paintings on canvas, this show will underscore Brutus’s examination of black American identity and contemporary civil rights struggles through figuration. The Uhmericans will open with a reception, attended by the artist, on Wednesday, September 12, 2018.

Documenting a sequence of characters, lone and paired, upright and prostrate, in-motion and still, Brutus’s paintings explore, in the artist’s words, “ideas of power through portraiture.” Fluidly interweaving subtle and overt references to Kathleen Collins, Angela Davis, Roy DeCarava, Frantz Fanon, and Nikki Giovanni, among other historical and contemporary figures, the paintings on view consider, more precisely, “the power of a black subject to define their own culture, standards of beauty, heroes, and identity.” For Brutus, these acts of self-representation and self-determination—embodied in sartorial choices, gestures, and tributes—serve as vital strategies for confronting the psychological trauma of structural racism and “the internalization and reproduction of racist attitudes by racial minorities.”

While the thoughtfully placed allusions strewn throughout Brutus’s work point to these issues, they coalesce, most clearly, in his carefully constructed subjects. Foreign, a painting jointly inspired by the 1990 film Fierrot le Pou and contemporary hip-hop’s fixation with exoticism, tackles this theme through its female protagonist, whose natural hairstyle and unisex attire offer alternatives to white feminine beauty conventions. Across the portraits on view, signifiers of self-empowerment are juxtaposed with references to racial terrorism: While the woman’s blue shirt commemorates Nia Wilson, the Oakland teen who was violently murdered in a racially motivated attack, the defiant figure in Enough is Enough wears a tie emblazoned with the names of recent victims of police brutality. In the show’s eponymous painting, The Uhmericans, two peacefully seated men sport the jerseys of athletes Mahmoud Abdul-Rauf and Colin Kaepernick—who were publicly chastised after refusing to stand or kneel during the national anthem to protest white supremacy—while a pair of pale-pink hands holds up the American flag behind them.

The backdrops—segmented by blocks of saturated color and dynamically askew lines—and the roughly hewn, softly blended patches of pigment reinforce the rawness and emotional intensity of Brutus’s subjects. Drawing inspiration from diverse source materials culled from the realms of fashion, film, music, photography, art, and politics, his paintings likewise collapse discrete references to distinct eras, cohering past and present contexts. I Love You, Hasta la Victoria, for instance, alludes to the romance between Soledad Brothers member George Jackson and Angela Davis, and the love letters that were used to implicate Davis in Jackson’s crimes. By tethering these events together, and highlighting the impact of external circumstance on personal fulfillment, Brutus’s work maintains the enduring relevance of past struggles to our current American context. Replacing the “A” with the ambivalent and searching “Uh,” the title The Uhmericans gestures toward such ongoing dilemmas, recalling James Baldwin’s avowal of national critique as a vital act that is urgent now as ever.

Marcus Brutus is a Maryland-based, self-taught artist, who currently resides outside of Washington, DC. He holds a bachelor of science degree from St. John’s University in Queens, New York, and has previously worked in public relations positions in the fashion industry. His paintings were presented publicly for the first time during the Upstairs Art Fair in Amagansett, New York, in July 2018.