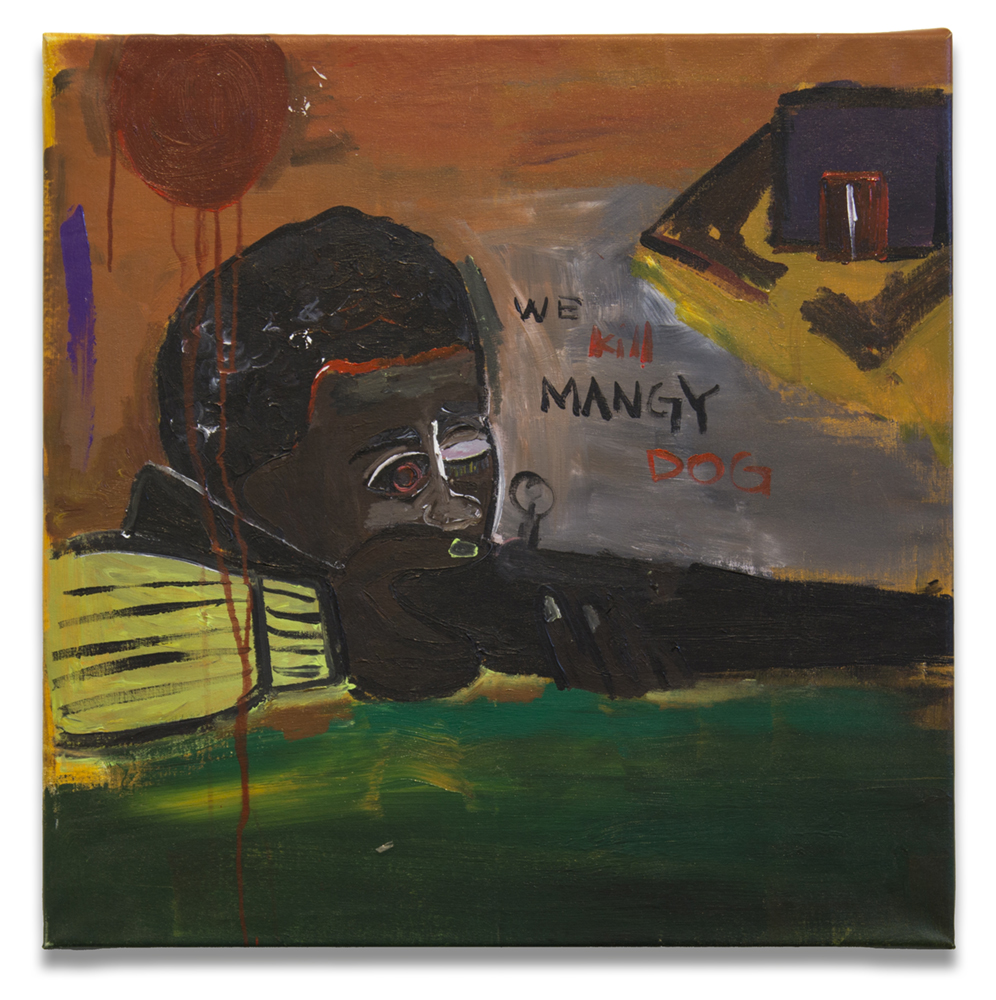 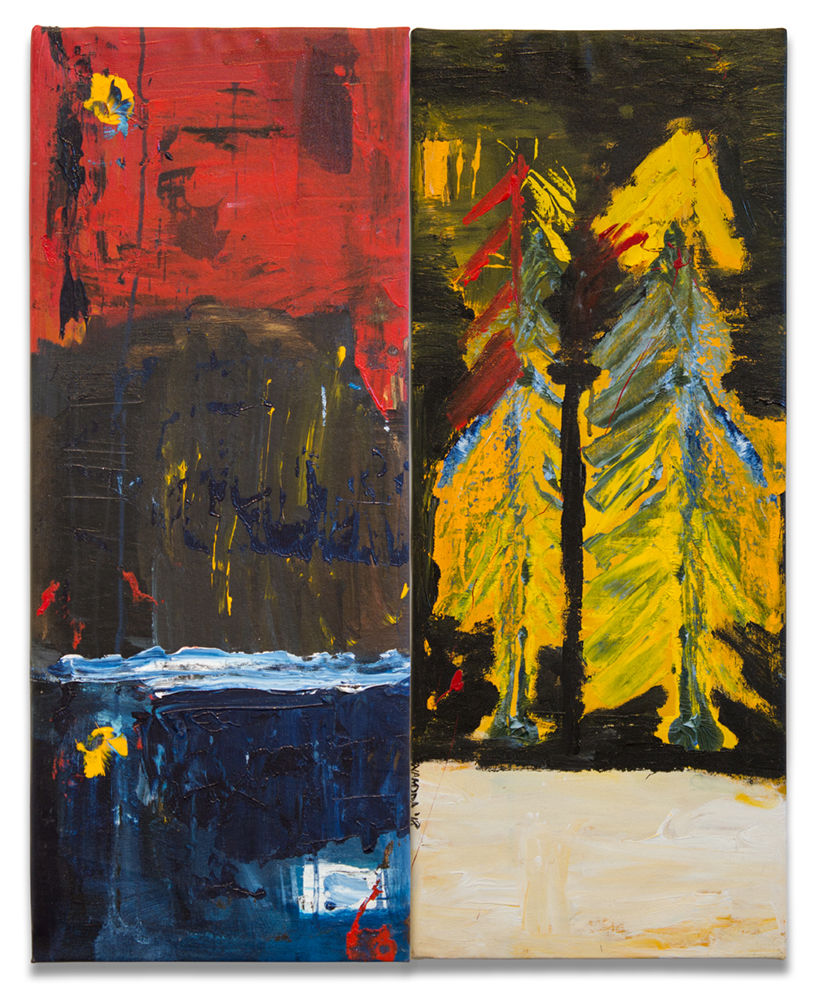 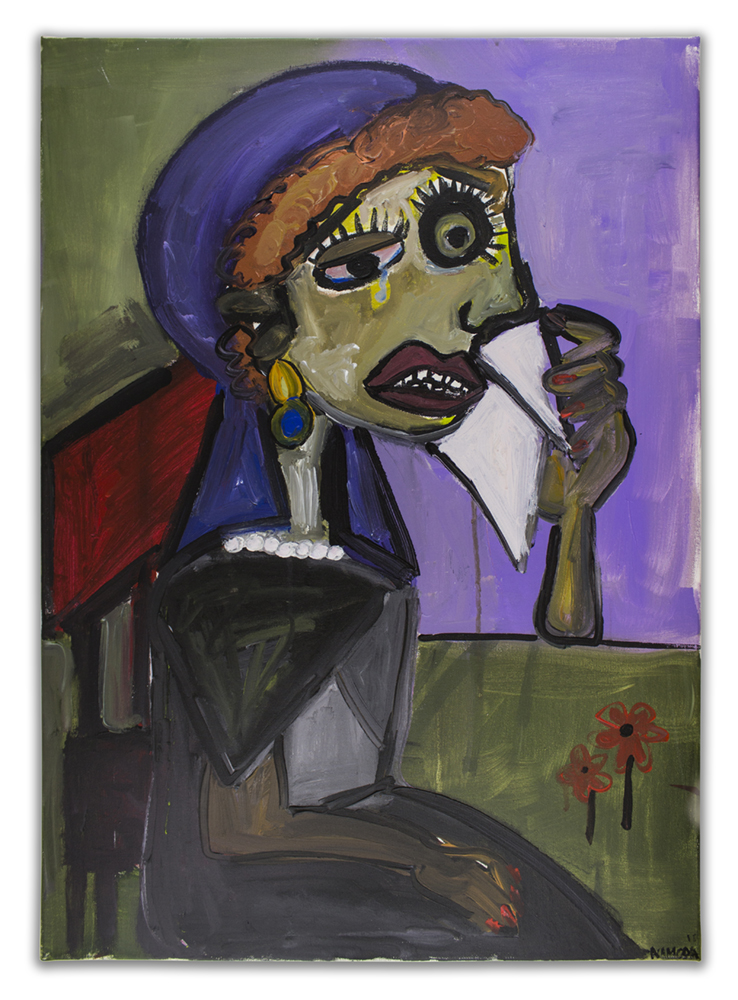 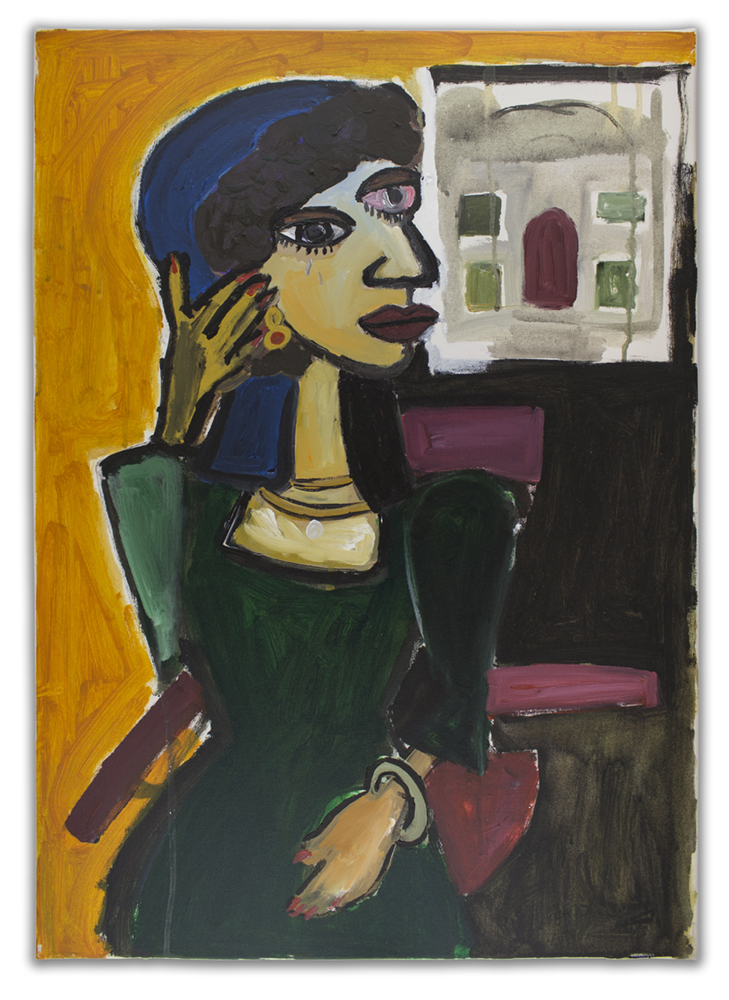 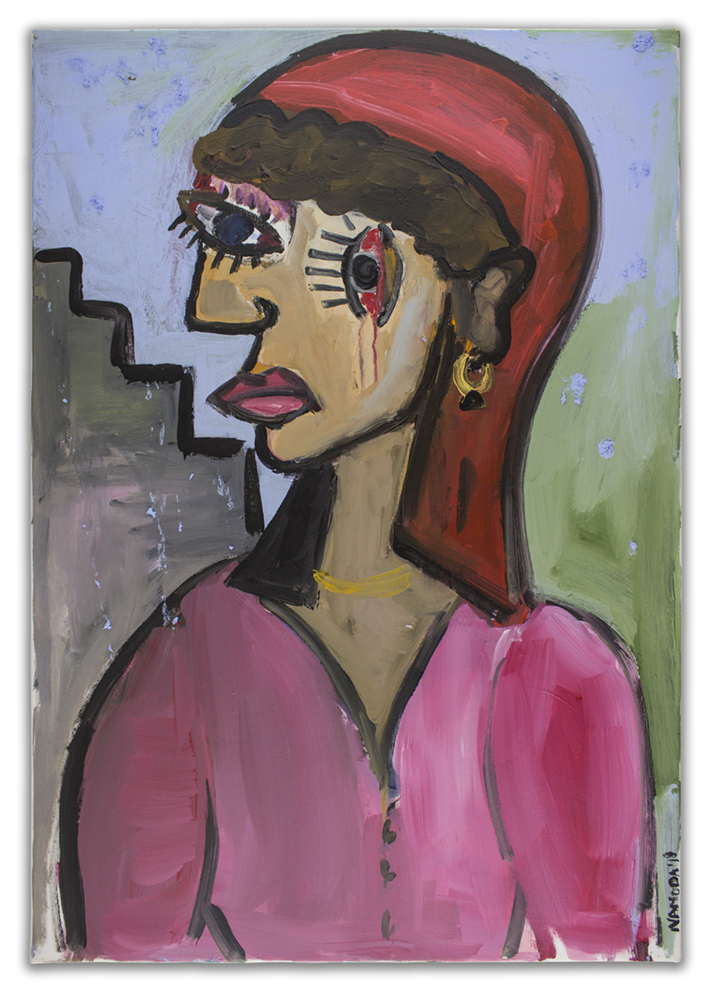 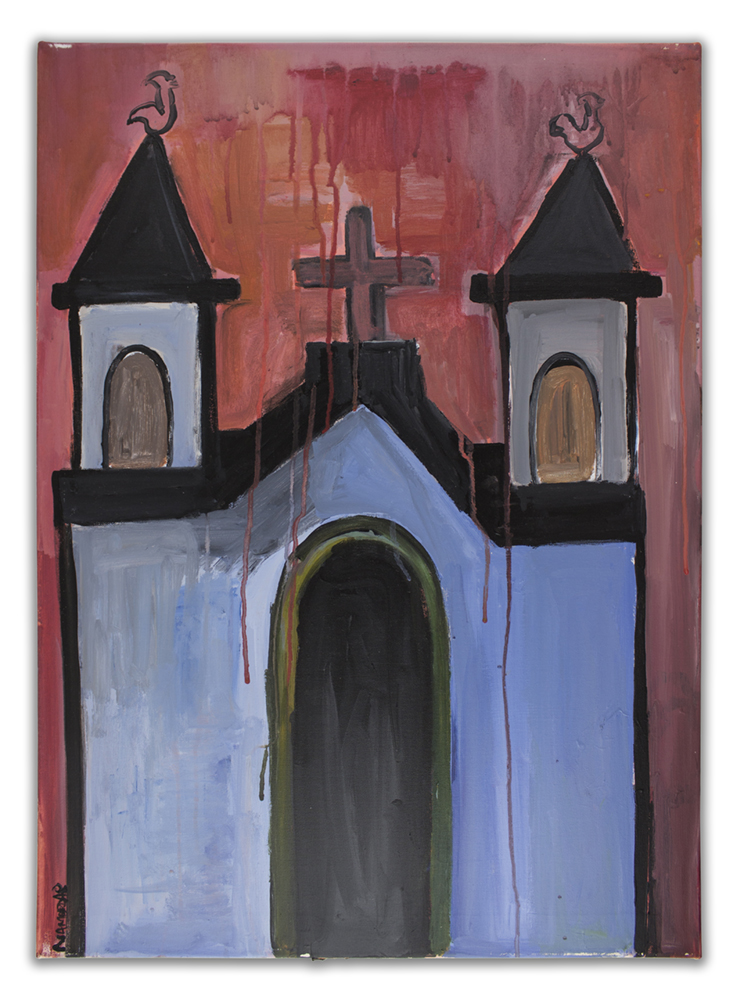 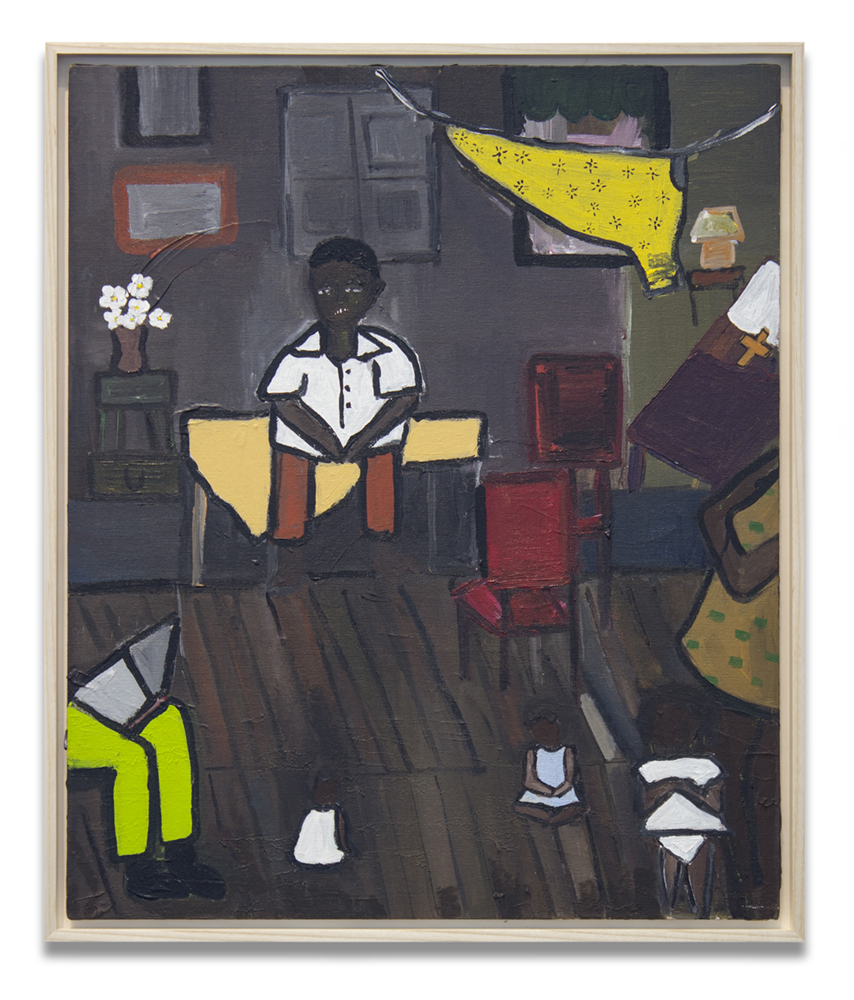 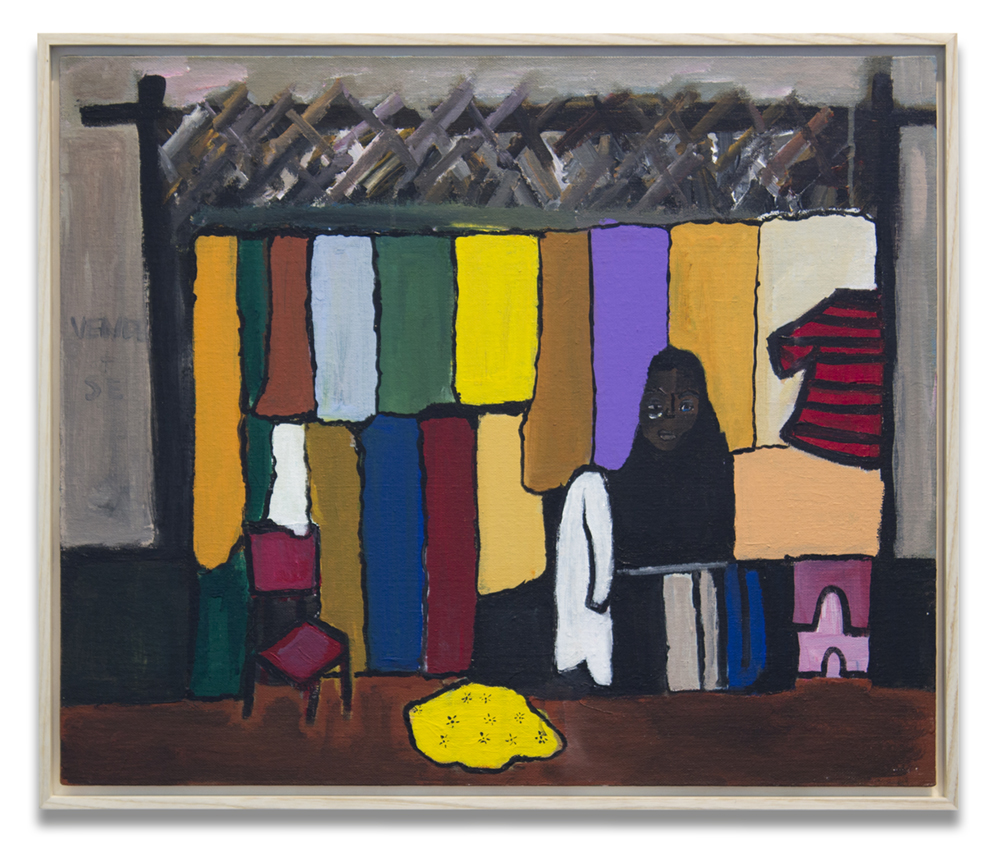 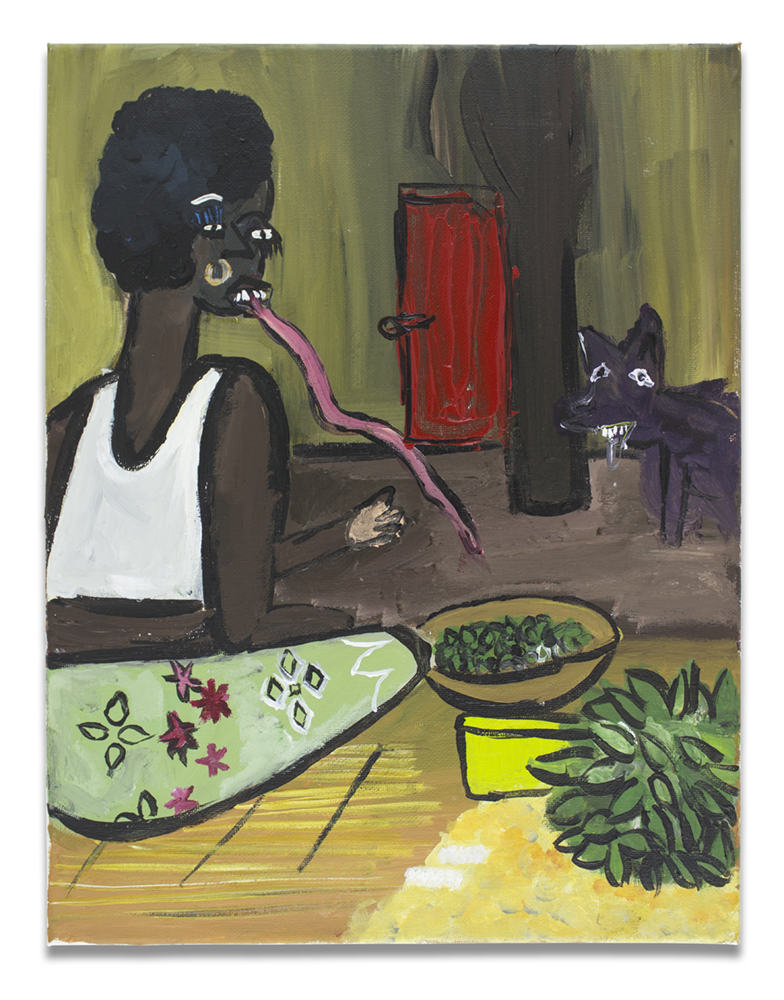 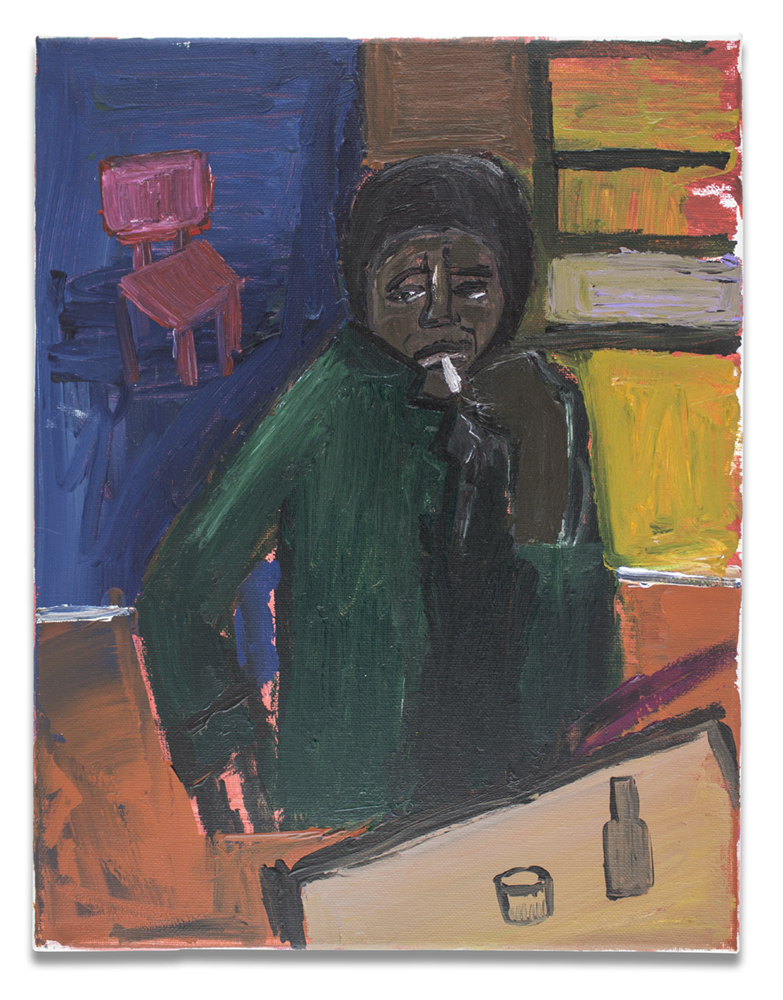 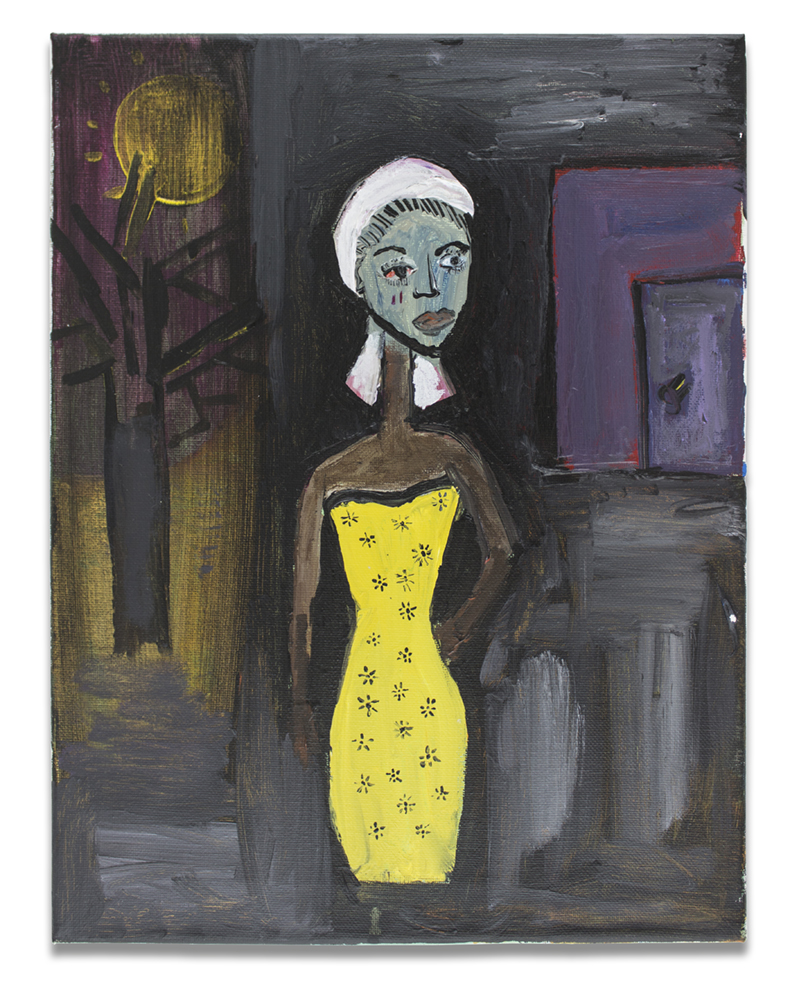 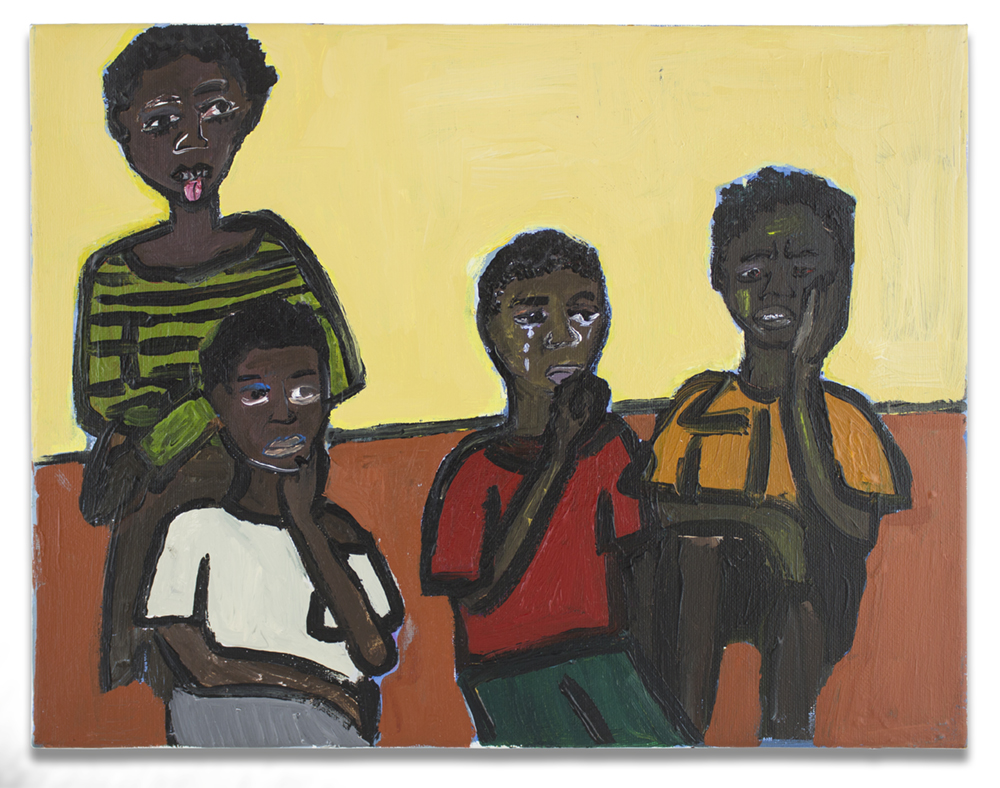 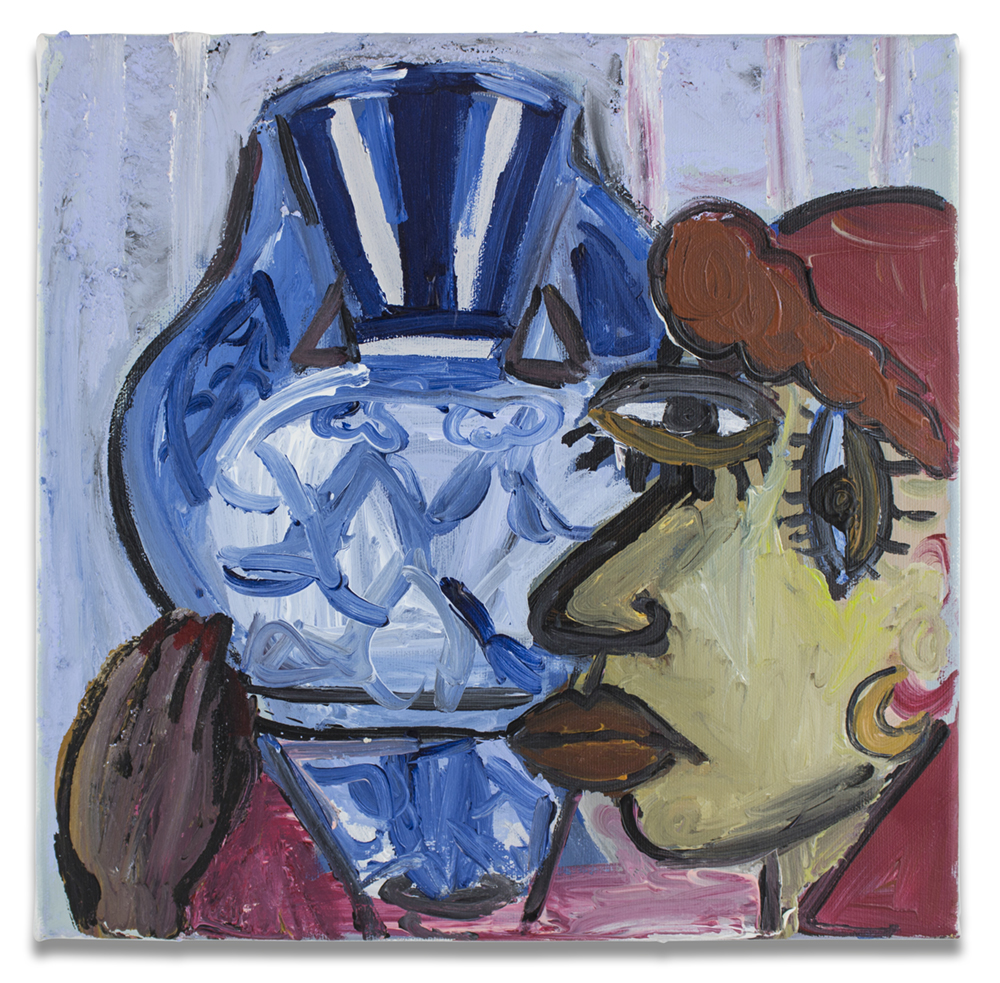 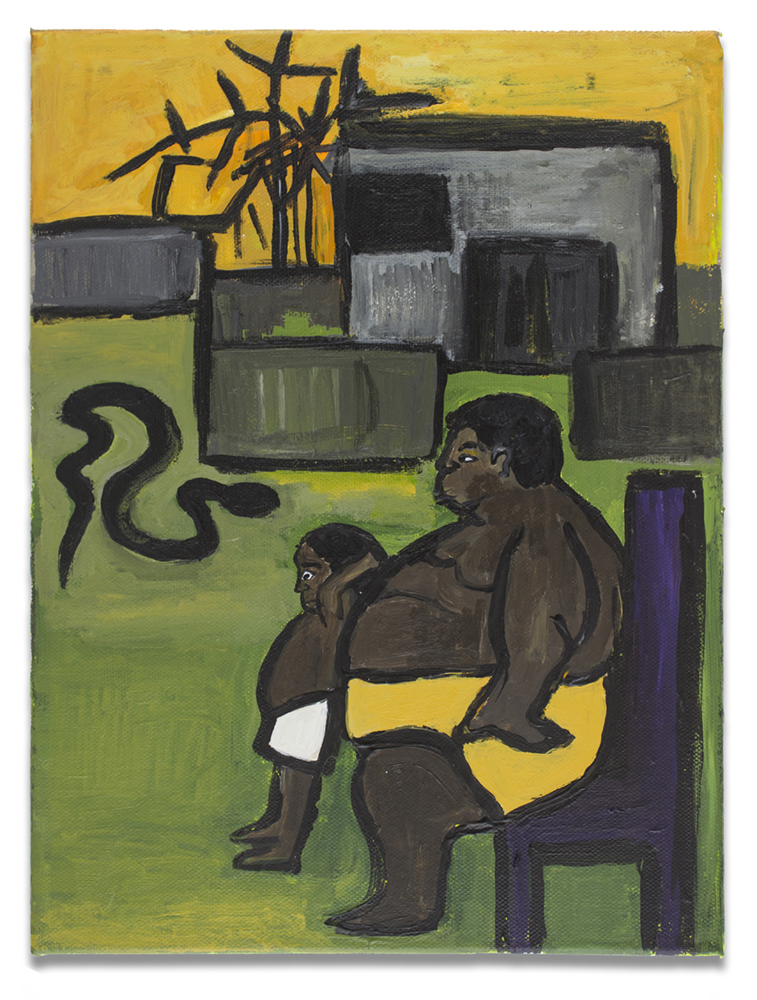 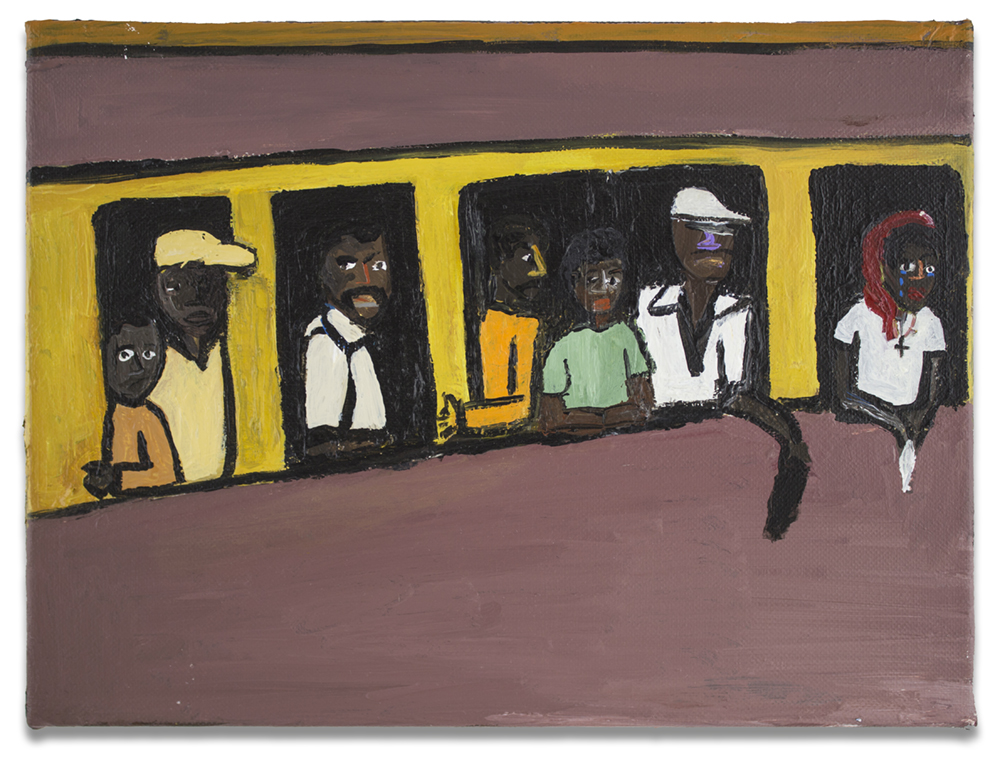 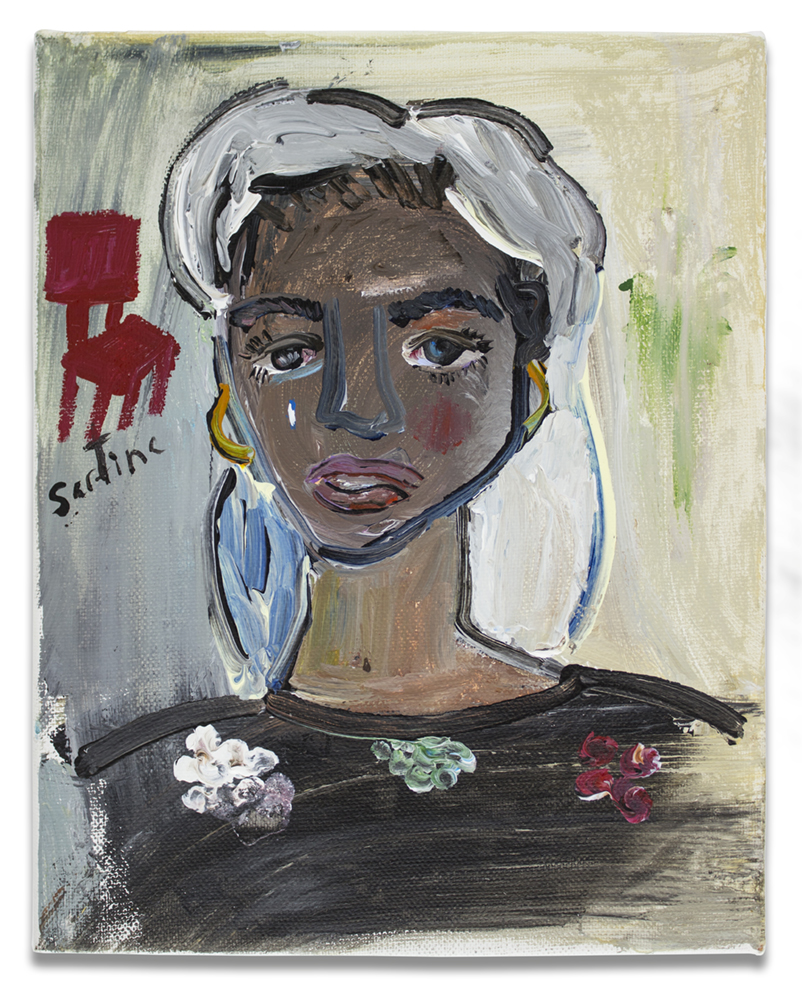 Harper’s Books is pleased to present two concurrent exhibitions of work by the Los Angeles–based painters Simphiwe Ndzube and Cassi Namoda, which will open on July 21 and remain on view through August 15. Featuring a selection of eleven mixed-media drawings and one painting on linen, Simphiwe Ndzube: Dancing into Form will be displayed in the lower level gallery. Cassi Namoda: We Killed Mangy Dog will present two recent series, titled We Killed Mangy Dog and Childe Cas’s Pilgrimage, and will be installed in the upper level gallery. Despite their disparate formal styles, Ndzube and Namoda are united by their inventive approaches to figuration and their engagement with the histories of their home countries of South Africa and Mozambique, respectively. Both exhibitions will be inaugurated with an opening reception, attended by the artists, on Saturday, July 21 from 5 to 8 pm.
_____

Adopting what writer Sean O’Toole has referred to as an “additive aesthetic,” Ndzube collages two- and three-dimensional elements to construct fantastical scenes that subjectively reflect on the context of post-apartheid South Africa. In his dynamic works, fragile, precarious bodies dance and flail, their heads and limbs eviscerated, amputated, or substituted with undulating tentacle-like streaks of ink. Often posed against open-air backdrops, these cavorting figures evoke the traditions of swenking—a display of sartorial style and dancing popular within South Africa’s Zulu communities—and carnival, combining festive and sinister imagery that ambiguously conveys both violence and joy. Grounded in Surrealist strategies of juxtaposition, such puzzling contradictions articulate the volatile circumstances of the artist’s protagonists, resonating with a broader sense of uncertainty at this specific moment in the country’s history.

While Ndzube is well known for his large-scale assemblages, Dancing into Form will represent the first time in which his powerful drawings are brought together for collective consideration. Many of the works on paper featured in this exhibition served as preliminary studies for paintings and resulted from, as Ndzube puts it, a process of “working forward and backward to allow chance to open up avenues for possible compositions for newer work.” This component of the unexpected is a vital aspect of Ndzube’s creative practice, in which compositions arise from the unanticipated collision of subjects and motifs. He has compared this method to “improvised dance,” remarking that drawing “manifests itself as a tool for discovery and a denial of truth,” as opposed to a strategy of direct observation and examination. Akin to this gradual and open-ended approach, Ndzube’s figures are likewise in states of perpetual transformation. As the artist notes, “they are dancing, celebrating, paddling, flying, drunk, and falling, but always in a constant journey to becoming.”
_____

Namoda’s paintings similarly interweave distinct influences and subjects, from personal memories to literary and historical accounts. For her series We Killed Mangy Dog—produced during a recent sojourn to Sintra, Portugal—she drew directly from the 1964 short story collection of the same title by the Mozambican writer Luís Bernardo Honwana. Recounted largely from the perspective of children, Honwana’s narratives address the political and social issues debilitating colonial-era Mozambique, highlighting, in particular, the entrenched racism and inequity maintained by the Portuguese government prior to the country’s independence in 1975. By placing specific characters at the heart of his critique, Honwana incisively tackles the repercussions of colonization on individuals’ psychological states, casting his protagonists as isolated and distraught, subjected to unremitting acts of violence and transgression.

In her reinterpretation of the author’s tales, Namoda likewise centers on certain characters’ subjective viewpoints, conveying their alienation and detachment through the segmentation of limbs and the conflation of multiple perspectives. Across the paintings on view, bodies disappear into the background, depth is collapsed, and space is compressed across brightly hued panels. Like We Killed Mangy Dog, the self-portraits that comprise Childe Cas’s Pilgrimage were painted in Sintra and were inspired by a variety of literary and artistic sources, from Lord Byron’s Childe Harold’s Pilgrimage—a narrative poem, also conceived in Sintra, about a world-wearied traveler—to Pablo Picasso’s Seated Woman series. Here, Namoda humorously casts herself as the noble “Childe Cas” in three distinct emotional states, taking formal cues from graphic illustrations and synthetic Cubism, while engaging with representations of women of mixed African and European descent. With rawness and intimacy, she deftly deploys thickly defined outlines, coarsely applied brushstrokes, and un-contoured surfaces to evoke the otherworldly, the subjective, and the allegorical in each unique body of work.
_____

Simphiwe Ndzube was born in South Africa and currently lives and works between Los Angeles and Cape Town. He studied at the Peter Clarke Art Centre and the Michaelis School of Fine Art at the University of Cape Town, graduating from the latter with a BAFA in 2015. Ndzube’s recent solo exhibitions include Becoming at WHATIFTHEWORLD Gallery, Cape Town (2016); Bhabharosi at Nicodim Gallery, Los Angeles (2017); and Waiting for Mulungu at Cc Foundation, Shanghai (2018). He is represented by Nicodim Gallery.

Born in Maputo, Mozambique, Cassi Namoda is an artist, curator, and fashion designer based in Los Angeles. Her recent solo exhibitions include Island of Earth at Front Room Gallery, Los Angeles (2017), Meat Is Meat + Our Nightly Bread at OOF Books, Los Angeles (2017), and Bar Texas 1971 at Library Street Collective, Detriot (2018).