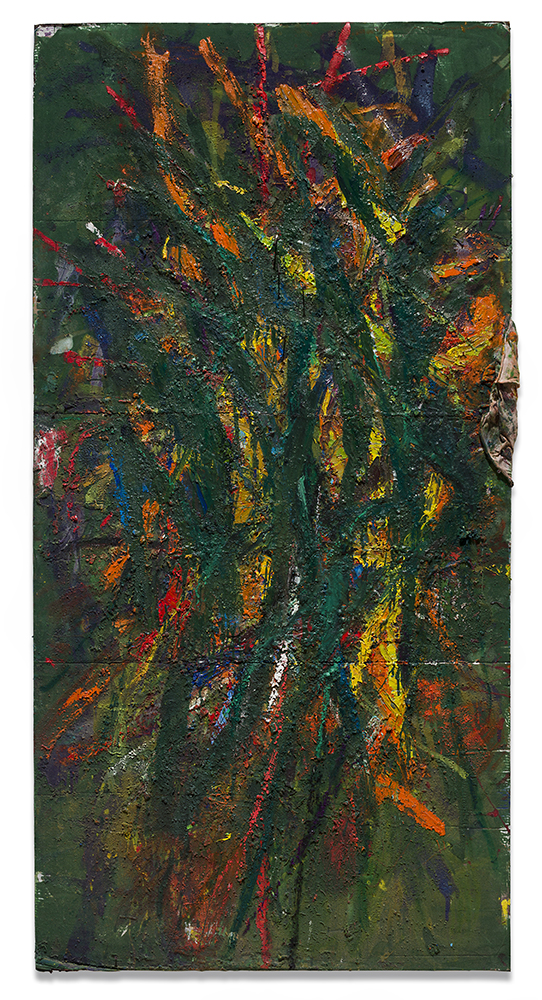 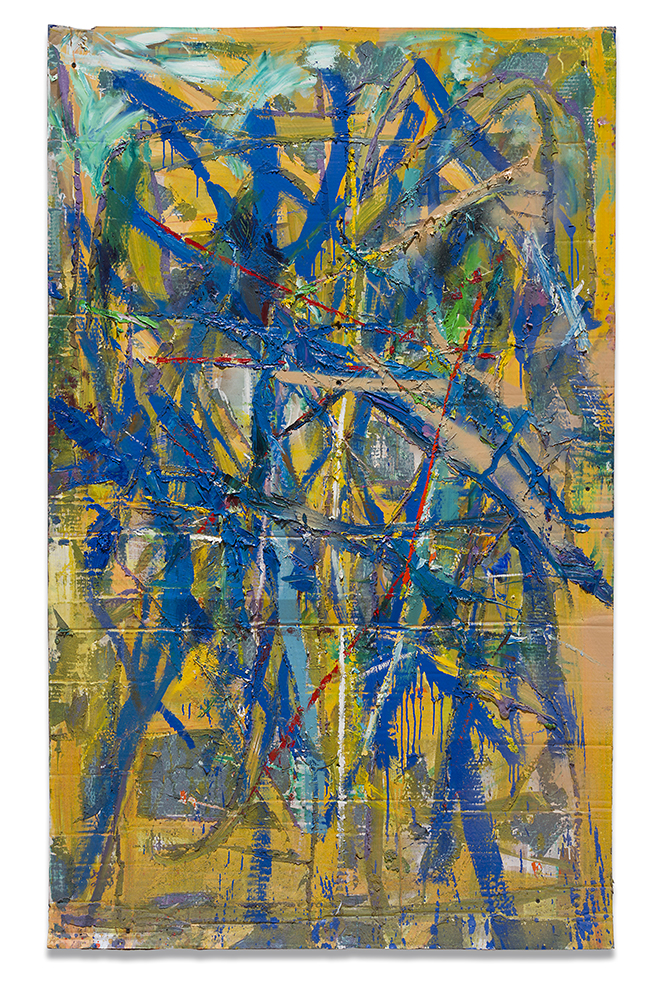 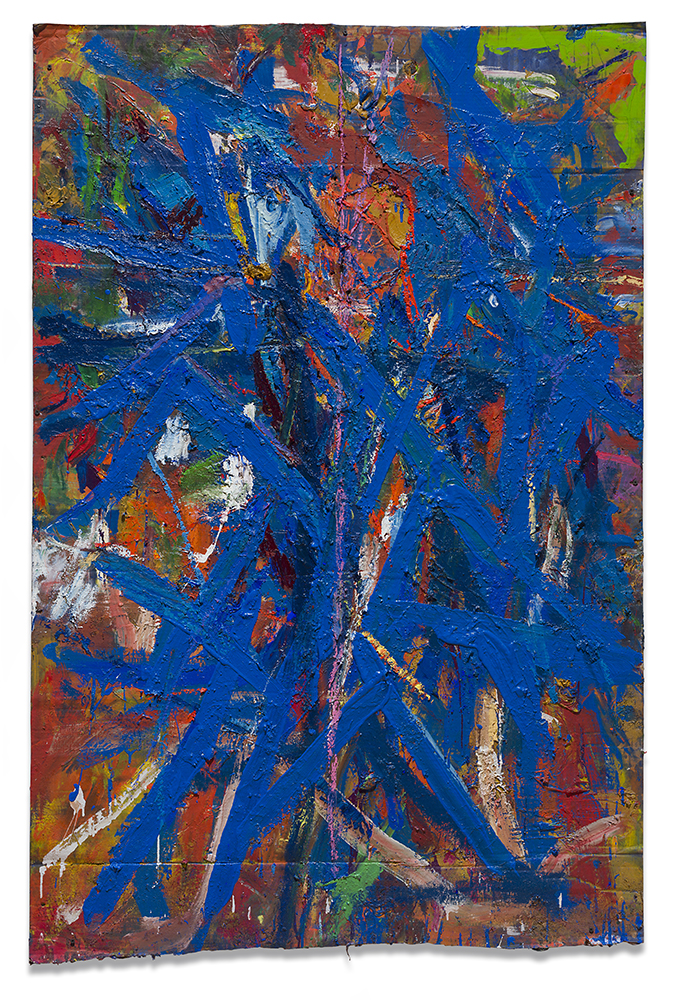 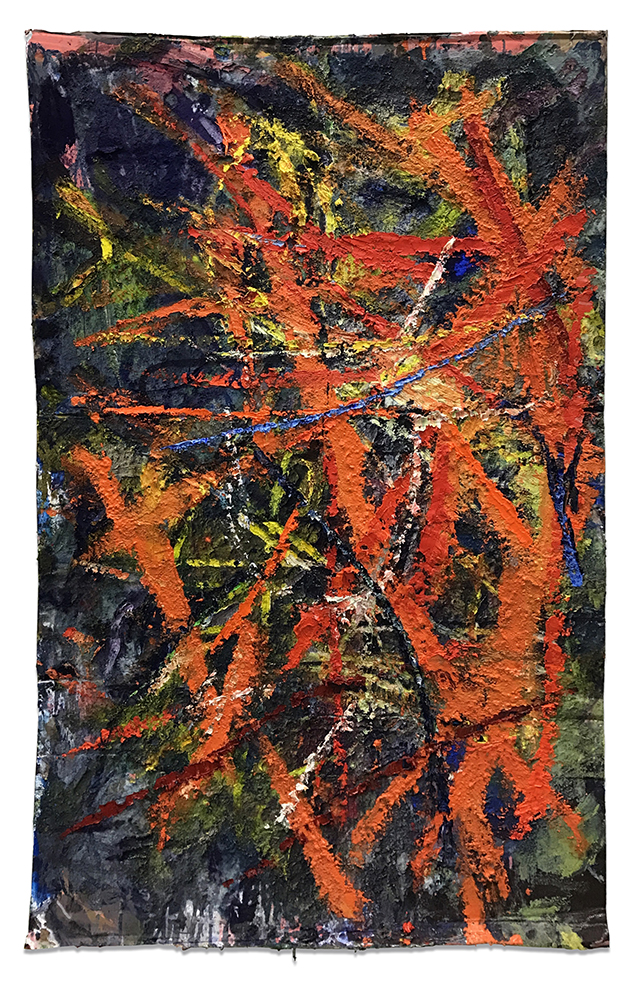 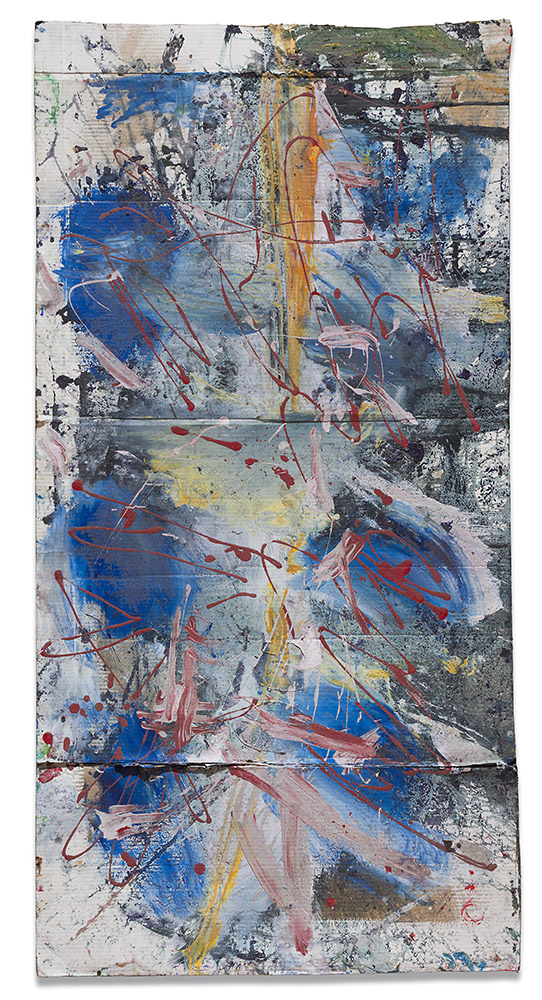 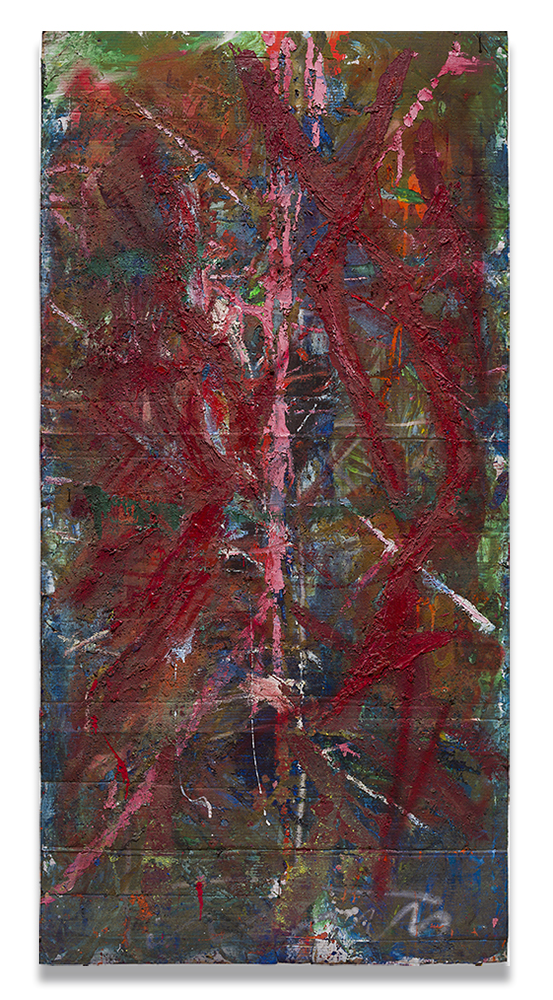 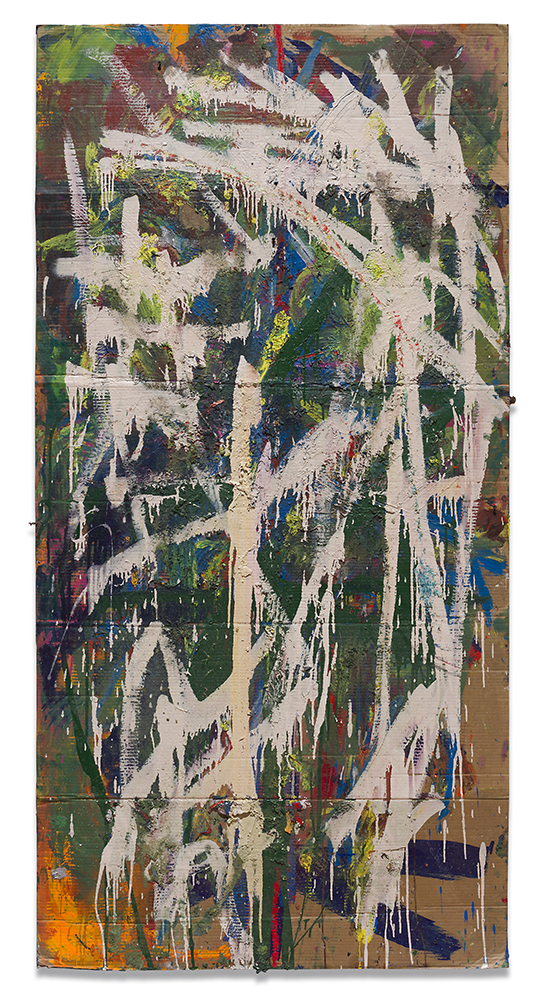 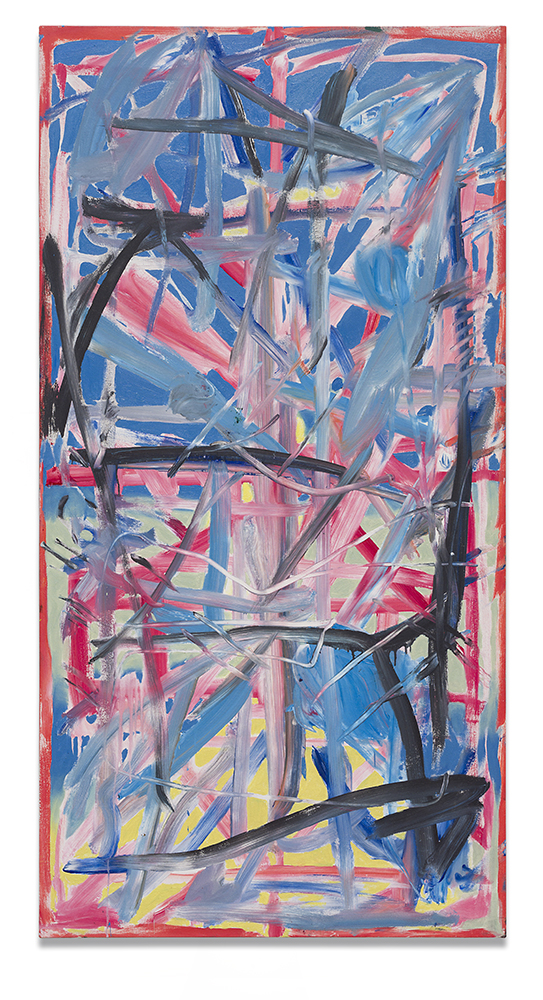 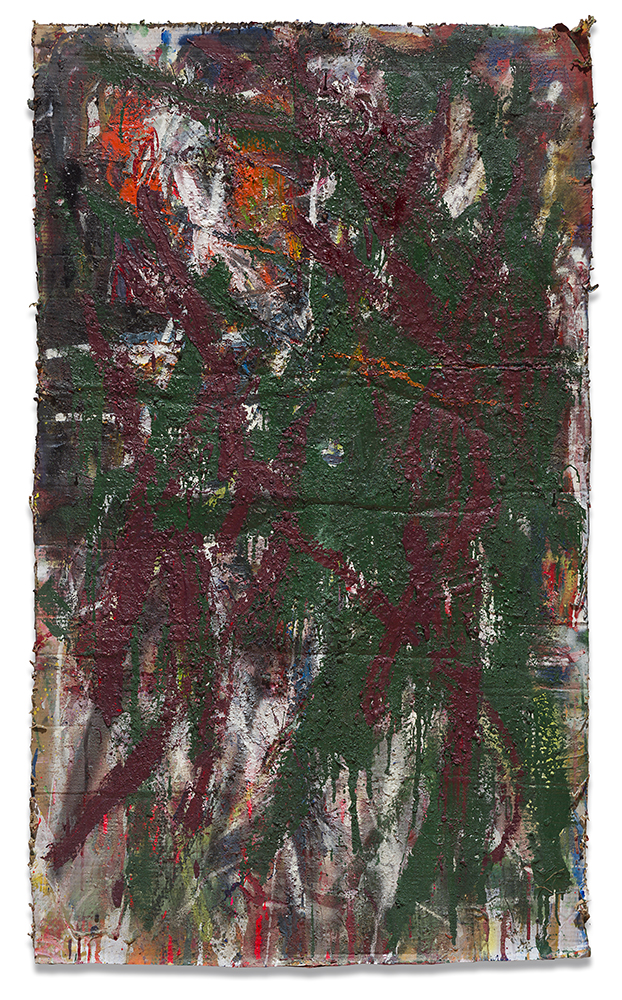 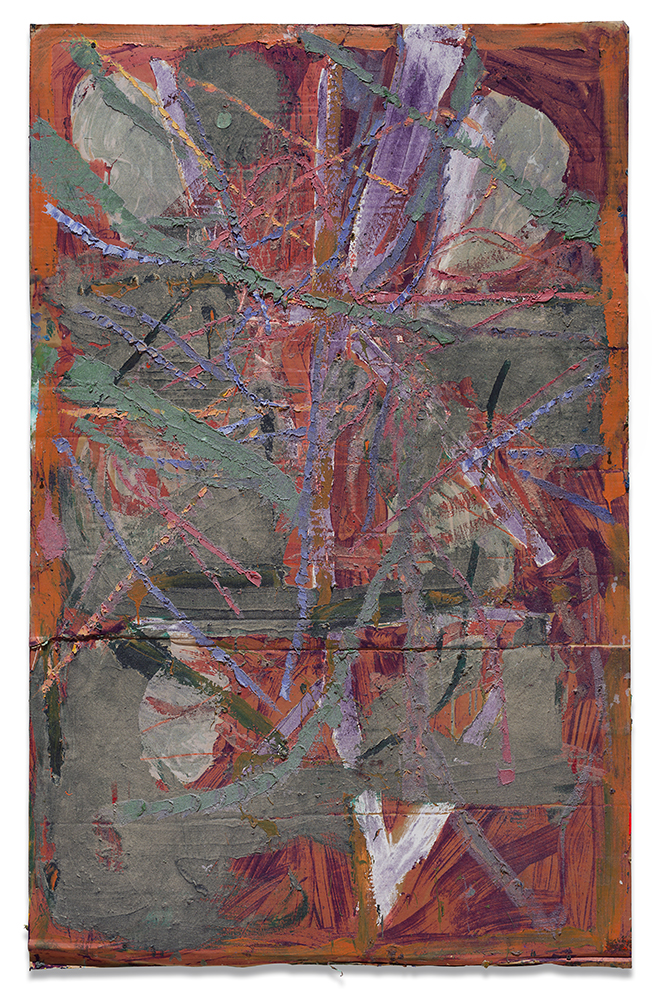 Using a combination of raw pigment, oil, acrylic, enamel, and spray paint, Lewis makes aggressive impasto paintings on large cardboard substrates, elevating the utilitarian material through his artistic interventions. Multiple coats of bold hues are confidently slapped on the corrugated surfaces—in certain cases executed directly with his fingers and hands—to create an all-over effect. Skeins of flocked pigment coagulate, ooze, drip, and cake over visibly built-up layers, as if his work was mimicking healing flesh. The scale and proportion of his compositions evince the human figure, vertically oriented and looming over the viewer when mounted to the wall. Framed within an immersive picture field, his loose and traversing brushwork echoes techniques found in graffiti art and street tagging. The influence of postwar gestural abstraction also plays a pivotal role in the work, channeling the frenetic energy of Franz Kline, Willem de Kooning, and Jules Olitski. Lewis’ approach to the medium is a reflection on the process of painting itself. Bristles and rags are adhered to the face of some sheets like abandoned detritus, while screw holes and hardware have been intentionally integrated into the compositions. Remainders and markings of Lewis' physical practice continue to accumulate onto his surfaces until the moment of their installation, rendering his painterly objects as repositories of their own history. When presented altogether, Violet Paintings for the Red and Blue Studio induces an experience of being enveloped by painting, as if the act of observation was from within rather than without.

Born in 1979, Spencer Lewis completed his BFA from the Rhode Island School of Design, and his MFA from UCLA. His work has been featured in solo exhibitions at Mier Gallery (2016) and Edward Cella (2014), and he has participated in several group exhibitions in and around Southern California. Lewis currently lives and works in Los Angeles, CA.