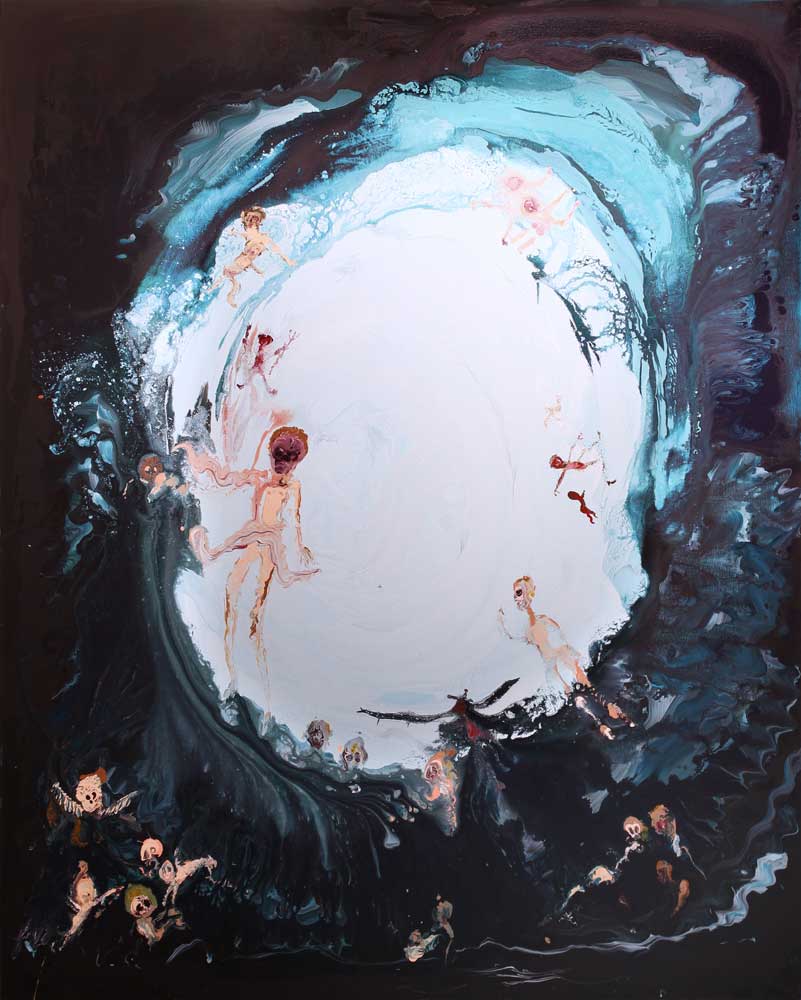 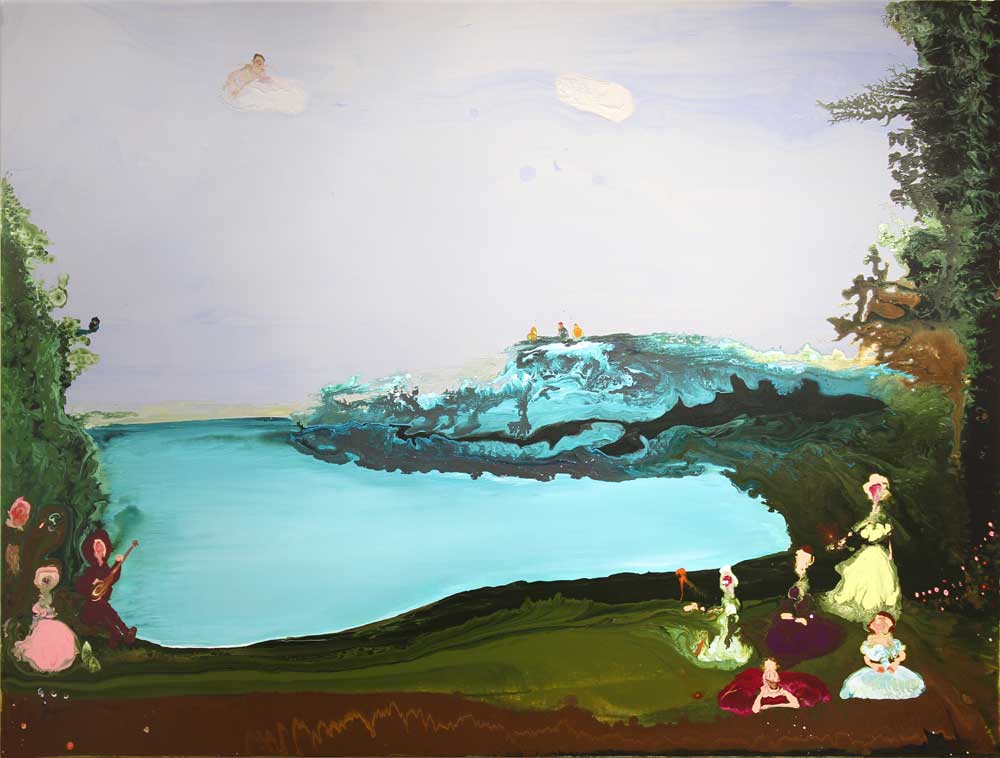 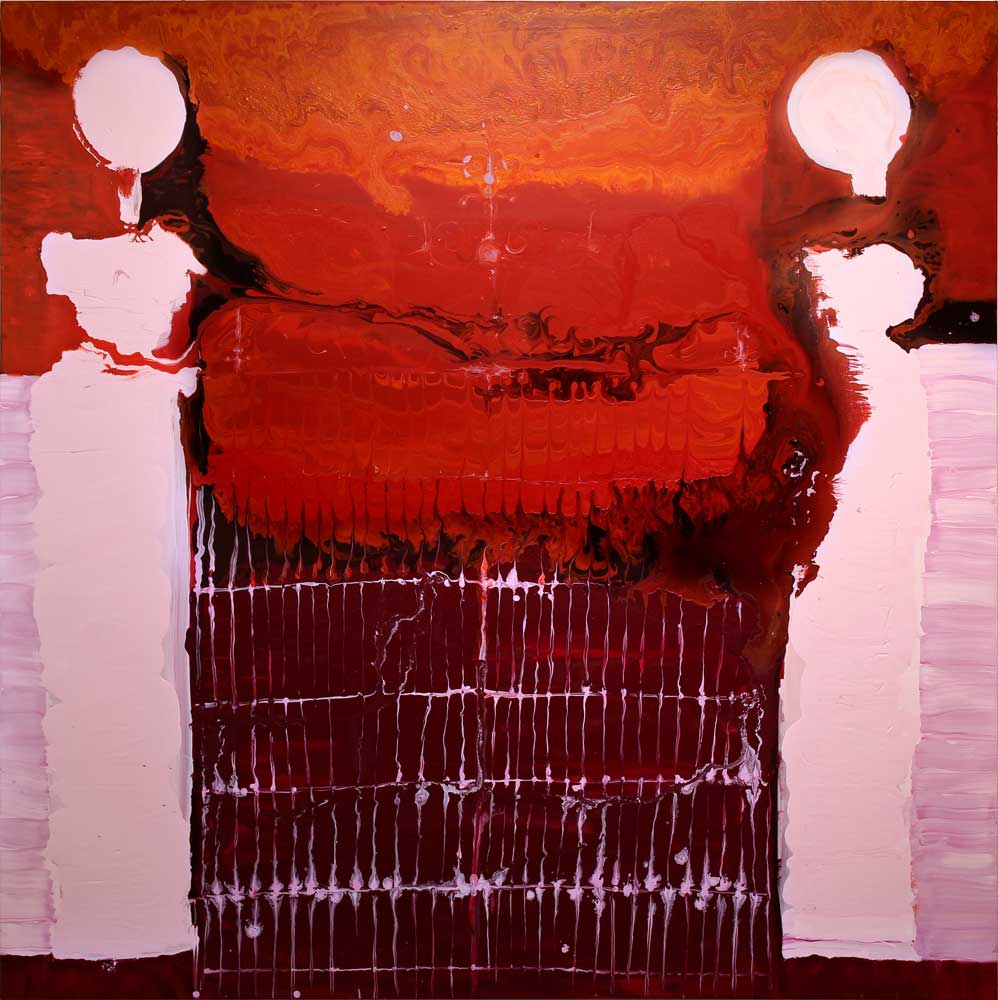 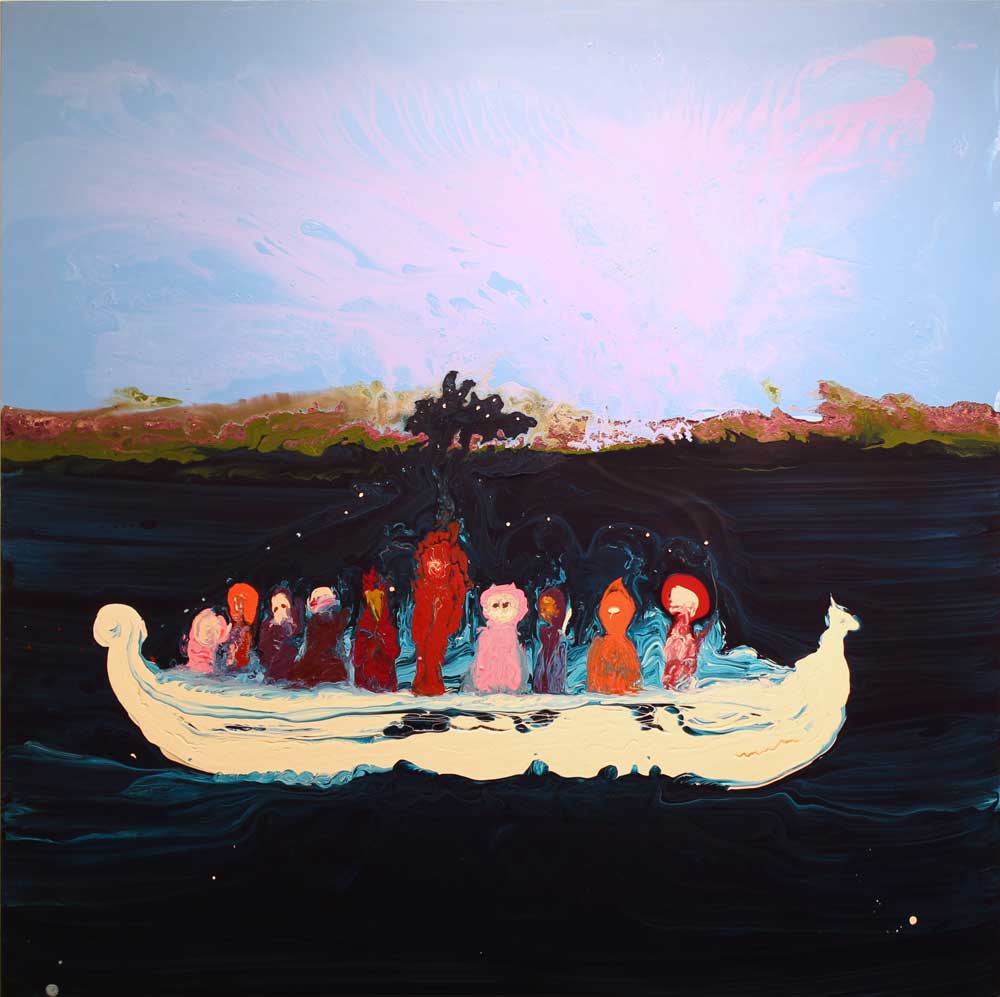 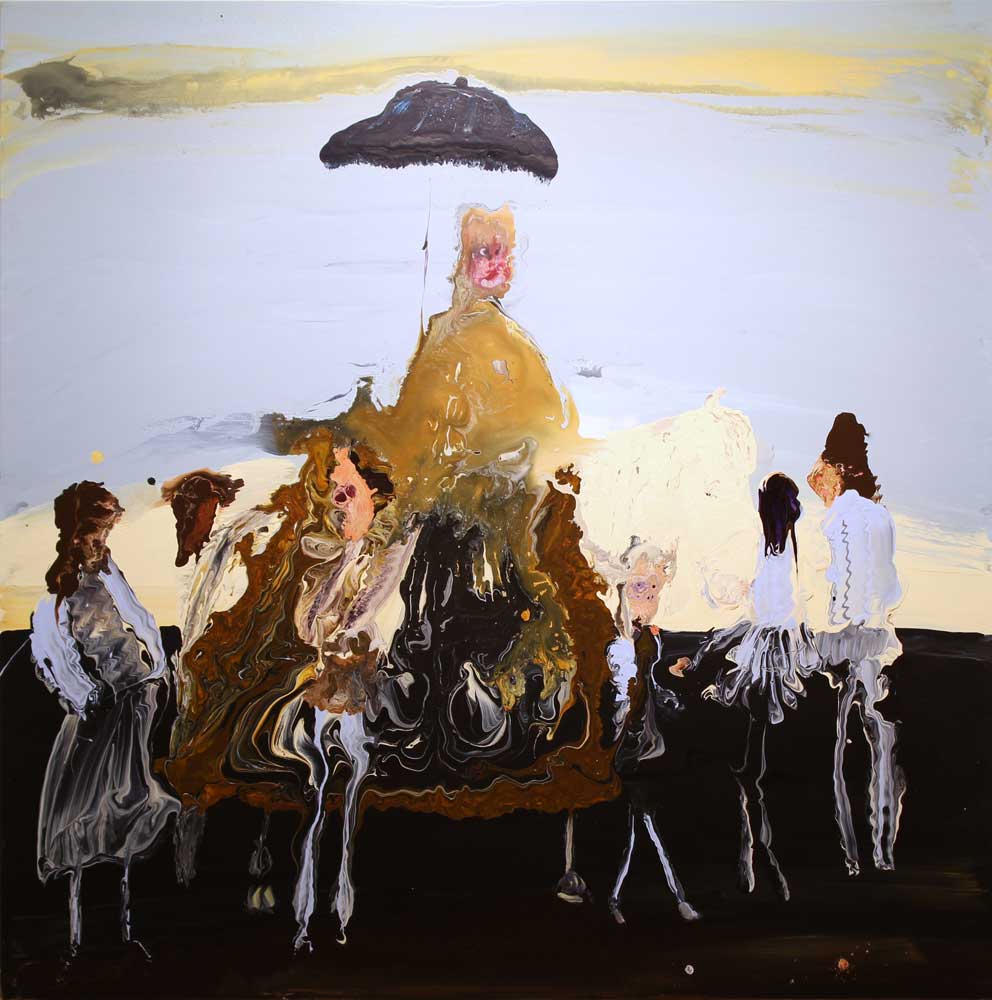 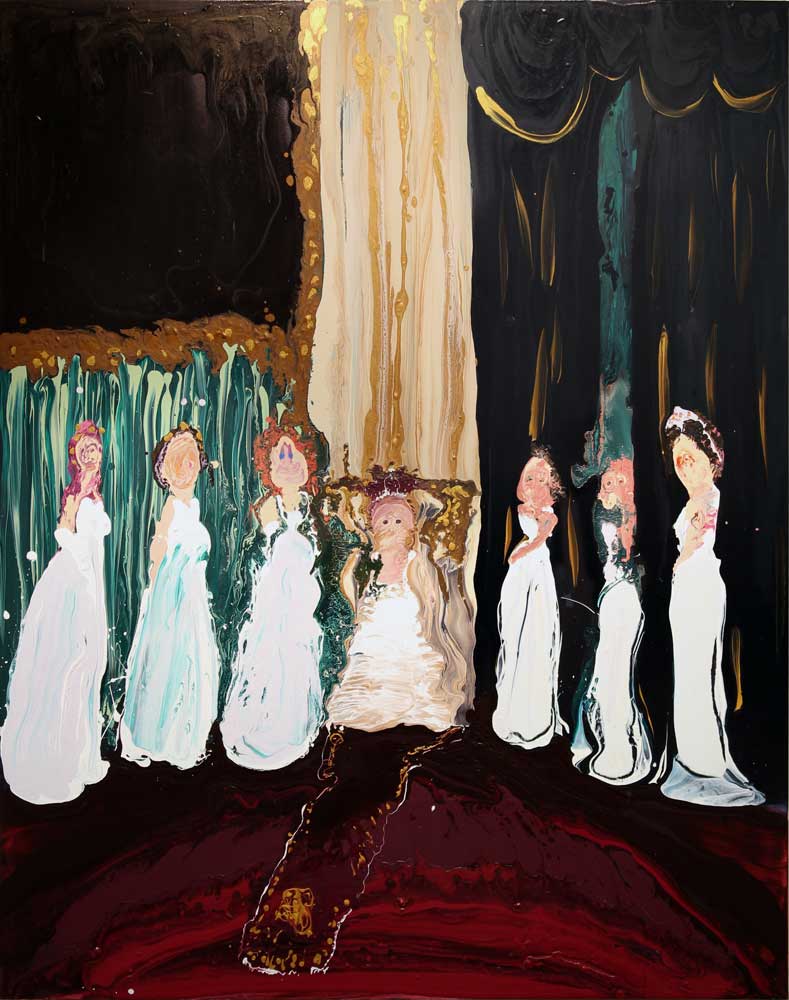 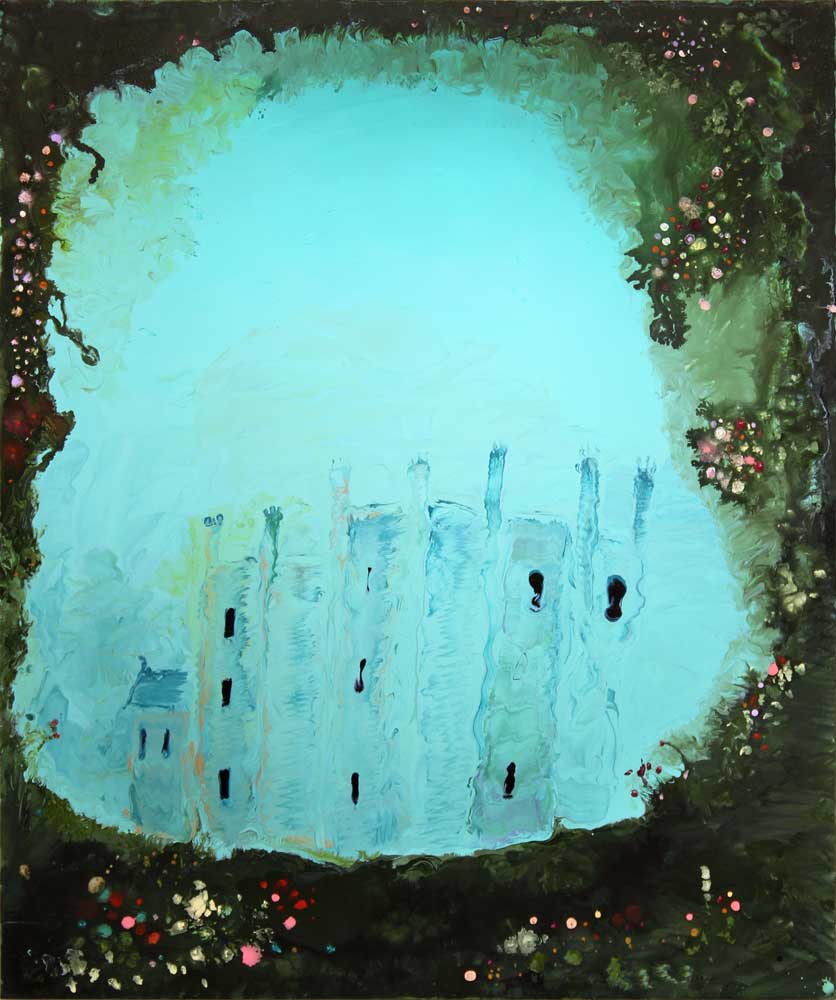 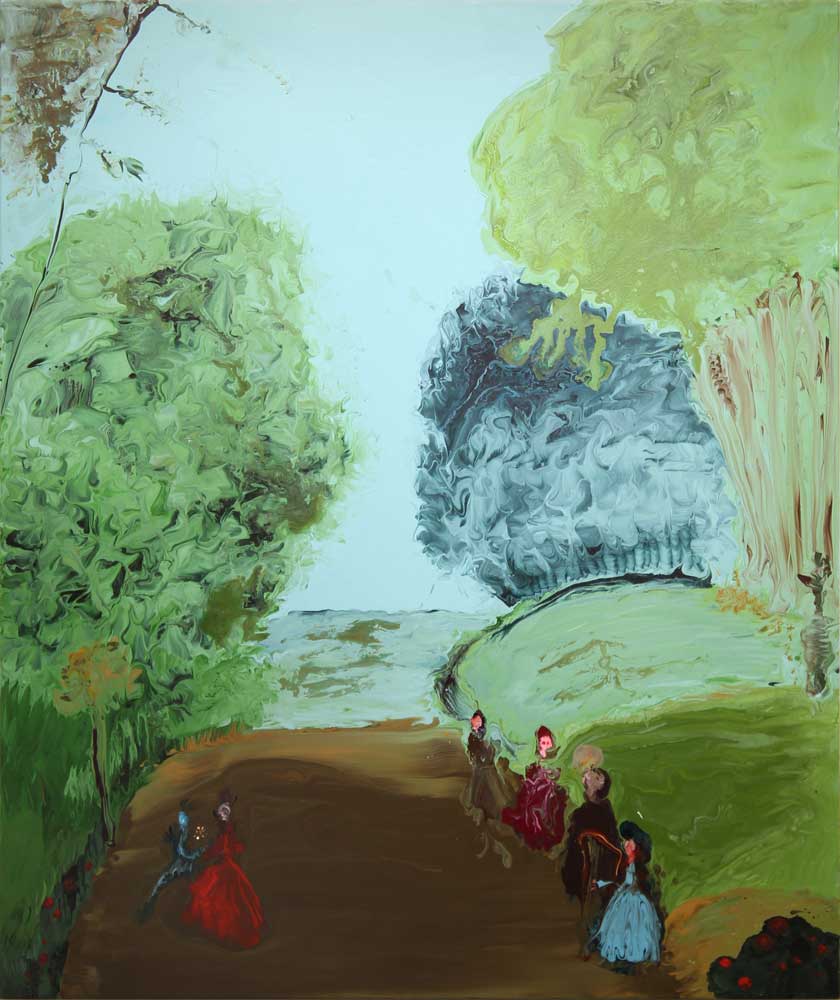 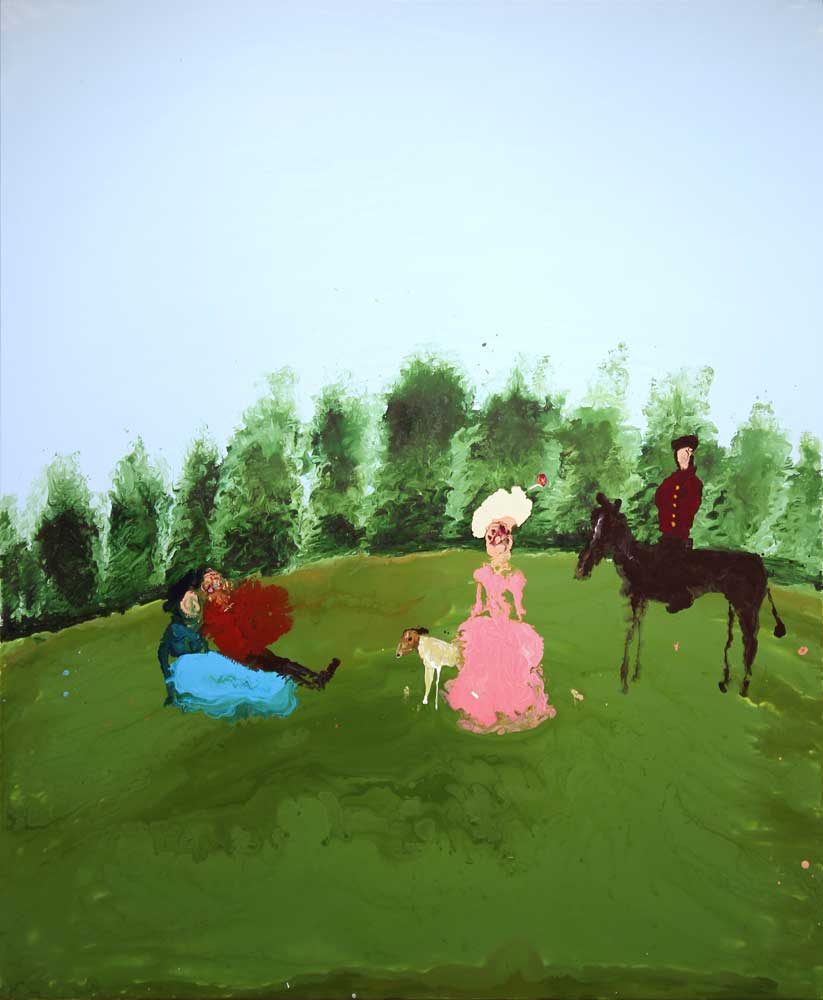 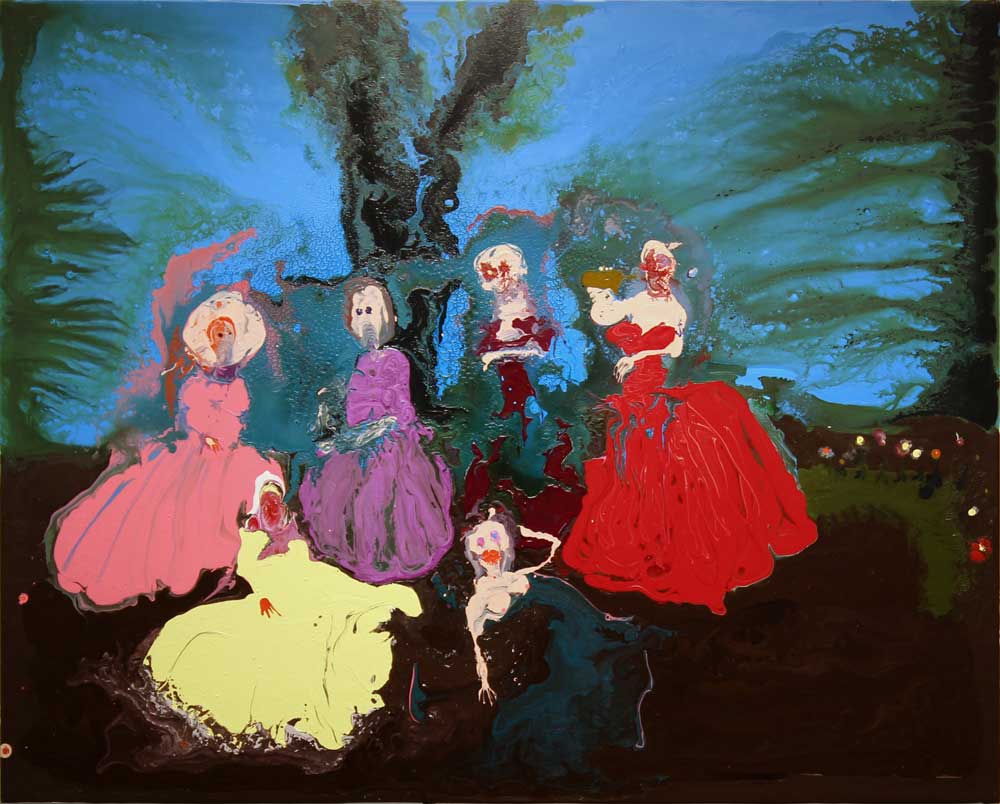 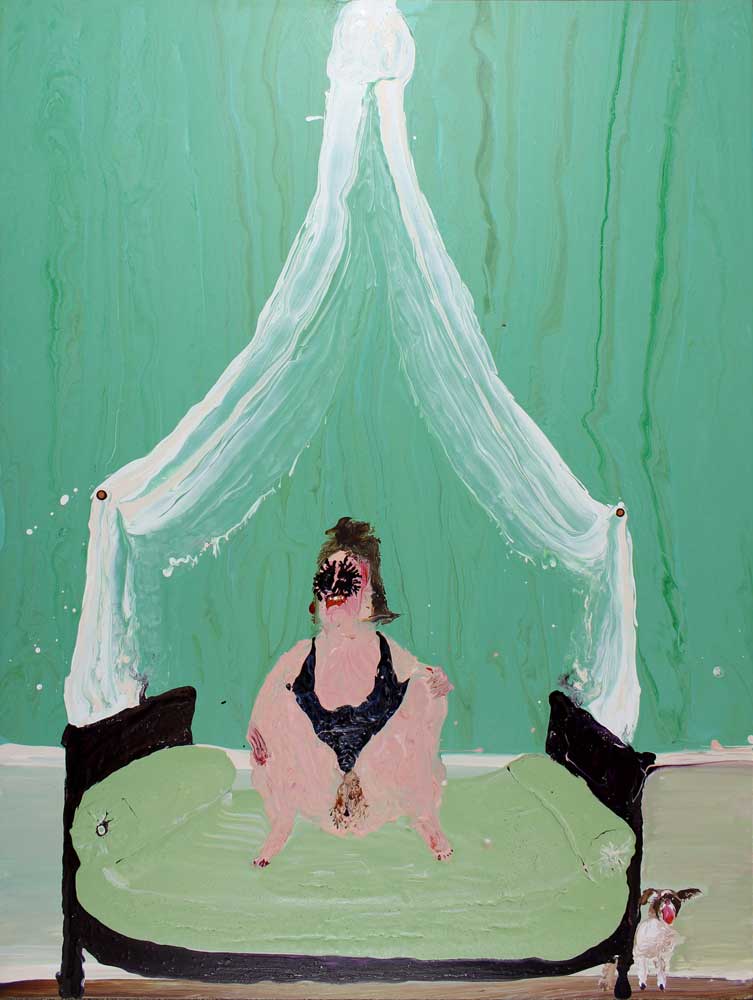 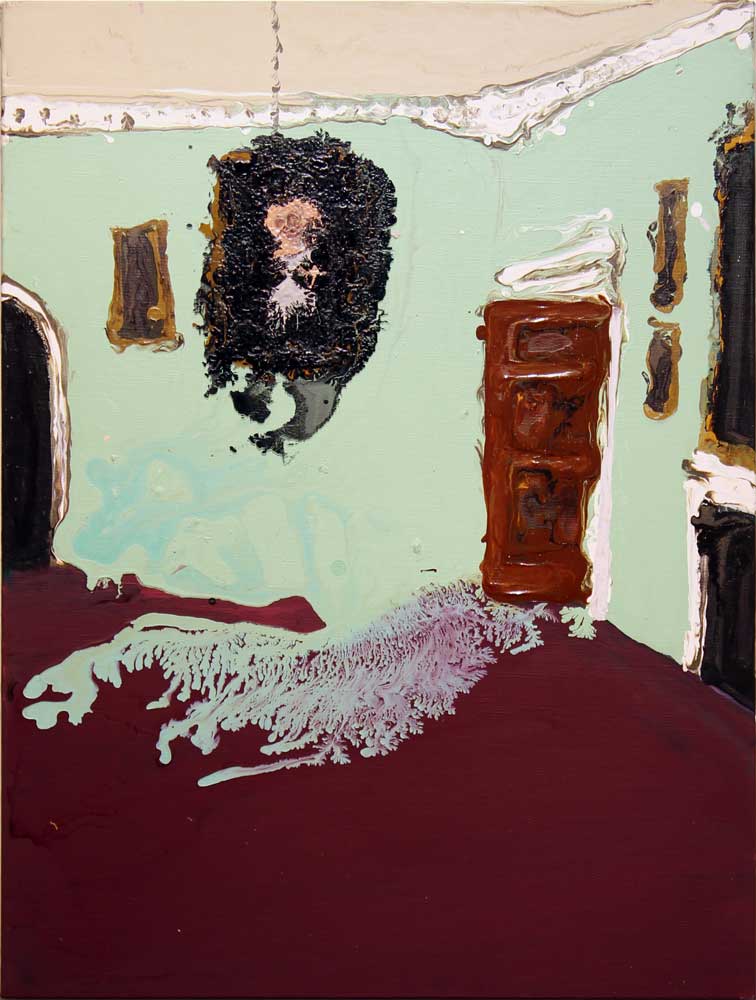 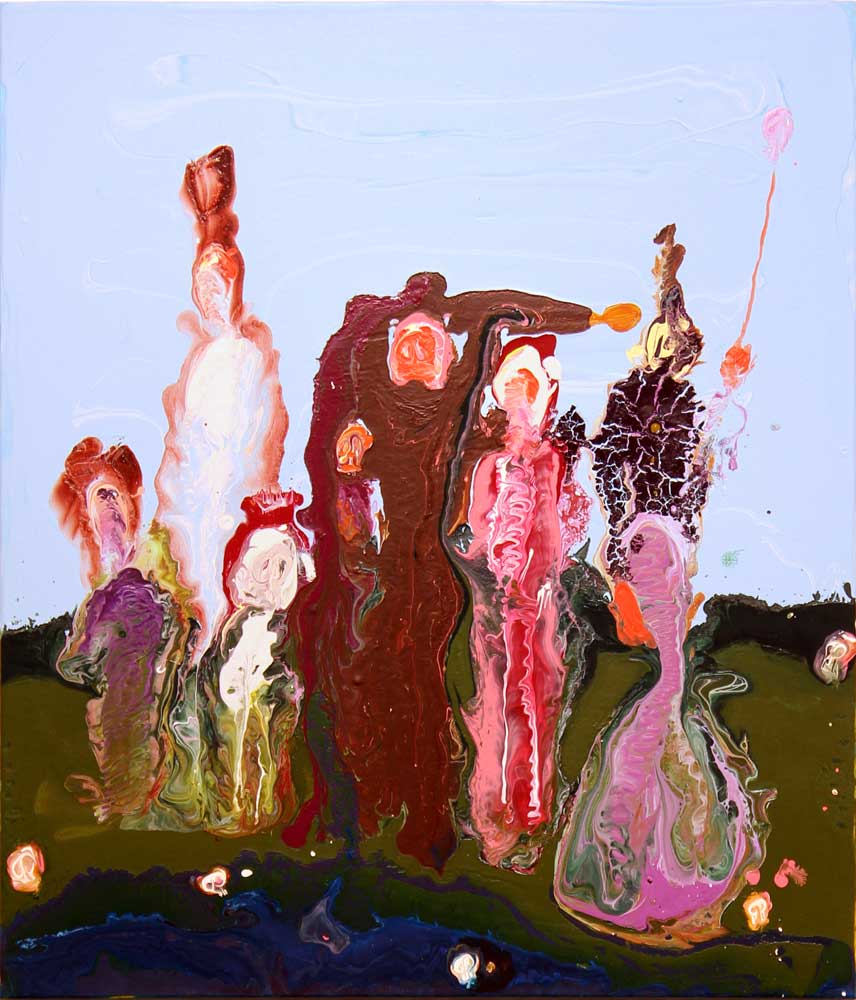 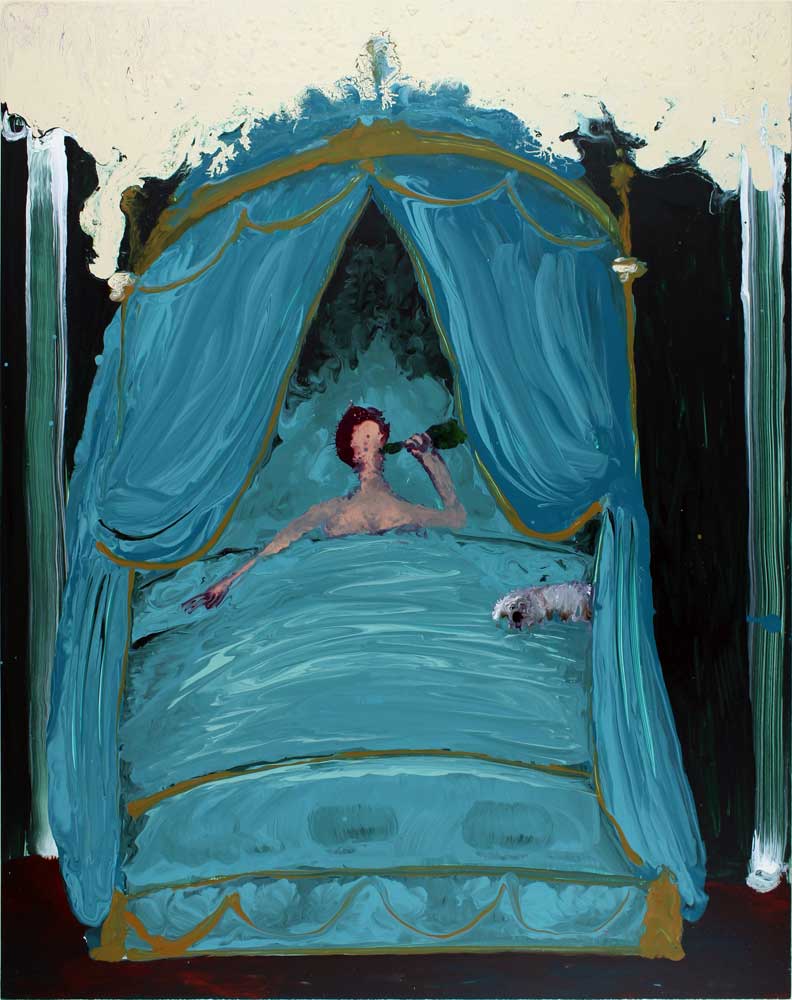 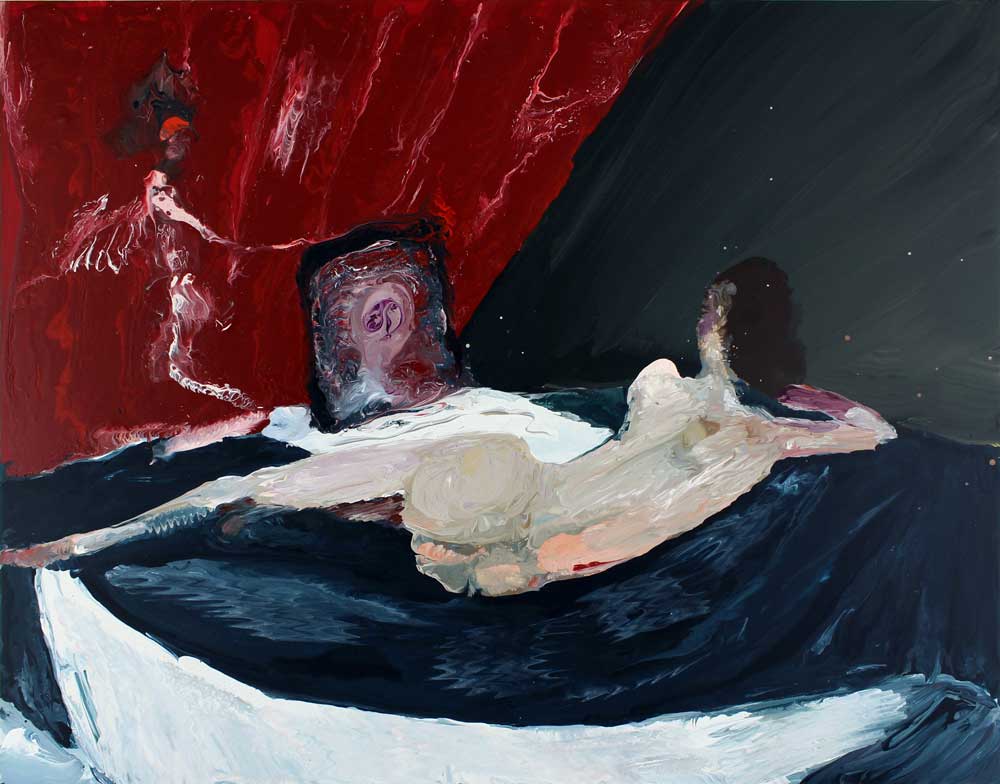 Harper’s Books is pleased to announce Heavy Metal Picnic, an exhibition of work by Irish painter Genieve Figgis. This presentation marks the second solo show of Figgis’s paintings at Harper’s Books since her United States debut, Yes Captain, at the gallery in July 2014 and her precipitous rise in international acclaim over the past two years. Featuring a selection of sixteen acrylic works, this exhibition marks a continuing evolution in Figgis’s otherworldly oeuvre, in which her delirious depictions of eighteenth-century debauchery and dreamlike scenery are transposed from more intimate, modest proportions to a far vaster and immersive scale. Heavy Metal Picnic will open with a reception attended by the artist, on Saturday, July 2, and will be on view at Harper’s Books through August 10.

As Roberta Smith noted in her 2014 New York Times review of the artist’s exhibition Good Morning, Midnight at New York’s Half Gallery, Figgis’s paintings are “nastily entertaining pieces of work.” Brandishing a scathing sense of humor and a penchant for the absurd, Figgis depicts eighteenth-century noblemen, monarchs, and ladies-in-waiting as farcical, stripping royal figures of their dignity and melting away the masquerade of propriety. In wildly vibrant canvases, half-dressed noblewomen in petticoats pose and flounder atop muddy pastures, while naked damsels perch, legs agape, on divans and guzzle libations inside canopy beds. The eighteenth-century elite have long been among Figgis’s favored subjects, which have included, in earlier works, aristocrats with elaborately coiffed hair, scenes of decadence and depravity, ethereal Gothic interiors, and glorious sendups of rococo and baroque masterpieces. In Las Meninas After Velázquez and Venus at Her Mirror After Velázquez, Figgis borrows liberally from the Spanish painter, drowning his famed Las Meninas and Rokeby Venus in oozing pools of paint, the once-commanding figures at turns ghostly and surreal. The regal scene of Las Meninas is relegated to caricature, while the luxuriant, and controversial, nude Venus—the original was denounced by the Church and physically attacked by suffragettes—is re-envisioned as pallid, emaciated, and corpselike. Like Velázquez’s artist at the easel, Figgis engages with the histories of the power dynamics at play within figurative painting and the latently subversive potential of her medium of choice.

At a moment when, despite our predominantly digital culture, both the figure and painting have regained popularity, Figgis revels in the liberating and tactile characteristics of acrylic, allowing it to trickle, drip, cake, and crack in daubs, sinuous brushstrokes, and supple, gliding skeins of paint. Faces lose their defining attributes—becoming mere swirls of facial features—and bodies are reduced to wisps with, in some cases, only an outline to suggest the presence of a human frame. Despite this lack of naturalistic detail, Figgis’s paintings are exceedingly elaborate and textural, layered with brilliantly hued patterns of marbleized acrylic that appear at once highly controlled and entirely accidental. Showcasing these aspects of her work in full swing, Heavy Metal Picnic highlights the artist’s acute sensitivity to form and art historical legacies, while revealing her adroit handling of her medium on a stunningly larger scale.

Genieve Figgis received her bachelor’s degree in fine art from the Gorey School of Art in Wexford, Ireland, in 2006 and her master’s degree in fine art from the National College of Art and Design in Dublin in 2012. After exhibiting her work in solo shows at Studio 9, Wexford (2012); Talbot Gallery, Dublin (2013); and Transition Gallery, London (2014); Figgis acquired an international following by means of her Twitter and Instagram accounts, which attracted the attention of Richard Prince, among numerous other artists, collectors, and critics, who touted her unique aesthetic by sharing images of her paintings on social media. As a result of this initial contact, Figgis exhibited her work at Harper’s Books in 2014, making her celebrated United States debut with Yes Captain in 2014, followed by the presentations Good Morning, Midnight at Half Gallery, New York, in 2014 and All the Light We Cannot See at Almine Rech Gallery, London, in 2015. Her first book, Making Love with the Devil, was published by Fulton Ryder in 2014, and her work has been written about in the New York Times, ARTnews, Vice, Artsy, GQ, W Magazine, Vanity Fair, and Artforum, among other publications. Recently, she collaborated with the Metropolitan Opera to create an animated film, set to Gaetano Donizetti’s Roberto Devereux, for the Gallery Met Shorts series. Figgis is currently based in County Wicklow, Ireland.